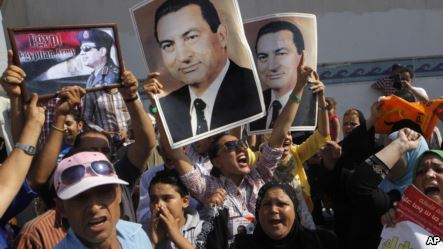 CAIRO — As a helicopter ferried ex-president Hosni Mubarak from prison to house arrest on Thursday, the case has raised questions whether Egypt is headed forward – or back to its past.

Mubarak’s release from jail of  has briefly overshadowed the continuing security crackdown on the Muslim Brotherhood, many of whose members are in detention, hiding or on the run.

Mubarak was taken to a military hospital in Cairo. The military-installed government has ordered him held under house arrest after a court said he could no longer legally be held behind bars.

He is still facing trial on murder and corruption charges linked to his 30 years in power, including charges that he failed to stop the killing of protesters during the 2011 uprising that ended his rule.

Supporters of the Islamist group, and many others who rebelled against Mubarak in 2011, are appalled by his release from prison.

“He appealed to the highest court in Egypt, which is the legal court procedure and then they send it back to another court to look at it from the beginning, which is normal procedure in Egypt for anybody,” he said.

But what is considered normal here in Egypt can be tricky.

A nation ruled by generals for nearly 60 years, and after a brief experiment with a freely elected president – the now-detained Mohamed Morsi – is now back under military-selected leaders.

“The fact is the president of Egypt, both military and Muslim Brotherhood, are the subject of judicial proceedings which could see them go to jail,” said Adam Ereli, a former U.S. ambassador. “So the larger question is, what does this say about the development of Egypt’s future, Egypt’s political system?”

Egyptian activists say recent events return Egypt not just to the days before the 2011 uprising, but all the way back to the 1950’s, to the military overthrow of the king and another crackdown on the Brotherhood.

General al Yazal dismisses the notion, saying the 2011 revolution carries on, but with the added popular will as expressed in the mass anti-Morsi, pro-military rallies of the past months.

“Yes, I think it is continuing,” he said. “But the 30th of June Revolution as well is a new era, a new direction for the complete action of the 25th of January 2011 revolution.”

He also refers to a “July 26th Revolution,” the day the military asked for a popular mandate to “restore security,” widely seen as a fight against the Brotherhood that officials now call a “war on terrorism.”

Some who took to the streets now wonder what those mass protests were for.