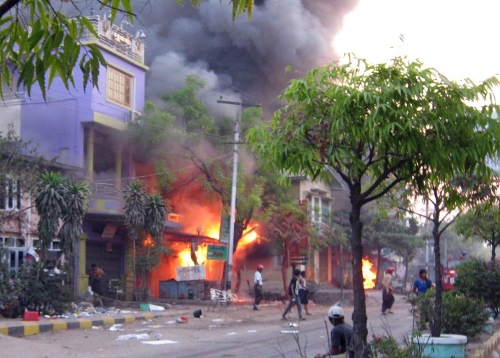 (MENAFN – Arab News) MEIKHTILA, Myanmar: Their bones are scattered in blackened patches of earth across a hillside overlooking the wrecked Islamic boarding school they once called home.

Smashed fragments of skulls rest atop the dirt. A shattered jaw cradles half a set of teeth. And among the remains lie the sharpened bamboo staves attackers used to beat dozens of people to the ground before drowning their still-twitching bodies in gasoline and burning them alive.

The mobs that March morning were Buddhists enraged by the killing of a monk. The victims were Muslims who had nothing to do with it – students and teachers from a prestigious Islamic school in central Myanmar who were so close to being saved.

In the last hours of their lives, police had been dispatched to rescue them from a burning compound surrounded by swarms of angry men. And when they emerged cowering, hands atop their heads, they only had to make it to four police trucks waiting on the road above.

What happened on the way is the story of one of Myanmar’s darkest days since this Southeast Asian country’s post-junta leaders promised the dawn of a new, democratic era two years ago – a day on which 36 Muslims, most teenagers, were slaughtered before the eyes of police and local officials who did almost nothing to stop it.

And what has happened since shows just how hollow the promise of change has been for a neglected religious minority that has received neither protection nor justice.

The president of this predominantly Buddhist nation never came to Meikhtila to mourn the dead or comfort the living. Police investigators never roped this place off or collected the evidence of carnage left behind on these slopes. And despite video clips online that show mobs clubbing students to death and cheering as flames leap from corpses, not a single suspect has been convicted.

International rights groups say the lack of justice fuels impunity among Buddhist mobs and paves the way for more violence. It also reflects the reality that despite Myanmar’s bid to reform, power remains concentrated in the hands of an ethnic Burman, Buddhist elite that dominates all branches of government.

“If the rule of law exists at all in Myanmar, it is something only Buddhists can enjoy,” says Thida, whose husband was slain in Meikhtila. Like other survivors, she asked not to be identified by her full name for fear of retribution. “We know there is no such thing as justice for Muslims.”