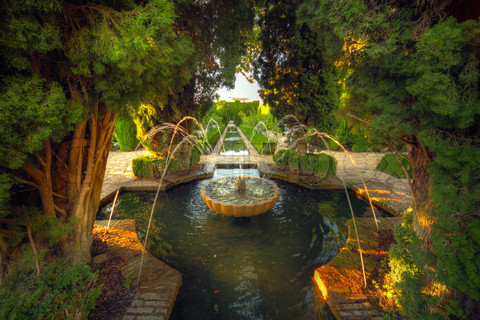 Those who fear Muslim influence should raise a glass to the Sultan of Style next time they freshen up, don the latest fashions or enjoy a delicious three-course meal.

In the wake of the Woolwich machete attack against an off-duty British army drummer, the stabbing in Paris of a French soldier and the Boston marathon attack, anti-Muslim sentiments have, as might be expected, increased in Europe and the United States.

In the U.K., for example, the far-right British National Party (BNP) — which had such a disastrous showing at recent local elections that it has urged it members to “do our bit for Britain and our race” by breeding more — and English Defence League have been mobilizing overtime to capitalize on the fallout.

The BNP leader Nick Griffin called ominously on supporters to “join the British resistance“, while another senior party official suggested that the men behind the London murder should be executed. Meanwhile, anti-Muslim hate crimes are running at 10 times their usual rate, according to a British government hotline.

The United States has also experienced a backlash in what Salon dubbed as the “return of the anti-Muslim bigots“. There have been hate crimes as well as suggestions for blanket spying on Muslims.

On both sides of the Atlantic, there has been growing fear of the “Islamization” of society and the notion that Muslims stand opposed to Western values is gaining traction. This is reflected in a new cross-border survey, which shows that majorities in a number of Western societies regard Islam as a threat.

As I’ve argued before, and despite my concerns over Islamic radicalism and extremism, Islam is not alien to Western civilization but an integral part of it. In fact, Islam and the Muslim influence are deeply woven into the West’s social and civilizational fabric.

Readers may well have come across historical explanations of the contributions Muslims made to modern sciences, philosophy, medicine, agriculture, sociology and other areas of learning. Here, I’d like to explore how Muslims helped make the West “cool,” shaped our modern tastes and sensibilities and gave us many things we regard as quintessentially Western, such as the café.

In fact, I’d like to introduce just one man, Ziryab (Blackbird), the Sultan of Style, who, given his contribution to European chic, should have statues erected to him in Milan, Paris, London and New York. Although you may never have heard of this dandy ninth century Muslim, his genius touches the most private and intimate moments of all our lives — modern etiquette would be positively vulgar without his tasteful influence.

Born Abul Hassan Ali Ibn Nafie in modern-day Iraq in 789 A.D., he joined the court of the legendary Haroun al-Rashid (also of 1,001 Arabian Nights’ fame) where he was the student of a gifted musician. But after stepping too hard on the toes of his mentor, he hot-heeled it to the rising star of Baghdad’s cultural and scientific rival, Cordoba in Andalusia.

There, he joined the court of the Umayyad Prince of Cordoba Abdel-Rahman II. Islamic Cordoba was a beautiful and manicured metropolis of imposing public buildings, although it still lacked its most famous landmark, the 10th century Great Mosque (the Mezquita, as it is known today).

It boasted about 1,000 mosques, 600 public baths, several hundred public schools and a university, not to mention the grand aqueducts in the surrounding countryside that fed the complex irrigation system introduced to the area by the Arabs.

Although he lived a few centuries before the Renaissance, Ziryab was a true “Renaissance man.” In addition to being a polymath with knowledge in astronomy, geography, meteorology and botany, he was also a visionary trendsetter.

As an accomplished singer and musician — he was reputed to have memorized a repertoire of more than 10,000 songs — Ziryab added a fifth string to the Arab oud, creating the lute (which is also etymologically derived from the Arabic al-oud) that would, through the Spanish, spread across Europe.

But one thing above all else constitutes Ziryab’s gravest or greatest legacy, depending on your standpoint, to prosperity. “Fashion is a form of ugliness so intolerable that we have to alter it every six months,” Oscar Wilde, that Ziryab-like Englishman, once retorted. But who, Mr. Wilde, was it that first came up with the revolutionary idea of seasonally shedding our clothes?

Ziryab’s earth-shattering innovation was to submit fashion to the cycle of the seasons. This trendsetter came up with the then outlandish idea that people should wear different styles — and not just more layers or an overcoat — in summer and in winter. He even invented in-between seasons.

This hip Muslim brought a similar orderly flare to food. When people think of haute cuisine, their minds tend to go all Français. French may be the lingua franca of food — with its entrées, appetizers, aperitifs, desserts, etc. — and the French have given us much to savor. However, the modern dining experience was forged in Arabic.

Before Ziryab came along, dining was a freestyle event, even at court. People ate savory with sweet, fruit with meat, all in one big heap. Abundance, and not order, was the key to successful banquets. But our man revolutionized all that.

Perhaps his highly refined sensibilities were offended by what he saw as a feeding frenzy, or maybe he thought that different tastes should be relished individually. Whatever the reason, our gastronome extraordinaire set about to tame his peers’ eating habits by inventing the multi-course meal. To make the fine dining experience that much more exquisite, Ziryab also invented the drinking glass (fashioned out of glass and crystal).

And, to round off the complete fashion experience, this all-round man also found time to develop a new type of deodorant and invented an early form of toothpaste which became all the rage in Iberia, as well as a type of shampoo. In addition to introducing new hairstyles to the longhaired Cordobans, he also popularized shaving — perhaps foreseeing the bad press beards would get in the 21st century.

Next time you brush your teeth, don the latest fashions, enjoy a delicious three-course meal or raise a glass, don’t forget to toast, or at least spare a thought for, old Ziryab, that uncrowned Sultan of Style — and remember that Muslims have had a cool, and not just a chilling, influence on Western society.