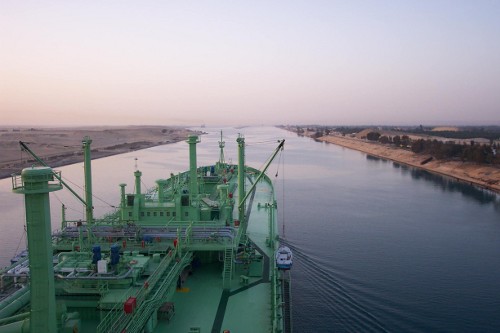 LONDON — Growing turmoil in Egypt is threatening to disrupt shipments through the Suez Canal and increase the costs for shipping lines as Cairo’s cash-strapped government seeks ways of bringing in revenue.

Egypt’s economy has been in crisis since the 2011 overthrow of Hosni Mubarak. The government of Islamist President Mohamed Morsi is grappling with a slump in tourism and falling foreign currency reserves as it seeks to obtain a loan from the International Monetary Fund.

“The government will try to generate some income in the short term through various creative surcharges – including, most likely, on transit fees through the Suez Canal. These measures will be counterproductive over the intermediate and long term,” said J. Peter Pham of U.S. think tank The Atlantic Council.

Rising costs will also hurt the shipping industry – now in the fifth year of one of the worst slumps on record – which relies on the 192-km (120-mile) waterway as the quickest route between Asia and Europe.

In May the Suez Canal Authority (SCA) raised tolls on the canal by two to five percent, following an increase of three percent in March 2012.

A spokesman for the authority said talk of another rate hike this year “will not happen”.

He added, “The system to announce tolls happens in the beginning of the year, so maybe in January there will be a decision to either raise, stabilize, or lower prices according to the global economy and other considerations.”

Tolls brought in around $5 billion annually in recent years, but revenues are falling due to reduced trade between Asia and Europe and a shift to bigger ships to save costs, resulting in less traffic.

“The rate hike earlier this year is simply not going to make up for overall revenue losses,” said Michael Frodl of U.S.-based consultancy C-Level Maritime Risks. “We think another rate rise is likely before the end of the year and could be applied almost immediately.”

A standard container ship bringing consumer goods pays tolls of around $1.2 million for a return trip through the canal, or around a quarter of the overall costs of a voyage between Asia and Europe, according to analysts’ estimates.

Shipping industry sources say Cairo may turn to other charges to raise revenues.

A maritime security source active in Egypt said indirect surcharges were likely to be introduced, such as stepping up ship inspections for seaworthiness and checks on ships’ security teams and weapons carried on board.

The Suez Canal Authority has said it may offer discounts or rebates to increase traffic through the canal. The security source said, however, “It is unlikely they will be able to act on it given the growing political and bureaucratic chaos internally.”

Cities around Suez have already been flash points for violence this year, causing minor stoppages through the canal. Shipping sources say some vessels calling at Port Said also have experienced robberies in recent months.

Morsi faces nationwide protests on Sunday, the first anniversary of his inauguration, with opponents urging him to step down. Days of brawling between his supporters and the opposition have already left several people dead.

Egypt’s military has said it will reinforce security around the canal ahead of Sunday’s demonstrations.

“The Suez Canal is a main lifeline for us,” army spokesman Colonel Ahmed Ali said. “Protecting it is a responsibility for us toward the Egyptian people and toward the world.”

Klaus Holm Laursen of the Suez Canal Container Terminal said it planned to minimize any potential impact on customers.

Several shipping sources have said that if unrest escalates they may consider re-routing around the Cape of Good Hope.

“The smaller hassles and minor disruptions may also create unhappy costumers, and if [they are] not handled by the Suez Canal Authority, some owners may opt for avoidance of the canal,” Peter Sand, chief shipping analyst with trade association BIMCO, said.

“We can hope that the opponents of President Morsi understand the long-term economic implications of disrupting Suez Canal traffic. However, sometimes the logic of an uprising is not entirely fact-driven.”