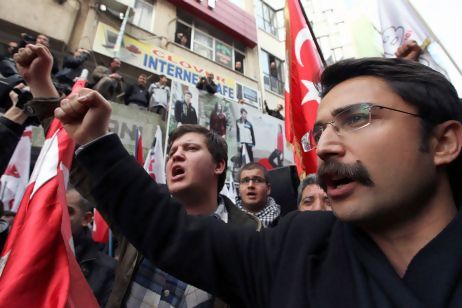 KAHRAMANMARAS, TURKEY // For Mustafa Tuten, Nato soldiers scheduled to arrive here this week to shield the region against potential Syrian missile attacks are not welcome protectors but unwanted foreign occupiers.

“As Muslim Turks, we are against foreign soldiers,” Mr Tuten, president of the local chapter of the religious Felicity Party in this south-eastern Anatolian city, said last week, as he met voters at the party headquarters.

He said foreign troops should keep a low profile in Kahramanmaras to avoid a hostile reaction.

The arrival of Nato troops in Turkey has triggered protests by leftist and Islamist troops. Some of the criticism is fuelled by mistrust of the West in general and the US in particular, and some by memories of foreign intervention in Turkey after the First World War.

Several weeks ago, the Felicity Party was among the organisers of a small protest against the deployment of Nato troops in Kahramanmaras. Protesters burnt US, Nato and Israeli flags, which accurately reflects residents’ feelings about the foreign deployment, according to Mr Tuten.

Today about 400 German soldiers with two batteries of Patriot missile defence systems are to complete their deployment to a Turkish barracks complex overlooking Kahramanmaras from the flanks of a mountain range facing the Syrian border, about 100 kilometres to the south. The Patriots can destroy incoming missiles at a distance of about 70km.

Col Marc Ellermann, the commander of the German unit who has been preparing for the arrival of his troops with an advance team, said the mission’s aim was “deterrence that may help to defuse tensions a little”.

The Turkish government requested Nato’s assistance last November after Syrian artillery shells landed on Turkish territory and killed five civilians, which raised fears that the fighting between Bashar Al Assad’s army and rebels could spill over into its territory.

The German contingent is part of Nato’s response to its member’s request. While the Germans set up in Kahramanmaras, US Patriots are being sent to the border province of Gaziantep, and a Dutch Patriot unit is being deployed in Adana, west of the Syrian border. A total of about 1,200 Nato soldiers will be on duty in Turkey.

Nato has said the deployment of the Patriots was a clear sign that it stood by Turkey.

But many people in Kahramanmaras express scepticism about the mission.

“If they put their missiles here, that means we will be the first place that will be attacked, doesn’t it?” said Alaattin Namli, a shop owner.

Anti-American sentiment also plays a role. Cuma Tahiroglu, a parliamentary candidate for the Felicity Party in Kahramanmaras, said the German soldiers “will turn into Americans in our eyes” should they misbehave by flaunting their weapons around the city.

Elsewhere in the region, members of the Union of Turkish Youths, a nationalist group that has staged protest marches against the Patriot deployment, said they had ordered several thousand sacks and would try to put one over the head of every US soldier they met.

The planned action is a reference to an incident when US soldiers arrested Turkish troops in Iraq after the invasion of 2003 and put sacks over their heads, a treatment deemed deeply insulting by many Turks.

Yesterday, several hundred people joined protest marches against Nato in the port city of Iskenderun, where the German and Dutch Patriot missiles arrived by ship on Monday, and outside the Incirlik air base near Adana, where the US Patriots are awaiting their deployment in Gaziantep. Police broke up the demonstrations with pepper spray, tear gas and batons, Turkish newspapers reported.

In Kahramanmaras, some residents said they suspected Nato’s real aim was to provide protection for Israel against a potential strike from Iran.

“Is there a war of Syria against Turkey? No, there isn’t,” said Malik Ecder Kirecci, who runs a corner shop close to the barracks where the Germans are housed. “These missiles are for Israel and against Iran.”

Such views are a sign of a general unease expressed by many in the city. Although several residents said the German soldiers would be treated with hospitality, others have longer memories.

“It’s because of the Germans that we lost the war,” said Mr Tuten of the Felicity Party, referring to a Turkish-German alliance in the First World War that ended with the break-up of the Ottoman Empire.

After the war, Maras, as the city was called then, was occupied by French troops. The Turks pushed the occupiers out in 1920, a campaign that earned the city the honorific title Kahraman, or “heroic”.

“If the Germans don’t behave themselves and show their weapons around town, they will be treated like the French,” Mr Tuten said with a smile. His party opposed violence, he said, “but if there are any clashes, the responsibility will not be ours”.

Authorities in Kahramanmaras are trying to keep the Nato soldiers out of the public eye as much as possible. Officials said they were working on plans for the best way to get the German unit with its 300 vehicles from Iskenderun to Kahramanmaras, about 200km by road, with minimal disruption.

Ali Ozen, a saddle maker in the bazaar, said he had nothing against the Germans “as long as they keep away from our women”.