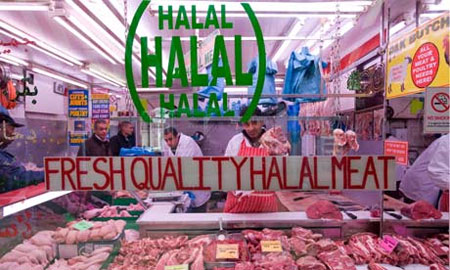 Many of us may be facing the question, “Should I eat halal or organic meats, or be a vegetarian?”

It may be easier to be a vegetarian than to even face this question, because it is a complicated issue that involves several aspects.

The strictest authorities say that a Muslim should eat only halal (lawful) meat that has been slaughtered by Muslims in the correct manner (zabiha). On the other hand, the Prophet (SAW) is reported to have stated, “The food of the people of the Book has to be from among the Tayyabat for a Muslim to eat it (Maududi),” and “If one does not hear from a Christian or a Jew that a name other than Allah’s, such as that of Jesus or a saint, was mentioned at the time of slaughter, the meat he offers is halal (Al-Qaradawi).”

However, the answer to this question is not really so clear cut. There are three issues that should be considered in this contemplation: how an animal is raised, the process of slaughtering the animal, and who performs the slaughtering.

Much meat labeled “halal (zabiha)” may not even be halal because of the manner in which the animals were raised. As Muslims, we are taught to treat animals kindly, but most non-organic meat comes from large “factory-style” farms that raise animals in cramped conditions and inject them with antibiotics and hormones.

In Islam, we are also taught that we must not eat diseased animals. We mistakenly trust the FDA and Muslim butchers to monitor the quality of the meat made available to us. However, in the face of mass production, diseased meat often hits the market. Evidence of this is found in the numerous recalls of meat that we hear of in the news, and in the findings of animal rights group such as, in a recent report, that up to 60% of all factory-raised animals are in ill health, despite the antibiotics they are given. The safest meat available to us is either from animals raised and slaughtered on a small farm or according to organic standards.

After the consideration of how animals are raised comes that of what they have been fed. In Islam, if an animal has consumed blood while it was living, it is haram for us as food. It is a standard practice of the meat industry to supplement the diets of animals being raised for consumption with ground-up bones and animal parts. Halal animals would only be fed vegetation and grains.

Admittedly, it is hard to find meat that fulfills all of the above requirements. It is also difficult to find organic meat that has been properly slaughtered. On large farms, it is a standard practice to electrocute the animals, and then drain the blood. This method affects the central nervous system of the animal, and interferes with the drainage of blood. It is clearly stated in the Qur’an that Muslims should not consume blood, so we should make sure that any organic meat we buy has been slaughtered on a small scale by hand.

When we consider who does the slaughtering, we should keep in mind that some “halal” farms have been known to employ non-Muslims to do their slaughtering.

We might ask, “Why all of this concern about meat anyway?” It has been proven that the meat we eat has a definite effect on our bodies. For example, the female hormone estrogen, fed to animals to make them grow faster and fatter, is being digested by us when we eat non-organic meats.

This has been linked to early development in females (with puberty occurring as early as 7 years instead of at 12 years), and a reduction of masculinity in the appearance of boys and men. We worry that our girls seem to be growing up too fast, and that our boys are becoming interested in alternative lifestyles. It stands to reason that consuming hormone-injected meats and milk products could cause hormonal imbalances in humans.

In conclusion, we can only be assured of having truly halal meat if we, or a trusted friend, raise and slaughter the meat ourselves. Since few of us are able to do this, the next best thing to do is to make the most informed choice that we can about what we eat. We can start by reducing our consumption of meat. The Prophet (SAW) recommended that we do not eat anything in excess. He also recommended that we not go more than thirty days without eating meat, nor should we eat meat for thirty days in a row.

Next, we can make an informed decision about where we will purchase our meat. Do we want our families to consume electrocuted meat, blood and hormones – even though it may be labeled “Halal or Zabiha?” Or do we want our families to consume meat that has been raised and slaughtered in a kind manner, and is as pure as possible? It is definitely in our best interests to make the effort to research our meat sources, and to find one that adheres as closely as possible to Islamic guidelines.