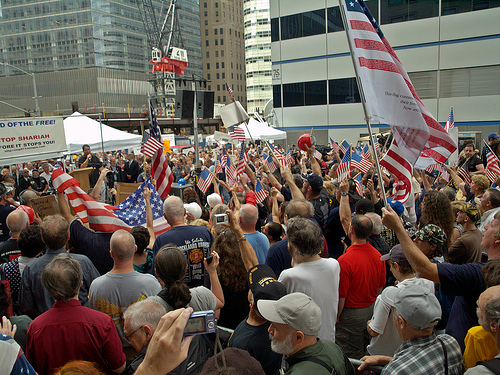 It has been challenging for me – a young Catholic working in interfaith dialogue – to watch the escalation of conflict between Muslim communities the world over and the United States. Observing this escalation as an American citizen has been equally difficult because religious tolerance is at the heart of my definition of American identity. For this reason I want to discuss the values of the Founding Fathers and their faith that America would always be a place that is open to people from all faiths.

Americans and Muslims worldwide shouldn’t be surprised when they see that the writings of America’s Founding Fathers reveal an open perspective and absolute acceptance of Islam and, indeed, all religions. “The bosom of America,” wrote George Washington in 1783, is “open to receive . . . the oppressed and persecuted of all nations and religions, whom we shall welcome to a participation of all our rights and privileges . . . They may be Mahometans [Muslims], Jews, or Christians of any sect, or they may be atheists.”

John Adams, who served as vice president under George Washington, called the Prophet Muhammad one of the world’s “sober inquirers of truth”. Echoing Washington, he stated in 1797 that the US government “has in itself no character or enmity against the laws, religion, or tranquillity of [Muslims].” Benjamin Franklin helped fund the construction of a religious temple in Philadelphia that would be open to all faiths, “so that even if the Mufti of Constantinople were to send a missionary to preach [Islam] to us, he would find a pulpit at his service.”

In a document on religious freedom that was written for the Virginian colonial legislature in 1777, Thomas Jefferson stated that “the Jew, the Gentile, the Christian, and the [Muslim], the Hindoo [Hindu], and infidel of every denomination” are welcome. Today a statue of Jefferson stands at the University of Virginia. He is holding a tablet that reads, “Religious Freedom, 1786”, below which is inscribed Allah, alongside God, Jehovah and Brahma.

It is in the egalitarian spirit of the Founding Fathers that Akbar Ahmed, former Pakistani ambassador to the UK and current Ibn Khaldun Chair of Islamic Studies at American University, and several of his young American students travelled across the United States to explore American identity through the eyes of Muslims. Arising out of their travels was the documentary feature film Journey into America, which follows the team to over 75 cities, 100 mosques, and into the homes, schools and places of worship of Americans of all backgrounds. The film portrays how many Muslim Americans have restored the faith of the Founding Fathers, but it also goes beyond this to document how some Americans have lost sight of fundamental components of American identity such as tolerance, compassion and openness.

In my opinion, the pluralist vision of the Founding Fathers is the quintessential value which makes American identity unique among the national identities of the world. To restore their vision of America as a place where all people – regardless of religious background – can coexist, I established the initiative One Film 9/11.

The goal of this project is to screen Journey into America in as many places of religious worship around the United States and the Muslim world on 11 September, 2013 in the hope of demonstrating how one film can ultimately have a positive impact on relations between Muslims and non-Muslims worldwide.

For Americans and Muslims to go forward in a mutually beneficial direction, both sides must dedicate themselves to the principles expressed by the Founding Fathers. One Film 9/11 is an important step in restoring this faith and building bridges in a world desperately in need of them.