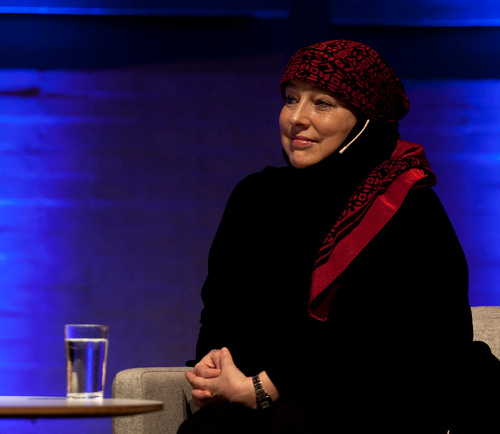 Yvonne Ridley converted after being a prisoner of the Taliban.

We live in an age of deep life crisis today.  Go east or west, go north or south, people are looking for a meaning to their lives. Those with great accomplishments and wealth bemoan their spiritual voids. Others suffering because of economic misery are questioning the status quo – the utility of capitalism, the state and all that that has brought this world to this point today.

Women, in particular, are leading a change – albeit quietly. Disgusted with the notion of empowerment, they are looking for alternatives for real happiness and contentment. Today’s moms – the feminists of the 80s and 90s era – want to hold their children accountable for “irresponsible actions.” They are questioning the inability of classical feminism in changing the fundamentals of the gender biology, the family structure, the work place and the gender roles.

This new wave of intellectual and spiritual curiosity is making thinking religionists debate the utility of religions in their day to day problems – jobs, debts, depression, discontentment, morality and so on. Unsurprisingly, all this is drawing an ever increasing number of people, particularly women, towards Islam.

In this backdrop the disgusting shooting of Pakistani teenager Malala Yousufzai raises questions. Do actions like these do any good to the image of Muslims and help those women and men seeking answers in Islam or do they just repel?

A CNN report says that 1.5 million Americans embraced Islam since 9/11, about 50 % of them women. In 2011 UK-based Faith Matters revealed, in a new report, that up to 100,000 converts to Islam were living in the UK, with white women leading the trend. A survey of 122 converts showed 56% were white British, 62% of them being women. In Europe the numbers are in tens of thousands.

Symbolising this change are women like Tony Blair’s sister-in-law, Lauren Booth, who embraced Islam in 2010. A journalist, Lauren in her famous article, “I’m now a Muslim. Why all the shock and horror?” in The Guardian on 3 Nov 2010, wrote “Of course, we cannot discount the appalling way women are mistreated by men in many cities and cultures, both with and without an Islamic population. Women who are being abused by male relatives are being abused by men, not God.”

Camilla Leyland, 32, from Cornwall says she converted to Islam for ‘intellectual and feminist reasons’ believes that ‘the teachings of the Koran give equality to women’.

A former MTV host, Kristiane Backer, after becoming Muslim explains her liberation like this: “I met a lot of famous, interesting people in life, but ultimately it was an empty life, so now I am from ‘Empty-V’, from entertainment to ‘inner-tainment.’

The ‘anything goes’ permissive society that I coveted had proved to be a superficial void, says Kristiane, who has authored From MTV To Mecca, and believes the new breed of modern, independent Muslims can band together to show the world that Islam is not the faith I grew up in — one that stamps on the rights of women.

Earlier this year young Philippines actress Queenie Padilla quit showbiz and converted to Islam, calling it her most liberating experience. She is joined by the likes of the former Miss South African – Lynn Massyn – who declared Islam to be her new way of life in front of over 10000 people at the Islamic University of Gaza last year.

Meanwhile, we can’t just ignore South Africa’s 22-year-old fast bowler Wayne Parnell (now Waleed) who observed his first month of fasting this year after “a period of personal study and reflection” embracing Islam. Then the case of the 27-year old Sean Stone, the son of Oscar-winning director Oliver Stone, who converted to Islam in February this year. When asked by a FOX TV anchor about his decision, he called it “as a will of Allah.”

The world was rattled again earlier this year when Hollywood star Liam Neeson (my favourite actor) declared that he was considering becoming a Muslim. The 59-year-old actor was quoted by The Sun this January saying that Islamic prayer ‘got into his spirit’ while filming in Turkey. “I was reared a Catholic, but I think every day we ask ourselves, not consciously, what are we doing on this planet? What’s it all about?”

The big mistake people make is by confusing culture with religion. Yes, there are Muslim cultures which do not allow women individual freedom, yet when I was growing up, I felt more oppressed by Western society, Camela Leyland was quoted in Daily Mail in October 2010. That is what, perhaps, explains Malala’s case.