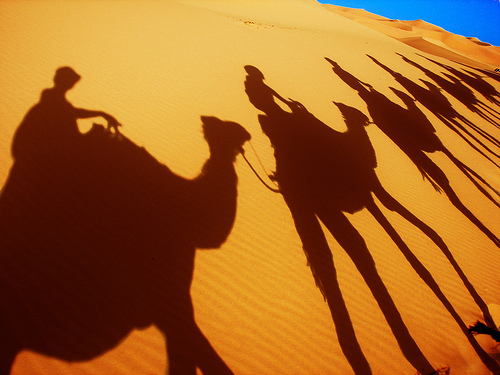 (May the peace and blessings of Allah be upon him.)

At Bosra, near one of the halts where the Meccan (trading) caravan always stopped, there was a cell which had been lived in by a Christian monk for generation after generation. When one died, another took his place and inherited all that was in the cell including some old manuscripts.

Amongst these was one which contained the prediction of the coming of a Prophet to the Arabs; and Bahira, the monk who now lived in the cell, was well versed in the contents of this book, which interested him all the more because, like others, he too felt that the coming of the prophet would be in his lifetime.

He had often seen the Meccan caravan approach and halt not far from his cell, but as this one came in sight his attention was struck by something the like of which he had never seen before: a small low-hanging cloud moved slowly above their heads so that it was always between the sun and one or two of the travellers. With intense interest he watched them draw near.

But suddenly his interest changed to amazement, for as soon as they halted the cloud ceased to move, remaining stationary over the tree beneath which they took shelter, while the tree itself lowered its branches over them, so that they were doubly in the shade. Bahira knew that such a portent, though unobtrusive, was of high significance. Only some great spiritual presence could explain it, and immediately he thought of the expected Prophet. Could it be that he had at last come, and was amongst these travellers?

The cell had recently been stocked with provisions, and putting together all he had, he sent word to the caravan: “Men of Quraysh, I have prepared food for you, and I would that ye should come to me, everyone of you, young and old, bondman and freeman.” So they came to his cell, but despite what he had said they left Muhammad, who was still very quite young, to look after their camels and their baggage. As they approached, Bahira scanned their faces one by one.

But he could see nothing which corresponded to the description in his book, nor did there seem to be any man amongst them who was adequate to the greatness of the two miracles. Perhaps they had not all come. “Men of Quraysh,” he said, “let none of you stay behind.” “There is not one that hath been left behind,” they answered, “save only a boy, the youngest of us all.” “Treat him not so” said Bahira, “but call him to come, and let him be present with us at this meal.” Abu-Talib and the others reproached themselves for their thoughtlessness. “We are indeed to blame,” said one of them, “that the son of Abdullah should have been left behind and not brought to share this feast with us,” whereupon he went to him and embraced him and brought him to sit with the people.

One glance at the boy’s face was enough to explain the miracles to Bahira; and looking at him attentively throughout the meal he noticed many features of both face and body which corresponded to what was in his book. So when they had finished eating, the monk went to his youngest guest and asked him questions about his way of life and about his sleep, and about his affairs in general.

Muhammad readily informed him of these things for the man was venerable and the questions were courteous and benevolent; nor did he hesitate to draw off his cloak when finally the monk asked if he might see his back. Bahira had already felt certain, but now he was doubly so, for there, between his shoulders, was the very mark he expected to see, the seal of prophethood even as it was described in his book, in the selfsame place. He turned to Abu-Talib:

“What kinship hath this boy with thee?” he said. “He is my son,” said Abu-Talib. “He is not thy son,” said the monk; “it cannot be that this boy’s father is alive.” “He is my brother’s son,” said Abu-Talib. “Then what of his father?” said the monk. “He died,” said the other, “when the boy was still in his mother’s womb.” “That is the truth,” said Bahira. “Take thy brother’s son back to his country, and guard him against the Jews, for by God, if they see him and know of him that which I know, they will contrive evil against him. Great things are in store for this brother’s son of thine.”

When he had finished his trading in Syria, Abu-Talib returned to Mecca with his nephew, who continued his solitary life as before. But his uncles saw to it that he, as also ‘Abbas and Hamzah, had some training in the use of weapons of war. Hamzah was clearly destined to be a man of mighty stature, endowed with great physical strength. He was already a good swordsman and a good wrestler.

Muhammad was of average height and average strength. He had a marked aptitude for archery, and gave every promise of being an excellent bowman, like his great ancestors, Abraham and Ishmael. A powerful asset for this lay in the strength of his eyesight: he was reputed to be able to count no less than twelve of the stars of the constellation of the Pleiades.

In those years Quraysh were not involved in any fighting except for a spasmodic and intermittent conflict which came to be known as the sacrilegious war because it had started in one of the sacred months. A profligate of (the tribe of) Kinanah had treacherously murdered a man of ‘Amir, one of the Hawazin tribes of Najd, and had taken refuge in the impregnable fortress township of Khaybar.

The conflict dragged on for three or four years in which there were only five days of actual fighting. The head of the clan of Hashim was at that time Zubayr, full brother, like Abu-Talib, of Muhammad’s father. Zubayr and Abu-Talib took their nephew with them to one of the first battles, but they said he was too young to fight. He was none the less allowed to help by gathering enemy arrows that had missed their mark and handing them to his uncles so that they could shoot them back.’

But at one of the subsequent battles, where Quraysh and their allies had the worst of the day, he was allowed to show his skill as a bowman and was praised for his valour.’

The war helped to fan the growing discontent which every sedentary community tends to feel with the law of the desert. Most of the leading men of Quraysh had travelled to Syria and had seen for themselves the relative justice which prevailed in the Roman Empire. It was also possible in Abyssinia to have justice without recourse to fighting.

But in Arabia there was no comparable system of law by which a victim of crime, or his family, might obtain redress; and it was natural that the sacrilegious war, like other conflicts before it, should have set many minds thinking of ways and means to prevent the same thing from happening again. But this time the result was more than mere thoughts and words: as far as Quraysh were concerned, there was now a widespread readiness to take action; and their sense of justice was put to the test by a scandalous incident which took place in Mecca in the first few weeks after the end of the fighting.

A merchant from the Yemeni port of Zabid had sold some valuable goods to a notable of the clan of Sahm. Having taken possession of these, the Sahmite refused to pay the promised price. The wronged merchant, as his wronger well knew, was a stranger to Mecca, and had no confederate or patron in all the city to whom he might go for help. But he was not to be overawed by the other man’s insolent self-assurance; and, taking his stand on the slope of Abu Qubays, he appealed to Quraysh as a whole, with loud and vehement eloquence, to see that justice was done. An immediate response came from most of those clans which had no traditional alliance with Sahm.

The Hashim, Muttalib, Zuhrah, Asad and Taym clans were all well represented, and they were joined by Adi… Having decided, after an earnest discussion, that it was imperative to found an order of chivalry for the furtherance of justice and the protection of the weak, they went in a body to the Ka’bah where they poured water over the Black Stone, letting it flow into a receptacle.

Then each man drank of the thus hallowed water; and with their right hands raised above their heads they vowed that henceforth, at every act of oppression in Mecca, they would stand together as one man on the side of the oppressed against the oppressor until justice was done, whether the oppressed were a man of Quraysh or one who had come from abroad. The Sahmite was thereupon compelled to pay his debt, nor did any of those clans which had abstained from the pact offer him their assistance.

Together with the chief of Taym, Zubayr of Hashim was one of the founders of this order, and he brought with him his nephew Muhammad, who took part in the oath and who said in after-years:

“I was present in the house of Abdullah ibn-judan at so excellent a pact that I would not exchange my part in it for a herd of red camels; and if now, in Islam, I were summoned unto it, I would gladly respond.”! Another of those present was their host’s first cousin, Abu Quhafah of Taym, together with his son Abu-Bakr, who was a year or two younger than Muhammad and who was to become his closest friend.

Based on an excerpt from the book Muhammad: His Life Based on the Earliest Sources by Martin Lings.