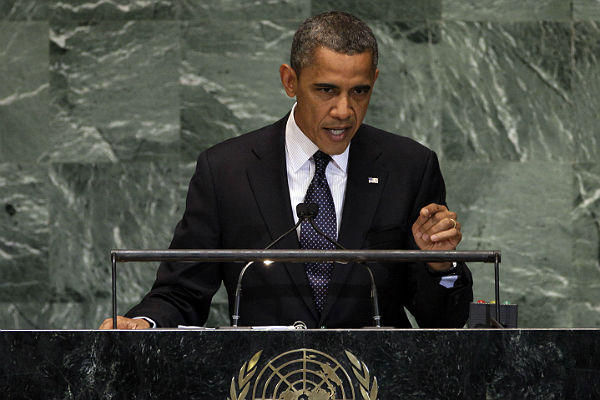 The beautifully crafted speech of the Nobel peace laureate would have been believed – and better received—had it simply been genuine. The president’s appeal for rejecting violence, spreading peace among nations, while emphasizing the vital use of diplomacy in international relations, as well as his call for respecting the rule of law, due process, and cultural understanding were remarkable. But unfortunately, they were simply not credible.
In his speech, the president admonished the Muslim World by underscoring the important belief that people must “resolve their differences peacefully” and that “diplomacy” should take “the place of war.” Laudable words, but only if America practiced what it preaches.

In his seminal work “A Century of U.S. Interventions,” based on the Congressional Records and the Library of Congress’ Congressional Research Services, Zoltan Grossman chronicled 133 U.S. military interventions by the most active military in the history of the world, between 1890 and 2001. Similarly, William Blum’s study “A Guide to the World’s Only Superpower,” covered 67 interventions between 1945 and 2000 that, according to him, resulted in the deaths of 13-17 million people. In his book “The Fall of the U.S. Empire – And Then What?,” European intellectual Johan Galtung listed 161 incidents of American overt political violence between 1945 and 2001, including 67 military interventions, 25 bombings, 35 political assassinations (or attempted ones), 11 foreign countries that were assisted with torture, and 23 interferences with elections or the political process abroad. And all that was before the 9/11 attacks.

Since then, the U.S. military has been extremely busy, invading Iraq in 2003 under false pretenses and causing hundreds of thousands of casualties while creating millions of refugees. Before that, it invaded Afghanistan in 2001, causing tens of thousands of casualties in the longest war in U.S. history while still maintaining to this date over 70,000 soldiers on the ground. The U.S. has also been waging open warfare with the whole world as its theater of operations in the so-called “war on terror.” This endless war allowed the U.S. military to engage in undeclared military operations, violating the sovereignty of many countries in Asia and Africa including Pakistan, Yemen, Somalia, Djibouti, and numerous Sub-Saharan and West African countries. So much for peaceful conflict resolution and mutual respect between nations.

During that period, the Bush administration allowed (and the Obama administration has since refused to prosecute) the CIA to violate the sovereignty of allied countries including in Europe by authorizing the use of prison black sites, rendition, and torture. In one case, Italy tried and convicted in absentia twenty-three CIA operatives who violated its sovereignty when they kidnapped and rendered an Egyptian cleric to be tortured by the former Egyptian regime. Likewise, Germany condemned the U.S. intelligence agency for kidnapping and torturing one of its citizens of Lebanese descent. While Canada regretted and apologized for its role in rendering one of its citizens of Syrian descent, the U.S. – the country that actually carried out the rendition knowing that the subject would be tortured by the Syrian regime that it now enthusiastically condemns- still refuses to acknowledge its role, let alone apologize for the gross violation of its human rights obligations under international treaties.

Moreover, no American senior officials were ever held accountable for the Abu Ghraib prison scandal and torture in Iraq, or for waterboarding and other “harsh interrogation techniques” (read: torture) used against Muslim prisoners (the overwhelming number of whom were innocent bystanders according to legal and human rights organizations) at Guantanamo, Bagram, or elsewhere.

President Obama further stated in his scolding of Muslim world leaders that they needed to emulate the behavior of civilized nations that respect “the rule of law and due process that guarantees the rights of all people.” But such lofty rhetoric from the president might be very difficult to accept since he himself acted as prosecutor, judge, and executioner when he ordered the murder of several American citizens, including a cleric of Yemini descent and a magazine editor of Pakistani descent with a drone attack in Yemen. People across the Muslim world wondered why the rule of law was absent in these cases and why their due process rights did not apply. Even two weeks after their death, the cleric’s sixteen-year old son, also an American citizen with supposedly constitutional protections, and a child by international standards, was also assassinated in a separate drone attack. So much for due process or respect for human rights.

In fact, since Obama became president in 2009, dozens of innocent civilians in Afghanistan, Pakistan, Yemen, Somalia, and else where have been killed each year. But rarely does the civilized nation apologize for killing innocent Muslim civilians because “America does not apologize” as many American politicians repeatedly love to say.

Furthermore, Obama’s commendable call for mutual respect among nations may have fallen on deaf ears because it was considered by many as disingenuous. As noted above, for years the U.S. has disrespected the sovereignty of Pakistan and Yemen as it assassinated many individuals, including U.S. citizens, on their soil without any regard for the national sovereignty of the host countries, which are not at war with the U.S. But Obama could not have dared to use a drone attack in the U.K. to kill a cleric of Egyptian descent, who the U.S. has been after for years. In the U.K., the U.S. simply asked the British to extradite him so that he could be tried on U.S. soil. So the U.K. gets every consideration while the administration only shows contempt for Yemen or Pakistan.

In his speech, the president lauded the “enshrined” American values of constitutional protections and freedom of speech, as he reminded his world audience that “citizens cannot be thrown in jail because of what they believe,” and that they should be allowed to “speak their minds and assemble without fear.” He then emphatically stated that in the U.S. “our Constitution protects the right to practice free speech.”

Yet Muslims around the world wondered where were these protections of freedom of speech when several American Muslims were indicted and sentenced to as much as life in prison in the U.S. for exercising First Amendment activities, including an American Muslim pharmacist of Egyptian descent in Boston who was sentenced to seventeen years in 2012 for translating passages and uploading videos to the internet, and a cable operator of Pakistani descent who was sentenced to almost six years in 2004 for connecting his New York customers to Hezbollah’s satellite channel.

In many of these cases, government prosecutors speculated that the speech of the Muslim defendants was not protected because it could have led to violence even though no evidence was ever presented to support such a theory. Contrast that with the proven record of hate speech spewed by numerous American Islamophobes, many of whom were quoted extensively by anti-Muslim extremist Anders Breivik, who deliberately killed in cold blood 77 people in Norway in July 2011. In his 1500-page manifesto, Breivik cited many American anti-Muslim haters such as Robert Spencer, Daniel Pipes, Pamela Geller, Martin Kramer, and others. They apparently inspired him to commit the atrocious killings, though none were ever held, even morally, accountable, or subsequently condemned for their hateful inciting anti-Muslim speech.

Moreover, President Obama proudly affirmed his belief in “freedom and self-determination” and expounded that such concepts are “not unique to one culture,” since they are “not simply American values or Western values; they are universal values.” But these words ring hollow as the American president failed to explain to peoples around the world why the U.S. and its Western allies while steadfastly declaring that they “believe in these values” have continuously blocked freedom and self-determination, even symbolically at the United Nations, to the Palestinian people who have been suffering for over six decades either under brutal military occupation or in squalid refugee camps.

He further failed to justify why America has continued to fully arm and finance the tools that maintain and sustain the Israeli military occupation for decades, while shielding Israel’s atrocious policies against the unarmed Palestinian civilian population. Or why it protects Israel from any accountability for its illegal settlement activities and occupation in flagrant violations of international law and the Geneva conventions.

Towards the end of the speech, President Obama accused the Iranian government of supporting “terrorist groups” in the Middle East (none of which is known to have targeted the U.S.), while his administration has just delisted the Iranian terrorist group MEK, which has a bloody history and in recent years has been responsible for many terrorist attacks and assassinations inside Iran including the targeting of government officials, scientists, and academics.

Overlooking the fact that he started his speech by emphasizing peace and diplomacy, the president ended it by implicitly threatening Iran with war unless it accepts the dictates of the West as he stated that “the United States will do what we must to prevent Iran from obtaining a nuclear weapon” since “it has failed to take the opportunity to demonstrate that its nuclear program is peaceful.”

Most Americans might simply be deceived by Israeli propaganda in regard to the Iranian nuclear program, but most of the citizens of the world are not oblivious to the facts or the double standard applied to this issue by the American administration and its Israeli ally. So here are the facts that the president is fully aware of but conveniently decided to totally ignore.

Israel is the only country in the Middle East that actually possesses nuclear weapons- over 300 nuclear warheads along with their delivery systems. Israel is not a signatory to the Non-Proliferation Treaty (NPT), while Iran is. Under the NPT, Iran not only has the right to have a robust civilian nuclear program, but the five recognized nuclear power countries have the obligation to help Iran develop one.

Moreover, Iran’s nuclear facilities have been fully and are currently under the IAEA inspection regime. Iran has repeatedly disavowed the use of nuclear arms and has only enriched its uranium stockpile to the civilian use level of twenty percent- not the ninety eight percent needed for weaponization. Moreover, since at least 2007 the consensus of the sixteen U.S. intelligence agencies has been that Iran abandoned any steps towards building a nuclear arms program. Finally, it was Iran that accepted the conditions set by President Obama in 2010 in his communication with the president of Brazil and prime minister of Turkey for Iran to prove its civilian use intentions. But it was Obama who subsequently backed away from the diplomatic solution as soon as Iran agreed to it, the same plan that he himself outlined to the world leaders.

When Obama arrived on the world stage in 2009, people the world over including many in the Muslim World had high hopes for real and genuine change. People were ready to turn the page on the painful years of the arrogant behavior of George W. Bush. But apparently the empire’s inertia overpowers the raised hopes of any false prophets.

The views expressed in this piece are the author’s and do not necessarily reflect those of MuslimVillage.com.