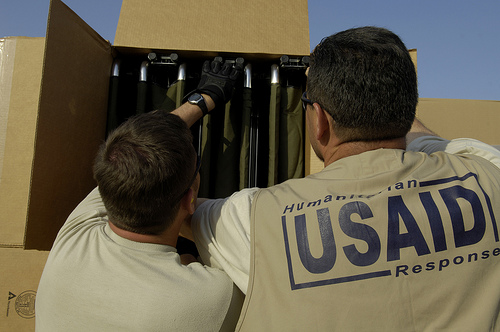 WASHINGTON — The U.S. Agency for International Development (USAID) will end its activities in Russia following a decision by Moscow, according to U.S. officials.

In a statement issued on September 18, U.S. State Department spokeswoman Victoria Nuland confirmed Washington had received the Russian government’s decision to end the mandate of the agency, which supports development and governance programs around the world.

“While USAID’s physical presence in Russia will come to an end, we remain committed to supporting democracy, human rights, and the development of a more robust civil society in Russia,” Nuland said.

“The Russian government’s decision to end all USAID activities in the country is an insult to the United States and a finger in the eye of the Obama administration,” Senator John McCain, an Arizona Republican, said in a statement.

Some opponents of that law, including Russian advocacy groups that receive foreign grants such as For Human Rights, responded by refusing to comply and calling for a “civil disobedience” campaign.

USAID says it has provided “more than $2.6 billion toward Russia’s social and economic development” since 1992.

Russia, for its part, says that it is expelling USAID from the country following attempts by the mission to influence Russian politics and elections.

On September 19, the Russian Foreign Ministry accused USAID of seeking to “influence political processes, including elections of various types, and institutions of civil society through the distribution of grants.”

The ministry said it was also worried by the mission’s work in the volatile North Caucasus, where Moscow is fighting an Islamist insurgency.

In separate comments, Foreign Ministry spokesman Aleksandr Lukashevich said Russia’s civil society was “quite mature” and did not require “outside leadership.”

She said independent election monitoring is “guaranteed by Russian law” and will continue.

However, Lilia Shibanova, head of the independent monitoring group Golos, which receives funding from USAID, said her organization’s projects are “threatened” by USAID’s withdrawal.

Shibanova said she believes Moscow’s decision not to renew USAID’s mandate is partly connected with the Kremlin’s desire to control election monitoring.

Lev Ponomarev, head of the For Human Rights group, also said the decision to close USAID was decreed because the Kremlin “doesn’t want Golos to have the support needed to work effectively.”