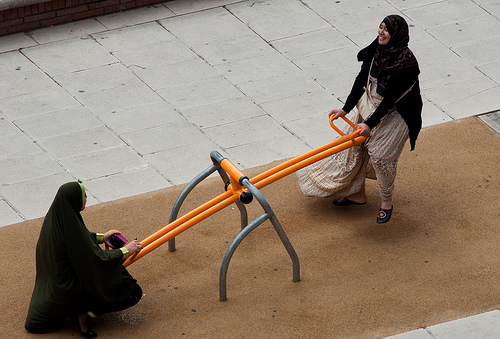 Barcelona: In a country that was once home to the Islamic civilisation for nearly 800 hundred years, that chapter in history is gradually reopening as the influx of Muslim immigrants are reintroducing an Islamic presence in northern Spain.

Barcelona, a city popularly known for the architectural works of Antonio Gaudi, Las Ramblas and for having one of the most famous football clubs in the world, is also popular among Muslim residents but for other reasons – mainly for having one of the largest Muslim population in the country.

Although an Islamic presence in Catalonia lasted for approximately three centuries – as the heartland of Muslim rule was in southern Spain from 711 to 1492 – there still remains some traces of Islamic Moorish architecture in Barcelona’s oldest church of Sant Pau del Camp, which is more than 1,000 years old.

The population in Spain is estimated at 47 million with Barcelona being the second largest city with 1.6 million residents after Madrid with three million inhabitants. According to the Statistics Department at Barcelona´s Town Council, there are 500,000 Muslims in the city while the rest of Muslim residents are scattered around the country, reaching 1.5 million in total.

The capital of the autonomous community of Catalonia is home to 11 mosques and 30 official Islamic entities and religious organizations are registered with the Justice Ministry of Spain and the Office of Religious Affairs of the Barcelona Town Council.

One of the most visited Islamic centres is the Catalan Islamic Cultural Centre (Centre Cultural Islamic Catala), located in the same area as Les Glories shopping centre along the street called Carrer del Clot.

Salim Benarama, 33, from Algeria, who is the imam as well as the director of the Islamic cultural centre, pointed out that although there are nearly a dozen mosques in the city they are all found in apartments and garages at a space less than 50 square metres. Benarama, who has been living in Barcelona for 13 years, explained that it is difficult to find a place of worship big enough to accommodate the growing demand of worshippers. ¨There are half a million Muslims in Barcelona and in this year alone, there were 170 Spanish reverts,¨ he said, as we walked into the three-storey Islamic centre, which is a non governmental organization built almost five years ago.

As we entered through the solid wooden doors engraved with Islamic art, Benarama pointed skywards at the ceiling that was adorned with a passage from Surrah Al Hujurat [49:13], which also happens to be the centre´s slogan: “Oh Mankind, indeed we have created you from a male and a female, and made you into tribes and nations so that you may know each other.”

We then made our way downstairs to the centre´s mosque that is currently under construction, with the assistance of 115 volunteers who work on it all year round. The mosque, which is 1,000 square metres and equipped with a separate entrance, can accommodate up to 1,300 worshippers and is being built in an Andalusian style that can be typically found in the cities of Granada and Cordoba.

¨Since the mosque is not completed yet, we hold our Friday prayers in a designated area on the ground floor and usually receive about 1,000 people. During Ramadan, it overflowed with worshippers and they resorted to praying outside on the streets,¨said Benarama.

The cost of the centre, including the purchase of the land, has accumulated to 1.35 million euros but it still needs 70,000 euros to complete the mosque´s construction.

¨There are Islamic Centres funded by Saudi philanthropists but they are only in Madrid, and the southern cities of Malaga, Marbella and Gibraltar. All the others across the country are non-governmental organizations so we have to make do with what we have,¨ he said.

With Eid Al Adha approaching, Benarama explained that they have already made the necessary arrangements with a butcher to slaughter sheep.

¨To have the residency permit in Spain, we have to respect the laws of the country that clearly state that it is prohibited to make the sacrifice in our homes. But there is an exception, so if you have a chalet outside your home then it is allowed to do it there,¨ he said.

¨The call for prayer is not allowed to be heard in public so we still do it but without a microphone. [Muslims] have been here for eight centuries so we are not strangers to Spain, but the public call for prayer is a sign that the country is Islamic.¨

The Islamic Centre also consists of a cultural centre on the ground floor while classrooms can be found on the first floor. The cultural centre is unfortunately short on books and has a limited library of Islamic books and in cultural history, but plans to have a collection of 15,000 books and also print its own books as they currently purchase them from foreign publishing houses.

¨We have 18 nationalities visiting the centre, who are mostly from African and North African countries, as well as South East Asia. Everyone who wants to visit and learn about the teachings of Islam and on how to pray is welcome,¨ he said.

As we made our way to the first floor, 11 people from different nationalities were attending Quran recital classes. Benarama explained that students are offered classes four hours a week and are first taught the Arabic language before they learn the basic prayers.

Further language classes offered include Catalan, Spanish and French, and students are required to pay 30 euros per month, which all goes towards the construction of the mosque and the centre´s maintenance.

Benarama emphasized that the Catalan Islamic Cultural Centre has two objectives, which includes serving the Islamic community to those who do not speak Arabic and want to learn the language, and secondly it is for the Catalans who want to learn about Islam.

¨The majority of Morrocan children do not speak Arabic and do not know much about their religion because they were born here and have a secular upbringing, as their parents do not have the time to teach them as they are busy at work all day. So our responsibility is to preserve the children´s identities and their moral values, as well as to help with the integration of new Muslim immigrants into Catalan society,¨he said.