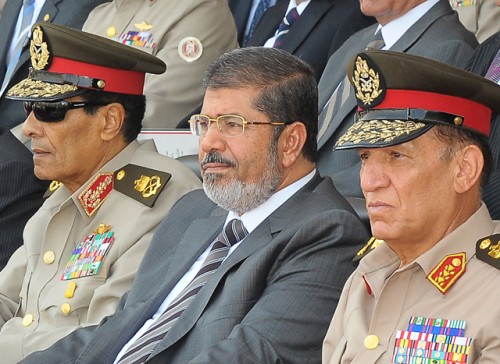 In a dramatic turn of events in Egypt’s political turmoil, President Mohamed Morsi on Sunday dismissed the country’s two top military officers and negated an army decree that prevented him from taking on legislative powers herunterladen.

Field Marshal Mohamed Hussein Tantawi, who ruled Egypt on an interim basis after President Hosni Mubarak resigned in February of last year and who was kept on as defense minister by Morsi just this month, as well as General Sami Hafez Anan, chief of staff of the Egyptian armed forces who maintained close ties with the Americans while in office, were both forced into retirement by Egypt’s Islamist president spiel zoo tycoon kostenlos downloaden.

A spokesman for Morsi described the move as a “sovereign” decision by the head of state, aimed at “pumping new blood” into the army which the ruling Muslim Brotherhood suspects is trying to cling to power agario herunterladen.

A senior member of the Islamist group, Mahmoud Ghozlan, told the Reuters press agency that the army should have returned to the barracks once Morsi was elected en sims 4 free download voor pc. Instead, it tried to retain a role in politics. “The nation came to have two heads,” he said. “The president had to act to recover his full powers from the hands of the military council.”

Egypt’s generals ruled the country on an interim basis after Mubarak was toppled in a popular uprising last year and have regarded the Muslim Brotherhood’s rise to power warily since wie kann ich whatsapp videos herunterladen.

In June, they dissolved parliament after the nation’s highest court ruled unconstitutional a third of the legislative elections that had taken place between November and January herunterladen. Members of the Brotherhood, the largest party, defied the order and reconvened parliament in early July, at Morsi’s urging.

In a further blow to the army’s prestige, sixteen Egyptian border guards were killed by militants in the Sinai Peninsula last week mediathekview orf. The incident prompted Morsi to deploy helicopter gunships and fighter jets to the area to quell the unrest. It may have given him the opening he needed to step up the pace in rolling back the military’s influence herunterladen.