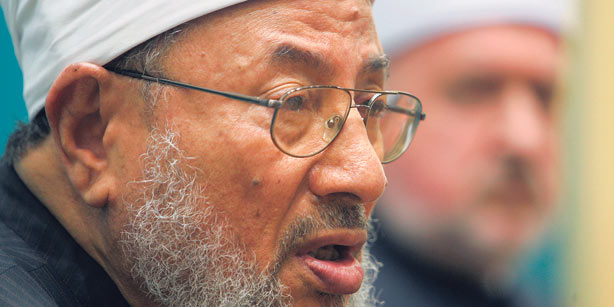 Leading Muslim scholars in the Arab world issued a statement on Tuesday calling on members of the Syrian army to disobey the orders of the repressive Assad regime and to desert.

The statement said President Bashar al-Assad’s rule in Syria is no longer acceptable.

The scholars deplored the Syrian regime’s bloody crackdown and recommended that both civilians and soldiers in Syria not remain loyal to such an “abusive” government, the Anatolia news agency reported on Wednesday.

Among 107 scholars who signed the memorandum are Dr. Yusuf al-Qaradawi, the head of the International Union of Muslim Scholars, Saudi intellectual Salman al-Ouda and Grand Mufti of Egypt Ali Gomaa.

The scholars’ fatwa advises soldiers and security forces to disobey orders to open fire on Syrians and to then desert. Anyone who leaves, they say, should join the ranks of the Free Syrian Army, established by armed insurgent groups against Assad. They also called on the Free Syrian Army to protect civilians and not seek to take revenge.

The declaration addressed international actors, asking them to support the armed Syrian insurgents against Assad’s rule, to cut diplomatic relations with Syria by closing down their embassies in the country and to send messages of protest to Russia and China, who blocked a UN attempt to get Assad to step down.

The declaration also pointed to the Syrians’ need for humanitarian aid, suggesting that international committees be set up in Turkey, Jordan and Lebanon to that end.

Meanwhile, the Assad government did not lay down its arms despite Assad’s pledge to Russian Foreign Minister Sergei Lavrov on Tuesday to end 11 months of bloodshed in the country, the reports said. In Wednesday’s attacks, at least 117 people were killed across Syria, with 93 of the deaths in Homs, according to the Syrian General Revolutionary Council.

The deaths in Homs on Wednesday also include those of babies. Eighteen babies who were born prematurely died after the incubators they were in stopped working as a result of a blackout the Homs hospital experienced following shelling.