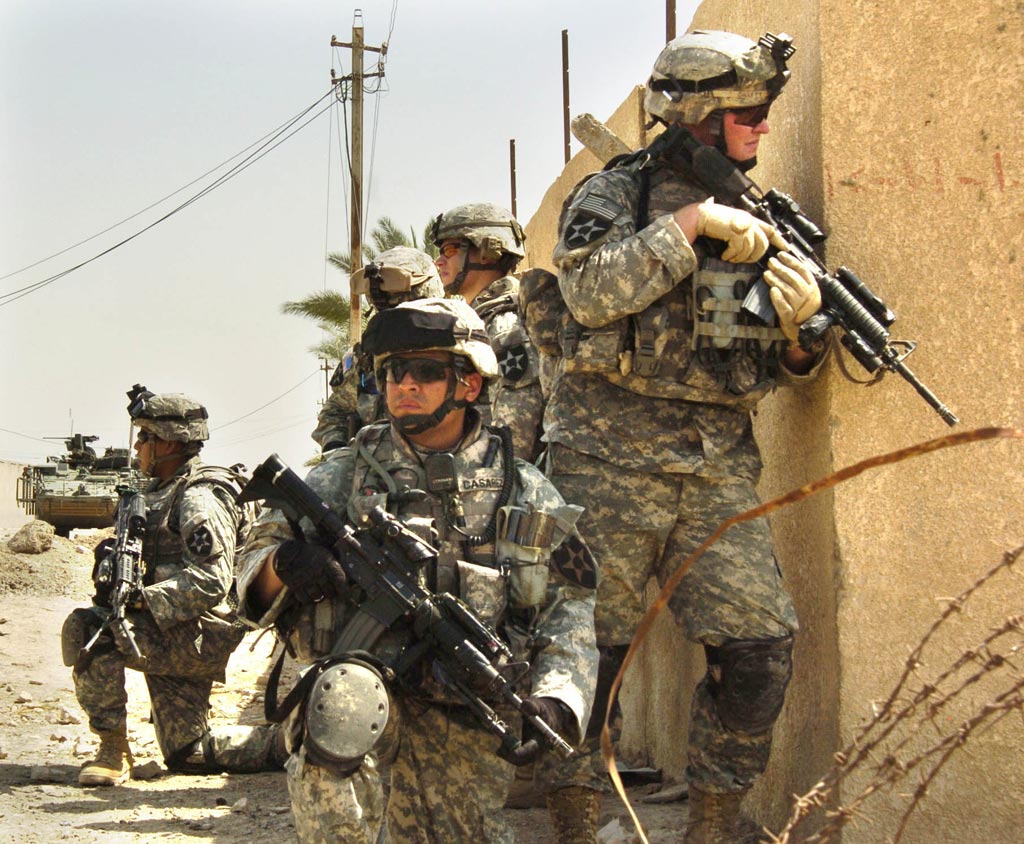 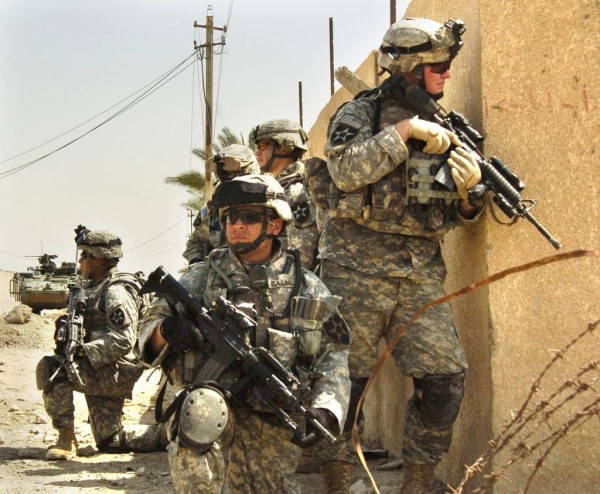 Most people don’t understand what they have been part of here,” said Command Sgt. Major Ron Kelley as he and other American troops prepared to leave Iraq in mid-December. “We have done a great thing as a nation. We freed a people and gave their country back to them.”

“It is pretty exciting,” said another young American soldier in Iraq. “We are going down in the history books, you might say.” (Washington Post, December 18, 2011)

Ah yes, the history books, the multi-volume leather-bound set of “The Greatest Destructions of One Country by Another.” The newest volume can relate, with numerous graphic photos, how the modern, educated, advanced nation of Iraq was reduced to a quasi failed state; how the Americans, beginning in 1991, bombed for 12 years, with one dubious excuse or another; then invaded, then occupied, overthrew the government, tortured without inhibition, killed wantonly, … how the people of that unhappy land lost everything — their homes, their schools, their electricity, their clean water, their environment, their neighborhoods, their mosques, their archaeology, their jobs, their careers, their professionals, their state-run enterprises, their physical health, their mental health, their health care, their welfare state, their women’s rights, their religious tolerance, their safety, their security, their children, their parents, their past, their present, their future, their lives … More than half the population either dead, wounded, traumatized, in prison, internally displaced, or in foreign exile … The air, soil, water, blood, and genes drenched with depleted uranium … the most awful birth defects … unexploded cluster bombs lying anywhere in wait for children to pick them up … a river of blood running alongside the Euphrates and Tigris … through a country that may never be put back together again.

“It is a common refrain among war-weary Iraqis that things were better before the U.S.-led invasion in 2003,” reported theWashington Post on May 5, 2007.

No matter … drum roll, please … Stand tall American GI hero! And don’t even think of ever apologizing or paying any reparations. Iraq is forced by Washington to continue paying reparations to Kuwait for Iraq’s invasion in 1990 (an invasion instigated in no small measure by the United States). And — deep breath here! — Vietnam has been compensating the United States. Since 1997 Hanoi has been paying off about $145 million in debts left by the defeated South Vietnamese government for American food and infrastructure aid. Thus, Hanoi is reimbursing the United States for part of the cost of the war waged against it. (William Blum, Rogue State, p.304) How much will the United States pay the people of Iraq?

On December 14, at the Fort Bragg, North Carolina military base, Barack Obama stood before an audience of soldiers to speak about the Iraq war. It was a moment in which the president of the United States found it within his heart and soul — as well as within his oft-praised (supposed) intellect — to proclaim:

This is an extraordinary achievement, nearly nine years in the making. And today, we remember everything that you did to make it possible. … Years from now, your legacy will endure. In the names of your fallen comrades etched on headstones at Arlington, and the quiet memorials across our country. In the whispered words of admiration as you march in parades, and in the freedom of our children and grandchildren. … So God bless you all, God bless your families, and God bless the United States of America. … You have earned your place in history because you sacrificed so much for people you have never met.

Does Mr. Obama, the Peace Laureate, believe the words that come out of his mouth?

Barack H. Obama believes only in being the President of the United States. It is the only strong belief the man holds.

Items of interest from a journal I’ve kept for 40 years, part VI

Happy New Year. Here’s what to look forward to.

JANUARY 22: Congress passes a law requiring that all persons arrested in anti-war demonstrations be sterilized. House Speaker John Boehner declares it is “God’s will”. House Minority Leader Nancy Pelosi says she supports the law but that she has some reservation because there’s no provision for a right of appeal.

FEBRUARY 18: Oswald Harvey, while in solitary confinement and guarded round the clock by 1200 policemen and the entire 3rd Army Brigade, is killed by man named Ruby Jackson.

MARCH 6: US President Hopey Changey announces new draconian sanctions against Iran, Syria, North Korea, Pakistan, Nicaragua, Venezuela, and Cuba, declaring that they all possess weapons of mass destruction, are an imminent threat to the United States, have close ties to al Qaeda and the Taliban, are aiding Islamic terrorists in Somalia, were involved in 9-11, played a role in the assassination of John F. Kennedy and the attack on Pearl Harbor, do not believe in God or American Exceptionalism, and are all “really bad guys”.

APRIL 3: Revolution breaks out in Bolivia endangering the military junta; 40,000 American marines are sent to La Paz to quell the uprising.

APRIL 8: Dick Cheney announces from his hospital bed that the United States has finally discovered caches of weapons of mass destruction in Iraq — “So all those doubters can now just go ‘F’ themselves.” The former vice-president, however, refuses to provide any details of the find because, he says, to do so might reveal intelligence sources or methods.

MAY 5: The Democratic Party changes its name to the Republican Lite Party, and announces the opening of a joint bank account with the Republicans so that corporate lobbyists need make out only one check. In celebration of the change the new party calls for eliminating the sales tax on yachts.

MAY 11: China claims to have shot down an American spy plane over the center of China. State Department categorically denies the story.

MAY 12: State Department admits that an American plane may have “inadvertently” strayed 2,000 miles into China, but denies that it was a spy plane.

MAY 13: State Department admits that the plane may have been a spy plane but denies that it was piloted by a US government employee.

MAY 14: State Department admits that the pilot was a civilian employee of a Defense Department contractor but denies that China exists.

JUNE 11: Homeland Security announces plan to collect the DNA at birth of every child born in the United States.

JULY 1: The air in Los Angeles reaches so bad a pollution level that the rich begin to hire undocumented workers to breathe for them.

AUGUST 6: The Justice Department announces that six people have been arrested in New York in connection with a plan to bomb the United Nations, the Empire State Building, the Times Square subway station, Madison Square Garden, and Lincoln Center.

AUGUST 7: Charges are dropped against four of “The New York Six” when it is determined that they are FBI agents.

AUGUST 16: At a major demonstration in Washington, the Tea Party demands an end to all government expenditures. They also warn Congress not to touch Social Security or Medicare.

AUGUST 26: Texas executes a 16-year-old girl for having an abortion and a 12-year-old boy for possession of marijuana.

SEPTEMBER 3: The Labor Department announces that Labor Day will become a celebration of America’s gratitude to its corporations, a day dedicated to the memory of J.P. Morgan and Pinkerton strike breakers killed in the line of duty.

SEPTEMBER 12: The draft is reinstated for males and females, ages 16 to 45. Those who are missing a limb or are blind can apply for non-combat roles.

SEPTEMBER 14: Riots breaks out in 24 American cities in protest of the new draft. 200,000 American troops are brought home from Afghanistan, Iraq, and 25 other countries to put down the riots.

SEPTEMBER 28: The Tea Party calls for giving embryos the vote.

OCTOBER 19: Cops the world over form a new association, Policemen’s International Governing Society. PIGS announces that its first goal will be to mount a campaign against the notion that a person is innocent until proven guilty, in those countries where the quaint notion still dwells.

NOVEMBER 8: The turnout for the US presidential election is 9.6%. The voting ballots are all imprinted: “From one person, one vote, to one dollar, one vote.” The winner is “None of the above”.

NOVEMBER 11: US prison population reaches 2.5 million. It is determined that at least 70 percent of the prisoners would not have been incarcerated a century ago, for the acts they committed were then not criminal violations.

DECEMBER 3: Supreme Court rules that police may search anyone if they have reasonable grounds for believing that the person has pockets.

DECEMBER 16: The Occupy Movement sets up a tent on the White House lawn. An hour later a missile fired from a drone leaves but a thin wisp of smoke.