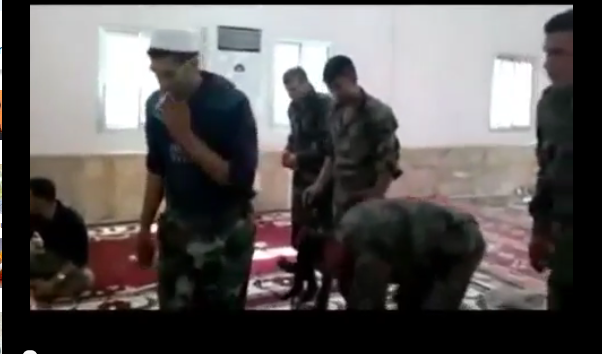 In these images, filmed in the central Syrian city of Al-Rastan, men dressed as soldiers take part in a parody of prayer, ridiculing religion and the protest movement. The sketch is a reminder that the Syrian regime is secular and it presents the protest movement as a terrorist plot led by Islamists.

This undated video was first posted on YouTube in September 2011. One of the men in it smokes a cigarette as he bends over the Koran. The rest of the group then calls for the prayer to start. They line up in a row, as is customary. The man smoking takes on the role of “imam” and leads the prayer, still with a cigarette in his hand. But very quickly, the soldiers mess up the order of the different steps of the prayer and start to parody the texts and the ritual. All of them are laughing. Imitating the way the anti-regime protesters chant, “Lord, free us from Bashar al-Assad”, they chant “Lord, free us from ‘Ar’our!” (0’34). Adnan Al ‘Ar’our is a high-profile imam who is well known for having taken a position against the regime position and who currently lives abroad. He has been interviewed alongside leading opposition figures such as Haythem al-Maleh, a member of the Syrian National Council.

The “imam” in the video continues: “Free us from those who follow Al ‘Ar’our, and from the cursed inhabitants of Al-Rastan, and from all those who come near us”. The others respond to each phrase with “Amen, Amen!” He then takes his phone (at 1 minute 12 seconds) and adds: “And this mobile phone, with which they record videos that they then broadcast on Arab channels to give a bad image of Syria, may God curse it!” They then repeat the word “Takbir” several times, which is a way of inviting others present to respond with “Allahu Akbar” (“God is great” in Arabic). This expression is often used during anti-regime protests, where religious invocations are common.

This second video was clearly filmed in the same place at the same time. It was posted on YouTube during the same week as the first. The men amuse themselves in a similar way but this time they attack the figure of the Prophet. The man playing the “imam” emphasizes the superlatives in a sarcastic tone of voice (“Mohammed is the best of men”, “Mohammed is a man of integrity”). The others respond by subverting the usual forms. At 1 minute and 47 seconds, the “imam” again refers to Al ‘Ar’our: “He is a vile being who comes from the lowest place. He is an insect who interferes in Syrian Arab society in order to contaminate it.”

A secular society is one of the pillars of the Ba’ath Party, which has been in power in Syria since 1963. If the men in the army are indeed soldiers, this would not be the first time that soldiers have parodied religious formulas, preferring to deify the figure of the President or the image of the Party. In 1982, the soldiers serving under Hafez al-Assad (the father of the current president), who had perpetrated the Hama massacres, wrote on the walls of the city: There is no other divinity than the homeland and there is no other Prophet than Ba’ath”. This is a subversion of the Muslim Profession of Faith, according to which there is no “other divinity than God and Mohammed is his prophet”.