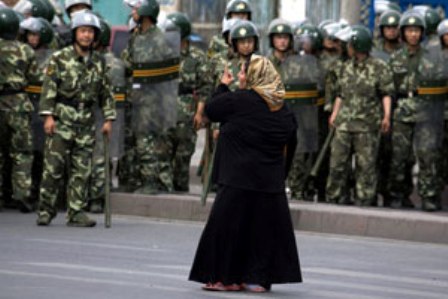 “Two police officers and two villagers got injured and several villagers were taken away by the police, but I don’t know how many,” a police officer surnamed Ma told Agence France-Presse (AFP) on Monday, January 2.

The violence erupted Friday in Hexi, a town in the Ningxia Hui Autonomous Region, after the mosque was declared an “illegal religious place” and about 1,000 officers arrived to demolish it, the Hong Kong-based Information Center for Human Rights and Democracy said.

Hearing the news, hundreds of angry Muslims took to the streets, clashing with police forces who fired tear gas and used knives and batons to beat back ethnic Hui Muslim protesters in Taoshan village, Hexi township.

However, Hexi township police denied any deaths in the clashes.

Police officer Ma said thta the mosque was torn down by police officers despite villagers protests.

The Hong Kong-based rights group said Muslims from Ningxia and the neighboring province of Gansu had donated money to build the mosque.

With a heritage traced back to the Middle East and Central Asia, Hui Muslims are enjoying more religious freedom in the atheist country.

According to official data, China has 20 million Muslims, most of them are concentrated in Xinjiang, Ningxia, Gansu, and Qinghai regions and provinces.

Smaller Muslim communities can also be found throughout interior China.

Unofficially, Muslim groups say the number is even higher, stating that there are from 65-100 million Muslims in China — up to 7.5 percent of the population.