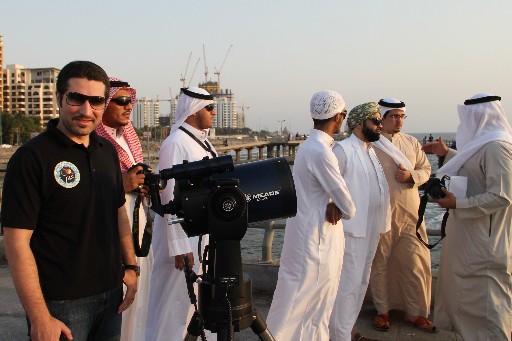 JEDDAH: A number of conservative scholars have threatened to sue Saudi astronomer and scientist Khaled Al-Zaaq for doubting the testimony of citizens who reported to the Hilal panel (moon sighting committee) that the Shawwal crescent was visible on Ramadan 29 (Aug. 29).

After confirming the veracity of the sighting by the people who had reported to the panel, the committee declared the end to the fasting month of Ramadan and signaled the advent of Eid Al-Fitr the next day (Tuesday).

The threats of action came amidst an ongoing debate between Muslim scholars and astronomers about the possibility and probability of sighting the moon on Aug. 29. The astronomers claim the moon could not be sighted on that day as it had eclipsed before sunset.

According to the Islamic calendar, the Arabic months can be either 29 or 30 days long. On many occasions, Eid has been celebrated after only 29 days of fasting.

But this year the debate turned heated after Al-Zaaq was widely quoted by local press and electronic sites that there was no way to sight the crescent on the night of Ramadan 29, thus casting doubts on the testimony of those who claimed to have seen it.

The purists said the astronomer should not have cast doubts on the testimonies of the people who sighted the moon because their antecedents are checked before their word is accepted. Those who call in after sighting the moon are known for their integrity and straightforwardness.

A number of Saudi astronomers had issued press statements claiming that the moon could not be sighted while renowned Islamic scholars defended the testimonies of the people who sighted the moon and said Eid came at the right time.

“There are unjust pens and foul tongues that cast doubt on our religion which should be silenced. We are strictly following the Sunnah of our Prophet in fasting and marking Eid days,” he said, accusing the doubting astronomers of trying to impose their opinions on the nation.

The mufti said the Shariah was clear in the procedures of moon sighting and added that Muslims would never give up the Sunnah for false opinions.

The moon was very clear the next day and was seen in various areas on Tuesday night. This supported the stand of those who said they had sighted the moon on Monday evening.

A number of citizens in the western Al-Ais area said they were able to sight the moon on the night of Monday for half an hour. Their testimony contradicts the claims of the astronomers who said that the moon could not be sighted.