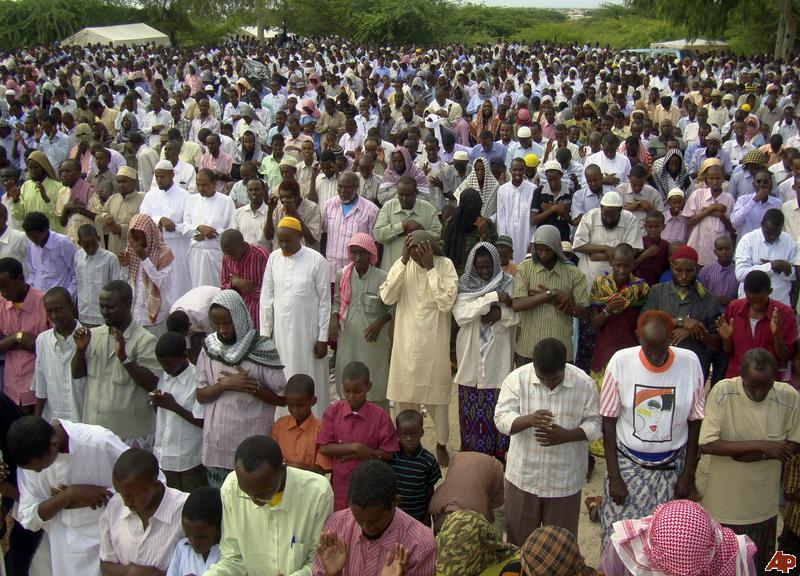 DOLO, Somalia – As Somali mother Quresho Mohmoud Dahir celebrated Eid Al Fitr, she counted her blessings: all her children were alive. They had food. They were safe.

“We will eat very well today,” she said proudly, gesturing at the food rations she’d received on Tuesday morning. Her 12-year-old daughter sat protectively atop the two sacks of corn and the beans her mother was going to prepare.

Ms Dahir is one of hundreds of thousands of Somalis forced to flee their homes by war and famine. She and her six children, the youngest only three years old, walked 12 days to get to this United Nations-run camp on the Ethiopia-Somali border after her husband’s disappearance after some fighting in their area.

Some days they were so hungry they ate leaves from trees. At night, she agonised over lighting a fire; it would protect her children from hyenas but might attract criminals or militias. Finally, sick, starving and exhausted, they stumbled into Dolo, a wind-swept outpost of brushwood buildings scattered among the twisted thorn trees and red sand.

Now the family of seven live in a ragged shelter made of plastic scraps and torn clothing stretched over branches. They depend on donors for everything from cooking pots to sleeping mats to food.

Ms Dahir remembers past years when she used to mark Eid by slaughtering her own goats, having a feast for friends and family and giving charity to her poorer neighbours. But this year, she said, she will cook her donated rations gladly, and give thanks for the kindness of the people that let her family survive a famine that has already claimed tens of thousands of lives.

“Thank Allah that we were welcomed here and given food and we are safe,” she said, squatting in their makeshift shelter. “We are blessed. So many people helped us along the way.”

Many times, her children were so weak she had to leave the younger ones under trees and go begging, she said. There was never much to give – parts of the region they walked through are suffering from the worst drought in 60 years – but impoverished families they passed spared a bottle of milk or a handful of millet, she said. It kept them alive until they reached Dolo three months ago.

She counted the other small improvements since they had arrived. Local families donated two battered pots so she could cook, plus a single torn foam mattress and sleeping mat to share. The Italian government and the UN provided food, vaccinations and malaria medicine. A local charity set up a blackboard under a tree to serve as a school. Most of all, they were safe from the militias that destroyed her life more thoroughly than the drought.

“My husband disappeared during the fighting,” she said. “I don’t know where he is.”

The UN estimates about 3.7 million Somalis currently need aid. Five regions in Somalia are suffering from famine and officials say that will increase in coming weeks.

There is also widespread hunger in Ethiopia, Kenya, and Djibouti. Overall, more than 12 million people need help, according to the UN. The situation is most dire in Somalia, where Al Shabab rebels fighting the weak UN-backed government have barred many aid agencies from their territory.

As Somali families in Dolo prepared their evening meal for Eid – porridge or rice for some, donated scraps of meat for a lucky few – many said the a holiday was especially poignant this year.

Eid is a time for families to gather and feast, and remember the less fortunate in their offerings and prayers. Most of the families here are more used to giving charity than receiving it.

Habiba Osman Ahmed, 26, a former farmer, said: “We used to give some of our harvest to the poor.”

Since then, Somalia’s 20-year civil war pushed the drought into famine. Everything has changed. Now she does not even have a pot to cook in, and must share with another family. She will wait patiently while they finish their food before preparing her own.

Antonio Guterres, the UN High Commissioner for Refugees, said: “Solidarity with people in need is very much a part of today’s celebration. That solidarity should inspire first of all Somalis to allow access to those in need, and should also inspire the international community to be more engaged.”

Freedom for aid agencies to move in and help and lack of funding were the two biggest problems they faced, he said. But on Tuesday those problems were eclipsed by other, more personal pains for many of those in Dolo.

“The last Eid I celebrated with all my children, in my own home,” Ms Ahmed said. Since then, she’s lost two of her four children to the famine; one died in her home village and one on the agonising walk towards help.

“They were gifts from God,” she said as her baby squirmed in her lap. “He gave them to me, and then he took them away.”

Tags: eid fitr 2011 In famine-hit Somalia somalia those who once gave at Eid now have to receive