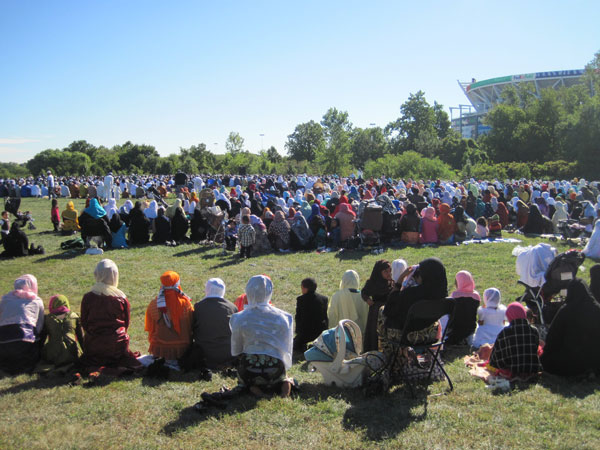 US Muslims praying in a park out stadium

CAIRO – Unlike Muslims worldwide, American Muslims are toning down their celebrations for `Eid al-Fitr, which marks the end of the fasting month of Ramadan, as the occasion falls shortly before the 10th anniversary of the 9/11 attacks.

“We don’t feel it would be right to celebrate on the anniversary of 9/11.”

`Eid Al-Fitr, one of the two main Islamic religious festivals, will start in North America on Tuesday, August 30.

In past years, mosques and Islamic centers used to hold festivals to celebrate `Eid Al-Fitr.

But as the occasion coincides with the 10th anniversary of the 9/11 attacks, US Muslims will tone down their celebration.

Other Muslims were worried of possible attacks against their mosques during `Eid celebrations.

“The anti-Muslim wave we are witnessing is really affecting the Muslim community,” said Naeem Baig, vice president for public affairs at the Islamic Circle of North America.

Since the 9/11 attacks, US Muslims, estimated between 6-8 million, have complained of discrimination and stereotypes in the society because of their Islamic attires or identities.

The anti-Muslim frenzy developed widely over the past months over plans to build a mosque near the 9/11 site, resulting in attacks on Muslims and their property.

Adding insult to injury, Republican Senator Peter King fuelled anti-Muslim sentiments by holding a probe into what he called “radicalization” of American Muslims.

Worse still, lawmakers in at least 15 states have introduced proposals to ban Shari`ah.

Seeking to enhance the image of US Muslims, a Muslim coalition has announced a national day of service for Sept. 11.

“Some fear violence against their Islamic center,” Baig, the ICNA official, said.

“Rather than be afraid, we’re encouraging them to be open and to let people come to their Islamic centers.”

Building bridges in the community, the event would help correct the image of Muslims through a national serve campaign.

“All eyes will be on us this `Eid and on 9/11,” reads promotional material for the event.

“…But can you imagine the power of a headline or TV news story that features American Muslims as citizens, giving back to our country?

“On Sept. 11, let’s show that we can rise above prejudice and hatred and be the kind of conscientious citizens who give back to our country through a national ‘Muslim Serve’ campaign,” the materials continue.

The event is also being promoted by the Council on American-Islamic Relations (CAIR), the Islamic Society of North America, and the Muslim Public Affairs Council among other organizations.