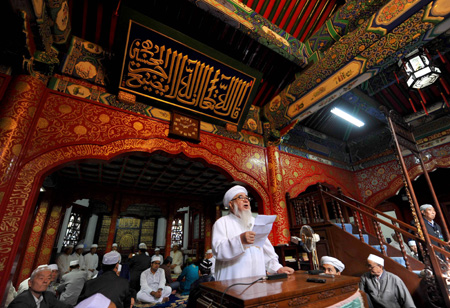 Amid fresh arrests, restrictions on fasting and prayers at mosques, Uighur Muslims are suffering under the latest episode of Chinese government crackdown on their ethnic minority in the northwestern region of Xinjiang.

“If any religious figure discusses Ramadan during the course of religious activities, or encourages people to take part, then they will lose their license to practice,” Dilxat Raxit, spokesman for the Munich-based World Uighur Congress, told Eurasia Review on Friday, August 5.

“The more serious cases will result in arrests for incitement to engage in illegal religious activity,” he said.

A day before the start of the holy fasting month for China’s Muslims, at least 11 people were killed in a series of attacks in the north-western region of Xinjiang.

Chinese authorities blamed the attacks to the ethnic minority, after which the Chinese police shot dead two Muslims last Sunday.

The attacks came less than two weeks after 18 people were killed in an attack in the restive Xinjiang region.

Following the unrest, more than 100 uighurs were detained by Chinese authorities.

Most of those detained as suspects were committed Muslims who attended mosque and whose wives wore veils, residents say.

Xinjiang’s capital, Urumqi, was the scene of deadly violence in July 2009 when the mainly Muslim Uighur minority vented resentment over Chinese restrictions in the region.

In the following days, mobs of angry Han took to the streets looking for revenge in the worst ethnic violence that China had seen in decades.

The unrest left nearly 200 dead and 1,700 injured, according to government figures. But Uighurs, a Turkic-speaking Muslim minority, say the toll was much higher and mainly from their community.

China’s authorities have convicted about 200 people, mostly Uighurs, over the riots and sentenced 26 of them to death.

As for Muslim members of the government throughout Xinjiang, the government forced them to sign “letters of responsibility” promising to avoid fasting, evening prayers, or other religious activities.

“Fasting during Ramadan is a traditional ethnic custom, and they are allowed to do that,” an employee who answered the phone at a local government neighborhood committee office in the regional capital Urumqi said confirming the restrictions.

“But they aren’t allowed to hold any religious activities during Ramadan,” she added.

“Party members are not allowed to fast for Ramadan, and neither are civil servants.”

As for private companies, Uighur Muslim employees were offered lunches during fasting hours.

Anyone who refuses to eat could lose their annual bonus, or even their job, Raxit added.

Officials have also targeted Muslim schoolchildren, providing them with free lunches during the fasting period.

A Uighur resident of Beijing said students under 18 are forbidden from fasting during Ramadan. Moreover, government campaigns forced restaurants in the Muslim majority region to stay open all day.

More restrictions were also imposed on people trying to attend prayers at mosques.

Everyone attending prayers has to register with their national identity card, he added.

“They have to register,” he said.

“[After prayers] they aren’t allowed to [congregate and] talk to each other.”

In Ramadan, adult Muslims abstain from food, drink, smoking and sex between dawn and sunset.

The sick and those traveling are exempt from fasting especially if it poses health risks.

Muslims dedicate their time during the holy month to be closer to Allah through prayers, self-restraint and good deeds.