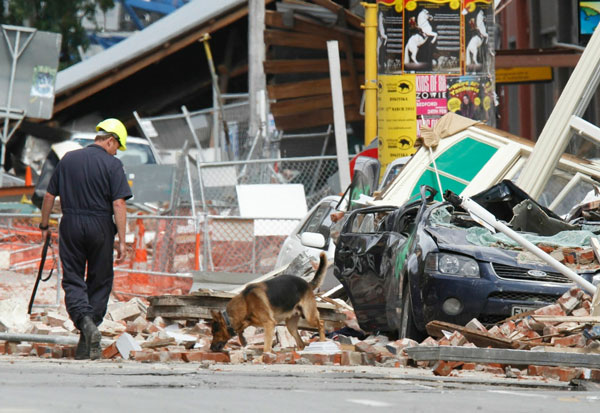 The police national computer has been under scrutiny in the aftermath of the Christchurch earthquake in February because of fears Israeli agents loaded software into the system that would allow backdoor access to highly sensitive intelligence files.

The Security Intelligence Service ordered the checks as part of an urgent investigation of what one SIS officer described as the suspicious activities of several groups of Israelis during and immediately after the earthquake.

Three Israelis were among the 181 people who died when the earthquake destroyed most of Christchurch’s central business district on February 22. One was found to be carrying at least five passports.

An unaccredited Israeli search and rescue squad was later confronted by armed New Zealand officers and removed from the sealed-off “red zone” of the central city.

Police this morning said their systems and the information contained on them were secure, and were subject to regular security audits and intrusion checks.

“We also have a number of anti intrusion measures designed to stop unauthorised or malicious programs from entering or being active on our systems,” Acting Chief Information Officer Murray Mitchell said.

“These systems are regularly being updated and reviewed, and we are confident that our data and network were not compromised during the Christchurch Earthquake response or subsequently.”

It was most likely the four Israelis in Christchurch at the time of the quake were on an identity-theft mission, a political risk consultant has said.

Paul Buchanan, who has worked at the Pentagon and trained intelligence officers in the United States, said it was suspicious that one of the Israelis was carrying multiple passports and that his friends left New Zealand so shortly after he was killed.

He believed the four Israelis were probably on a “trolling mission” searching for identities they could steal.

“Because of New Zealand’s international reputation the passports are extremely valuable for intelligence services. New Zealand has this reputation for independence and autonomy… people trust New Zealand,” he said.

“The passports would have been used for very covert activities – nothing light.”

He said those activities could include assassinations.

“However they may be recruits for the service and this might have been one of the tasks they needed to do, operating as sayanins, which is the Hebrew word for helper,” he said.

KEY CLAMS UP ON SPY CLAIMS

Key was asked repeatedly today to confirm details of an SIS investigation into whether the Israeli secret service had infiltrated the police national computer after three Israelis were killed and other Israeli citizens fled the country.

He said he was satisfied there had been no misuse of the police computer. But when asked repeatedly if there had been an investigation by the SIS he refused to answer because it was not in the national interest.

Key also insisted there had been no misuse of New Zealand passports but when asked to confirm one Israeli had five passports he would only say he was aware they had several in their possession but refused to elaborate.

The Israeli Prime Minister Benjamin Netanyahu called Key four times on the day of the earthquake but Key would only discuss part of those phone calls, which he said were to offer help and advice.

He would not discuss other aspects of the calls.

But when asked repeatedly if the Israeli government had done anything wrong he would not answer, saying it was not in the national interest for him to do so.

Key was also asked about an Israeli search and rescue team being escorted from the Red Zone by armed guards after being found there without permission.

He confirmed he was aware of an incident but “can’t confirm all of the details in the way you’ve presented them”.

When asked to give a correct portrayal of the incident he refused. And when asked why it was not in the national interest to talk about the matters raised in a Fairfax story today Key said it was because he “deemed” that to be the case.

When asked if he was expecting the public to trust him that the national interest had not been compromised Key said:

“If I believed that it was in the national interest for me to disclose the full details that I have then I would do so but I don’t believe it is.”

Key then said: “I hasten to add you are making allegations that are not necessarily correct or proven.”

But when asked if he could provide the correct or proven details he refused.

Labour leader Phil Goff is calling on the Government to “come clean” about what it knows about suspicious activities of Israelis following the Christchurch earthquake.

That included why one of the Israelis was found to have five passports, he said. “This is not something that should be withheld from New Zealanders, we deserve to know.”

EVENTS AFTER THE QUAKE

The response of the Israeli government to the three deaths appears extraordinary. In the hours after the 6.3 quake struck:

Those four Israelis – Ofer Benyamin Mizrahi, 23, from Kibbutz Magal near Haifa, Michal Fraidman, Liron Sade and Guy Jordan – would later become a prime focus of the SIS investigation, along with the Israeli search and rescue squad and a group of forensic analysts from Israel that worked in the Christchurch morgue helping to identify earthquake victims.

The four, two men and two women, had been shopping in the central city on the morning of the earthquake and had returned to their van, parked in Gloucester St, when the quake hit. Mizrahi, the driver, was killed instantly, and Jordan, in the front passenger seat, smashed a window and climbed through the hole to escape. The two women, Fraidman and Sade, who were sitting in the back seat, also managed to crawl out.

They were unable to reach Mizrahi and, after taking photographs of the crushed van, made their way to Latimer Square, where Israeli officials had set up an emergency meeting point. Within 12 hours they had left New Zealand.

On Sunday, February 26, Mizrahi’s body was recovered from the van and taken to the morgue where, during routine identity checks, he was found to be carrying at least five passports.

Meanwhile, the search and rescue squad dispatched from Israel had arrived in Christchurch but the offer of help was rejected by New Zealand authorities because the squad did not have accreditation from the United Nations.

According to Israeli newspaper reports, the squad was being funded by the parents of two other Israelis killed in the earthquake, Ofer Levy and Gabi Ingel, both 22, who were said to be in New Zealand on a backpacking holiday. The parents made repeated public appeals for the Israeli team to join the rescue, appeals that were dismissed by the New Zealand authorities until squad members were discovered in the sealed off “red zone” of the central city.

It is understood the squad members were confronted by armed New Zealand officers and removed from the area. That confrontation is understood to have led to intense diplomatic exchanges between New Zealand and Israel, though police have refused to comment on the incident or even acknowledge that it occurred, and the Israeli ambassador says he had not been advised of any such incident.

Another Israeli group, a forensic analysis team sent by the Israeli government, was welcomed in Christchurch and worked on victim identification in the morgue.

However, the SIS also began to have suspicions about this group when it began investigating possible links between the cache of passports found with Mizrahi, the immediate flight of his three companions, the high-powered Israeli interest shown in the earthquake, the unexplained behaviour of the supposed “search and rescue squad” and a mysterious seventh Israeli, in New Zealand illegally, who was first reported missing in the quake and then, weeks later, was reported to have left the country. They were also interested in the Facebook tribute page set up for Mizrahi that has attracted only five “likes” in the more than four months it has been on the social media site.

When it was realised the forensic analysts could have accessed the national police computer database, an urgent security audit was ordered.

As the SIS officer explained, it would take only moments for a USB drive to be inserted in a police computer terminal and loaded with a program allowing remote backdoor access.

“We were concerned that could have happened,” the officer said.

“We carried out an urgent audit. If it had been done it would eventually have given the Israelis access to all of our intelligence.”

The national database holds all records of convictions, firearms licences, lost and stolen property, criminal behaviour and identifying marks and observations taken by police. It is capable of sophisticated searching and data matching. The officer said the audit had not identified any suspicious files so far, but a wider SIS investigation was continuing.

“It all looks suspicious, but a lot of what the Israelis do raises suspicion. So lots of smoke but we haven’t found any fires. The file remains open though.”

Intelligence agencies have become hypersensitive to sophisticated hacking after the malware “agent.btz” was infiltrated into the computer systems of United States Military Command three years ago.

The US believes Russian agents were responsible and Deputy Defence Secretary William Lynn has described it as “a digital beachhead” for a foreign intelligence agency to attempt to steal data. Attempts to remove the malware have so far been unsuccessful – new, more potent variations of agent.btz are still appearing.

The SIS officer said the agency was also aware of a comment posted on the website of the Russian newspaper Pravda that the Christchurch earthquake had disrupted an Israeli spy base in the city.

The Southland Times asked police national headquarters for comment on the actions and activities of various Israeli groups after the earthquake. After considering the request for nine days, the police issued a brief statement, attributed to Assistant Commissioner Malcolm Burgess, confirming that three Israelis had died in the earthquake, that the van in which Mizrahi died had been recovered and examined, that police had not been involved in the decision to exclude the Israeli search squad, and that “police do not discuss or disclose details of personal effects found with any of the 181 victims”.

Mr Tzur, also approached for comment, said it was “science fiction” that any Mossad agents had been involved.