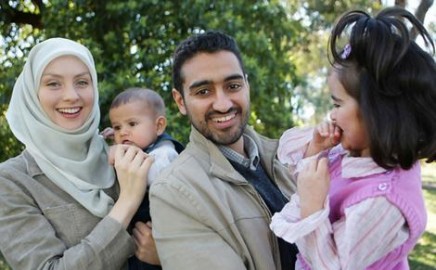 What will you do if your beloved mother tells you “I don’t care if you marry a drug dealer, but don’t marry a Muslim?”

This is exactly what was told to Susan Carland when she was 17 years old after declaring that one of her New Year’s resolutions was “to investigate other religions.”

Of course, Islam was not in her priority list as she used to say “It looked violent, sexist and foreign.” Two years later, at the age of 19, Susan who has been raised as a Baptist became a Muslim without the influence of any man!

This was the same girl who at around 14 years of age had joined a “funky, happy, clappy church” that was part of the charismatic movement. Around her, people were claiming to speak in tongues and announcing that God had spoken to them in the night.

One night, her mother announced they were having pork chops for dinner. That was when the mother discovered that her daughter had become a ‘victim’ of Islam. “My mother gave me a hug,” she recalls, “but she was crying.” A few days later, Susan began wearing a headscarf.

For eight years, after the conversion to Islam, there had been a rift between Susan and her mother. However, they are now in good terms. Susan says: “Now, my mum even buys me head scarves and sends presents to my children for Eid.” Susan had found that Islam, “… didn’t have that intellectual divide between mind, body and soul that I had found in Christianity.” Carland also converted to Islam because she found that “the nature of God in Islam… appealed to me,” she says.

Susan has completed a Bachelor of Arts and a Bachelor of Science and in 2007 she was completing her PhD, researching leadership challenges facing Western Muslim women. She is now a lecturer and a tutor in the School of Political and Social Inquiry at Monash University in Melbourne, where she specializes in gender studies, youth and sociology of religion. She has come to love Islam and Muslims, “Without doubt,” she says, “the most inspiring and wonderful people I’ve ever met in my life are Muslims and that’s certainly helped me not withdraw from the community altogether”.

In February 2002 at a ceremony in Melbourne Zoo, Susan got married to Melbourne lawyer Waleed Aly, who is on the executive of the Islamic Council of Victoria. Born in Australia to Egyptian parents, Waleed has degrees in law and engineering and works for a big city law firm. Waleed Aly is now a lecturer in politics at Monash University and works at the Global Terrorism Research Centre.

In 2006, Waleed was one of 90 young Australians chosen to attend the Australian Future Directions Forum to generate ideas for the next twenty years of Australia’s future. And in 2007, he was named one of The Bulletin magazine’s ‘Smart 100’. He is also the author of People Like Us: How arrogance is dividing Islam and the West. The couple have a daughter named Aisha. Susan converted to Islam independently of Waleed as she says, “… when I became Muslim Waleed and I weren’t together. I was very much a single woman and us sort of deciding to get married happened years after I became Muslim.”

Susan is a creator and panellist on the multi-award winning Australian national network television program Salam Cafe, and is often consulted for commentary about Islam and Muslims in a variety of mainstream media. Susan has been invited to speak at various churches, Jewish groups, schools, community groups, and business organizations, and was invited to give the International Women’s Day address at the Victorian Parliament house in 2003.

Besides being a researcher for the Centre for Muslim Minorities and Islam Policy Studies at Monash University, Susan is also a youth worker with Grassroots, an initiative of the Islamic Council of Victoria, which aims to address and serve the specific needs of young Australian Muslims. Susan is a state-coordinator for the Train the Trainers Course in Dawah and Dialogue. In 2009, she was named one of the international ‘Muslim Leaders of Tomorrow’ by the UN Alliance of Civilisations.

I felt the sense of intellectual liberation… I started going to Muslim internet chat rooms… I was put in contact with Muslim women who were studying at my university who patiently answered my questions… when I let the religion speak for itself through its traditions, scholars and holy text, as opposed to taking the words of tabloid journalists or appallingly behaving Muslims, I found a faith that was peaceful, egalitarian, socially just, and with a beautiful balance of the spiritual and the intellectual…

Susan Carland was proclaimed the Australian Muslim of the Year 2004, a prize worth $2000 to be distributed to charities of her choice which she accepted on two conditions: that she would spend the money in Australia and give to non-Muslim as well as Muslim organizations.