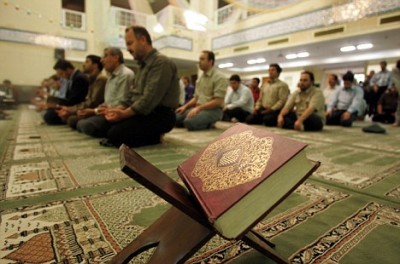 Mr Blair said it was “crucial” to be “faith-literate” in the 21st Century.

“I read the Bible every day. I read the Qur’an every day,” he told The Observer. “Partly to understand some of the things happening in the world, but mainly just because it is immensely instructive.”

While giving an interview as Prime Minister, Mr Blair was famously interrupted by his spin doctor Alastair Campbell who told the journalist: “We don’t do God.”

Since leaving Number 10, Mr Blair has set up the Tony Blair Faith Foundation, to promote respect and understanding between the major religions.

In The Observer interview he talked about the wars in Iraq and Afghanistan, saying: “People still ask me if military decisions in Iraq or Afghanistan were based on some kind of divine instruction.

“It’s rubbish. Of course not. Just as I couldn’t go into a corner and pray to ask God what the minimum wage should be.”

The 58-year-old ex-Labour leader also admitted that although he realised how important social media was for revealing injustice he had no idea how it worked and had never used Twitter.

He insisted he did not mind not being invited to the recent royal wedding, adding: “They have their protocols and it didn’t trouble me in the least that I wasn’t there. I was absolutely fine about it. Really. And that’s the honest truth.”