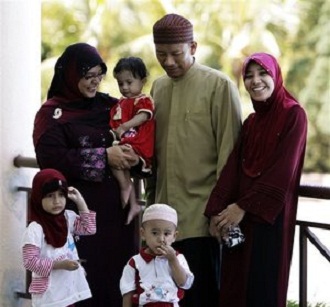 The Obedient Wives Club, which was set up by a group of Muslim women, said domestic violence, infidelity and prostitution stemmed from a lack of belief in God and a failure of women to satisfy their husbands.

The club’s president, Rohaya Mohamed, said it was open to women of all religions and would conduct seminars on how to be a good wife as well as offer marriage counseling.

“A man married to a woman who is as good or better than a prostitute in bed has no reason to stray. Rather than allowing him to sin, a woman must do all she can to ensure his desires are met,” Rohaya told the newspaper.

But rights groups say women are still often victims of gender bias, and have protested what they considered the club’s demeaning portrayal of women as a cause of social problems.

“Abusive men often use women’s behaviour as a sick justification, but in the end, their actions are their responsibility,” said Ratna Osman, acting executive director at rights group Sisters-in-Islam.

“To hinge fidelity, domestic violence and the fulfillment of a husband’s responsibilities purely on a wife’s capacity to be obedient, stimulate sexual arousal … is not only demeaning to wives, but to husbands as well,” said Women, Family and Community Development Minister Shahrizat Jalil.