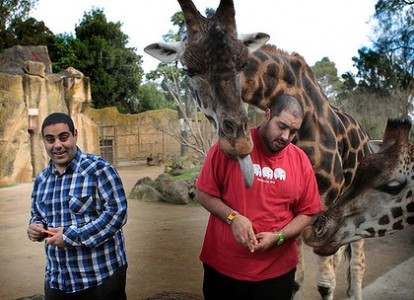 Could Mo and Mos be the least likely reality TV stars ever? Chubby, slow and still in the show only by the skin of their collective teeth, Mohammed El-leissy (Mo) and Mostafa Haroun (Mos) are the Muslim mates from Melbourne who have entrenched themselves (alongside the now-departed Big W ladies) as firm fan favourites on The Amazing Race Australia, Seven’s local adaptation of the long-running US series.

Three episodes in and they have already come so close to elimination so many times that no one gives them much chance of winning the series, but there’s no denying they’ve won viewers over. And that, says Mo, is victory enough.

”Up until now the media’s engagement with Muslims has been a little tokenistic,” says the 26-year-old social worker from Brunswick. ”They try to do good stories, but it’s all, ‘Oh look, it’s the hijab in football colours.’ They’ve been trying to push a really positive message, which is great, but for us on the receiving end, it’s a bit like, ‘Oh look, they’re human.’ ”

The Amazing Race is different, he says, despite the fact early publicity played up the challenges of the boys, both practising Muslims, having to stop to pray five times a day. ”With us, they’ve put our humanity before our faith,” he says. ”We’ve reached a new audience on Channel Seven that never get to see a positive story about Muslims.”

Not that they’re keen to see themselves as role models. ”If I was ever to be a role model, it would be for ‘eat more food’,” jokes Mos, who works part-time in the gift shop at Melbourne Zoo.

The boys have developed a fine line in self-deprecating humour and have vague ambitions to spin that into a media career. They’ve been working on a demo of a radio show that they hope to shop around and have been working up short videos for YouTube in which they share their insights into just-aired episodes of the series (details of coming episodes are, of course, strictly off limits under the terms of their confidentiality agreements with Seven).

It’s not that either of them is desperate for a showbiz career, just that they’re up for whatever comes next. After all, that’s what took them to the show in the first place.

Mos had just started a new job when he got a call at 2am from his mate Mo asking if he’d do a video audition; Mo had made it to the last stage of auditions but the mate he’d got there with had bailed at the last minute.

”To be honest, he was about the eighth person I called,” says Mo.

Undeterred, Mos jumped at the chance and filed his audition an hour later. The next morning, he was at the production office for an in-the-flesh audition. A week later, he and Mo were off and running. Well, make that off and walking a little bit faster than usual. ”We don’t run anywhere,” says Mos. ”I went to the gym … once,” says Mo.

In fact, Mos has a master’s in sports business, but has never had the opportunity to put it into practice in the workplace. How come?

”No one seems to like my name when I apply,” he says, suggesting that while the reality TV world has embraced him and his faith, the real world remains a little more of a challenge. ”I can’t get my foot in the door, get that interview, even though I am qualified. And when I do get interviews, people are surprised I speak with an Australian accent.”

Right now, there’s a fair chunk of Australia that’d be willing to shout him a glass, too.