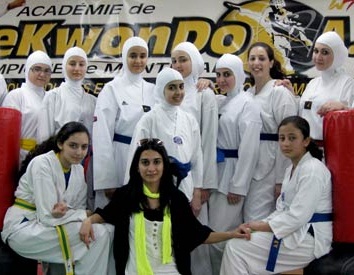 Letting out shrill cries, several young women in a Montreal taekwondo class kicked their way through the exercises, not a hair out of place as they were demurely covered by an Islamic sports hijab.

Their religion prohibits these female athletes from showing off their firm physiques, or their hair. Yet Western society also frowns on the wearing of traditional Muslim headscarves in sports competitions.

So Iranian-born Canadian designer Elham Seyed Javad came up with an idea to marry the two worlds and allow young girls and women to take part in physical activities while also adhering to strict Islamic rules.

And the order books for the 27-year-old’s start-up are fast filling up with calls for her head coverings arriving from around the world including Japan, Germany and Australia.

The company iQO Design is now eyeing a lucrative contract to supply the Iranian women’s football team, with the aim that they will be worn during the next Olympic Games.

The idea came to the young designer in 2007 after five young Muslim women were thrown out of a Montreal taekwondo tournament because their headscarves were deemed by the sports federation to be dangerous.

Seyed Javad, who was studying industrial design at the University of Montreal at the time, was outraged but instead of protesting decided to find a solution.

At school, she designed a slip-on hooded t-shirt made of stretch fabric. The university immediately seized on its potential: its agency for commercializing its scientific discoveries and inventions filed patents for the sports hijab on her behalf in Canada and the United States.

Made of a fabric that moves perspiration away from the body, the garment slips on like a balaclava and is tied at the back. “It’s much less hot, and it stays in place,” says trainer Gaelle Texier. And, she adds, it doesn’t mess up your hair.

“It’s a compromise,” said taekwondo student Asmaa Ibnouzahir. “It allows us to play the sports we enjoy, that we were doing but were forced to quit.”

The university’s commercial unit, Univalor, said it has even greater potential.

“Of course we looked to market it to young Muslim women in sports, but also for F1 racing, go-carting, and hospital operating rooms,” said Univalor’s Thomas Martinuzzo.

It is not just for athletes, he explains. An Australian policewoman, for example, recently started wearing one as part of a trial.

The so-called ResportOn is currently sold for 63 dollars (44 euros) over the Internet.

Each prototype is designed and sewn in a Montreal studio, adapted to suit the particular circumstances of each customer. But Javad is already dreaming big, and hopes one day to sell the garment in sports stores everywhere.

Since the ResportOn first went on sale in November interest has skyrocketed, attracting attention from 170 cities around the world.

The start-up behind it has also partnered with an investor and recruited a sales representative in Iran.

The company is now pitching its wares to hospitals and racing drivers, as well as people with dreadlocks who want to keep their prized hairdos in place even when out on the sports field.