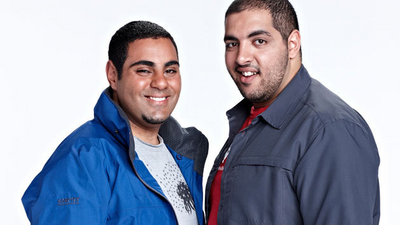 Melbourne mates Mohammed and Mostafa share a strong friendship and an Islamic faith. Will their background create a few extra obstacles on the race?

Australian born and bred, Mohammed and Mostafa both have Egyptian parents and a similar “cuddly” build, meaning they’re often mistaken for brothers.

“People always point out that we look really similar. Of course the big debate is ‘Who’s better looking?’ I think we’ll have to sort that out on the race,” says Mohammed.

Mostafa, 25, says being a young Muslim man could pose a few added challenges not faced by other teams on the race.

“People might think there’s something suspicious about two young Arab Muslim men running around madly with backpacks on,” adds Mohammed, 26. “I would say that 70 per cent of the time I get stopped for random security checks in airports.”

Aside from losing time to security screening, Mohammed and Mostafa’ faith means they must also stop to pray five times a day.

“Who knows? Just taking five minutes to stop and pray might just help us focus. And that could be just what we need to win the race,” says Mostafa.

The boys don’t necessarily see their weight as a disadvantage.

Mohammed says: “There have been people in the race who have been fatter than us. I don’t think it’s a barrier for us to win. The other teams with their six packs might be looking at us and going,

‘Don’t worry about those guys,’ which works in our favour.”

Mohammed and Mostafa met three years ago at a leadership course. They cite their experience of different cultures as one of their greatest strengths.

As a multicultural youth worker for the past five years, Mohammed says, “That’s given me access to people from lots of different backgrounds so I know about many cultures around the world.”

Mostafa has similar experience through his volunteer work at RISE, a group which assists refugees and asylum seekers. He has also completed a degree in Sociology and a Masters in Sports Business.

While they have plenty in common, their approach to the race could differ.

Mohammed says, “I’m far more driven. Honestly, the thing I’m most scared about with Mostafa is that we’re at the start line and Grant says, ‘Go’ and I’m going to run and Mostafa will just start walking. He’ll be like, ‘Yeah, there’s no rush.’ He’s a very relaxed guy. Whereas I’ll be stressed about not knowing what’s happening next.”