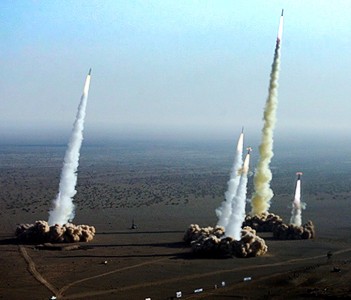 An American bunker busting bomb being handled on the USS Kitty Hawk aircraft carrier. The US and Israel wanted to keep quiet that Israel was buying the weapons, fearing it would look like preparations for attacking Iranian nuclear facilities. Photograph: Reuters

Israel regarded 2010 as a “critical year” for tackling Iran’s alleged quest for nuclear weapons and has warned the United States that time is running out to stop Iran from acquiring a nuclear bomb.

Ehud Barak, Israel’s defence minister, told American congressmen in June 2009 there was a window of “between six and 18 months from now in which stopping Iran from acquiring nuclear weapons might still be viable”. After that, Barak said – in a striking admission recorded in a confidential state department document – “any military solution would result in unacceptable collateral damage”.

Barak’s comments were one of many occasions in the last five years when Israeli leaders and officials have hammered home the message to the US that Iran’s nuclear ambitions pose an “existential” threat to Israel. Israel is widely believed to have an extensive nuclear arsenal but under its policy of “ambiguity” it has never been avowed. Unlike Iran it has not signed the Nuclear Non-Proliferation treaty.

Israel saw 2010 as a pivotal year. “If the Iranians continue to protect and harden their nuclear sites it will be more difficult to target and damage them,” the US embassy reported Israeli defence officials as saying in November 2009. In a discussion of the upcoming delivery of GBU-28 bunker-busting bombs to Israel it was noted that the transfer “should be handled quietly to avoid allegations that the US government was helping Israel prepare for a strike against Iran”.

Secret cables originating from the US embassy in Tel Aviv record the head of the Mossad secret service, Meir Dagan – along with senior military men and diplomats – repeatedly explaining to US visitors Israel’s concerns and strategy for confronting Iran, including a readiness to take military action.

By late 2009 the Mossad’s view was that “there is no reason to believe Iran will do anything but use negotiations to stall for time so that by 2010-2011, Iran will have the technological capability to build a nuclear weapon – essentially reducing the question of weaponising to a political decision”.

Dagan told an American politician in March 2005: “Iran has decided to go nuclear and nothing will stop it.” Israel and the US sometimes differed in their analysis, the Mossad chief conceded, but the facts themselves were “not in dispute”.

US officials repeatedly expressed concern about conflicting assessments by their Israeli counterparts, some of whom admitted that their own estimates should be treated with caution: one diplomat noted that Israeli assessments from 1993 onwards had predicted that Iran would possess an atomic bomb by 1998 at the latest.

“We should recognise that Israeli intelligence briefings will understandably focus on worst-case scenarios and may not match current US government assessments,” commented the US ambassador, Daniel Kurtzer.

By the end of 2009 the view from Israeli military intelligence was that by 2012 Iran would be able to build one nuclear weapon within weeks and an arsenal within six months. “It is unclear if the Israelis firmly believe this or are using worst-case estimates to raise greater urgency from the United States,” a US diplomat responded. General Amos Yadlin, Israel’s military intelligence chief, acknowledged differences with the US but observed to a visiting congressman in summer 2009: “Israel is not in a position to underestimate Iran and be surprised like the US was on 11 September 2001.”

The director general of the Israeli defence ministry said around the same time: “All options must remain on the table.” The official “acknowledged that part of his job was ensuring Israel was ready to employ such an option, no matter how undesirable it may be”.

The Tel Aviv embassy has been sharply aware of differing views within Israel, noting in 2007 an increasing sense from diplomats and think-tank experts on Iran that military action must be a last resort. “The IDF [Israel Defence Forces], however, strikes us as more inclined than ever to look toward a military strike, whether launched by Israel or by us, as the only way to destroy or even delay Iran’s plans,” it reported.

Dagan, an army general appointed to head the Mossad by Ariel Sharon, was seen by American officials as a pessimist on the Iranian nuclear issue. But a White House interlocutor found him “surprisingly optimistic” in mid-2007 about the effect of two UN sanctions resolutions in “stigmatising Iranian businesses and discouraging risk-averse Europeans from being connected with Iran”.

• Bring Iran before the UN security council to pursue a third sanctions resolution; • “Covert measures: Dagan and the under-secretary agreed not to discuss this approach in the larger group setting”;

• Counter-proliferation: prevent know-how and technology from making their way to Iran;

• Sanctions – the biggest success so far. Three Iranian banks were on the verge of collapse. Financial sanctions were having a nationwide impact.

• Regime change. Israel believed more should be done to foment this, possibly with the support of student democracy movements and ethnic groups such as the Azeris, Kurds and Baluchs.

State department cables show Israel was sceptical about the effect of political pressure on Iran, especially by the EU. But it was maintaining “low-profile diplomatic activities such as supplying IAEA [International Atomic Energy Agency] members with intelligence material related to the Iranian program”.

Israel’s foreign ministry feared “any overt Israeli pressure would backfire, leading to a surge of Arab support for Iran and focusing attention on Israel’s own nuclear activities” – a rare reference to a highly sensitive issue. In 2005 US diplomats were told by a senior military intelligence official that Israel did not know where all Iranian nuclear targets were located and that any attack would only delay, not end, the programme. Potential targets were well dispersed throughout the country, with several in built-up civilian areas.

Public speculation about possible strikes focused on the differences from the Israeli attack on Iraq’s Osirak reactor in 1981. “In private,” the US embassy reported, “government officials have acknowledged that several factors would make any attack against Iran a much more difficult mission.”

It added: “It may not be possible to detect preparations for any military strike. Air defence operations would pose nearly perfect cover for civil defence and air force activities preceding any attack. Due to both the extreme sensitivity of the issue and the government of Israel’s near inability to prevent leaks, any attack order would be closely held.”

Dagan encouraged and commended US efforts to put pressure on Iranian banking facilities, forcing a move to banks in the Gulf states and the far east, and Swiss and Japanese banks forgoing business with Iran. The Mossad was keeping up pressure on this front, he revealed in 2006.

By late 2008 the Mossad assessed that the economic problems Iran was experiencing as a result of sanctions were encouraging debate within the Iranian regime. “The pressure is on,” Dagan told the US treasury undersecretary for terrorism and financial intelligence, Stuart Levey. “But he could not estimate when Iran would hit the brink.”

Optimism on this front had faded by late 2009, when Tehran appeared to have regained full control after the popular unrest that followed that summer’s disputed presidential elections.

Amos Gilad, the influential political-military director of Israel’s defence ministry, told a high-level US delegation that efforts to persuade Tehran to comply with international demands were its “last chance”. But Iran remained determined to reach the “nuclear option”, which Gilad described as “intolerable”. Iran, in the view of a Mossad representative at the meeting, could continue to “play for time” while pursuing its strategic objective to obtain a military nuclear capability.

“From Mossad’s perspective there is no reason to believe Iran will do anything but use negotiations to stall for time so that by 2010-2011, Iran will have the technological capability to build a nuclear weapon – essentially reducing the question of weaponising to a political decision.”