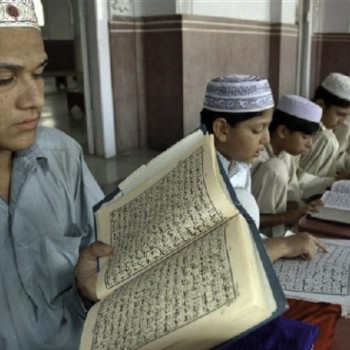 Until earlier this year, one 19-year-old student from the Tajik capital, Dushanbe, was known as Shohrukh to his friends and family.

But he recently decided to ditch his “purely Tajik” first name and now answers to “Muhammad,” the name of Islam’s prophet.

“I came to this decision gradually,” Muhammad says. “I learned about Islam and wanted to get a suitable Muslim name for myself.” He says that he heard that “on Doomsday, everyone will be called by their first names, so I wanted to be called Muhammad.”

Like Muhammad, those who have chosen new names are largely young men in their late teens and early 20s. And an increasing number of parents are picking Islamic names for their newborn babies.

Experts say the trend reflects the growing influence of Islam among Tajiks.

Approximately every fifth baby girl born in Dushanbe gets an Islamic name, and the most popular girl’s name is Sumayah, according to officials in the capital’s civil-registration office.

“Other newly popular names for girls include Asiya and Oisha, a Tajik version of the Arabic name Aisha,” says Zebo Bobojonova, the director of the Shohmansur civil-registration office in Dushanbe.

“We wouldn’t hear such names five years ago, when Iranian and Indian names like Googoosh, Anohito, and Indira were among the most desired names by parents coming to our office to get birth certificates for their babies,” Bobojonova says.

Aisha is the name of one the prophet’s wives, while Asiya is the name of a Muslim noblewoman mentioned in the Koran. According to Islamic teachings, Sumayah was the first martyr of Islam.

Names of prominent Islamic figures such as Muhammad, Yusuf, Abdullo, and Abubakr have become a trendy choice for Tajik baby boys.

Some local mullahs and imams encourage people to choose Islamic names for their children. Hoji Mirzo Ibronov, a prominent mullah and the imam of a mosque in the southern town of Kulob, says that as a local religious leader it’s his duty to convey the hadiths, sayings and deeds attributed to the Prophet Muhammad, to Muslims.

“I tell people that Allah prefers names like Abdullah and Abdurrahmon, and generally names with the combination of “Abd” [meaning ‘servant’ in Arabic] followed by another word describing Allah, such as Abdulqahhor, Abdulmannon, and Abdurrahim,” Ibronov says. “We tell people that according to the hadiths, Allah likes such names.”

Mullahs and imams enjoy enormous respect among their local communities, as Islam is on the rise in the country. Boys as young as 6 or 7 years old usually attend evening prayers in their neighbourhood mosques, followed by the imams’ sermons.

Dilshod Rahimov, a Dushanbe-based specialist on art and culture, says such sermons and the abundant religious literature have a vast influence on young people’s mind-sets.

“Young men who are changing their first names to Islamic names are putting their religious identity before their national identity. Everybody has the right to choose whatever name they want for themselves or for their children, but I think it is somehow superficial,” Rahimov says.

“You don’t have to have an Islamic name to be a proper Muslim. For instance, in the Islamic Republic of Iran, people follow their religion but they don’t have to bear Arabic and religious names.”

Names like Sumayah or Asiya were almost unheard of in Tajikistan just a few years ago, when many parents preferred Old Persian names for their children.

In the 1980s and 1990s, the names of the characters from the 10th-century Persian poet Abulqasim Firdawsi’s epic “Shahnameh” were the most popular both for baby girls and boys.

Hundreds of thousands of Tajik girls were named after Persian princesses and queens, such as Tahmeena, Gurdofarid, and Sudoba, while pre-Islamic royal names like Siyovush, Faridun, Jamshed, and Bezhan were fashionable names for boys.

At that time, following the collapse of the Soviet Union, local media encouraged a revival of the country’s ancient Persian heritage.

But some of those Jamsheds are now trading in their names for Islamic ones, Rahimov says. After all, Jamshed was a Persian monarch who followed Zoroastrian teachings.

As for 19-year-old Muhammad, he has yet to officially register his new Islamic name. The legal process for changing your name is a lengthy, complicated, and costly process in Tajikistan.

It involves obtaining letters and references from a variety of government agencies, including local authorities, local and central registry centres, and Interior Ministry branches, among others. Applicants are also required to provide police clearance certificates from every place they have lived since the age of 16, along with a letter from their school or workplace.

In addition to bureaucratic hurdles, the rampant bribery in government agencies makes the process even more expensive. It’s a common practice in Tajikistan to pay bribes for every document or letter people get from government offices, if they want to obtain the document on time.

But it doesn’t really matter, Muhammad says. “My friends and family call me by my new name and that’s enough for now,” he says.