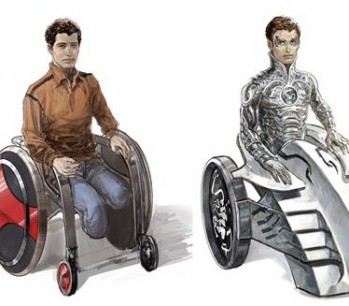 It’s not a bird, or a plane… but a Muslim superhero – in a wheelchair.

Comic books fans will soon meet at an “unlikely new superhero” – created by a group of disabled young Americans and Syrians who were brought together last month in Damascus by the Open Hands Initiative, a non-profit organization aimed at “improving people-to-people understanding and international friendship.”

The initiative was founded by U.S. philanthropist and businessman Jay T. Snyder.

Though the superhero’s appearance hasn’t been finalized, an early sketch shows a Muslim boy who lost his legs in a landmine accident and later becomes the Silver Scorpion after discovering he has the power to control metal with his mind.

“The first comic book is set to come out in early November in both Arabic and English,” said Sharad Devarajan, co-founder and CEO of Liquid Comics. Devaranjan’s company is currently turning the group’s ideas into pictures and a story line.

Snyder said he was inspired by President Barack Obama’s effort to reach out to the Muslim world in his January 2009 inaugural address.

He launched the Open Hands Initiative last November to respond to the President’s offer to the Muslim world to extend a hand if you are willing to unclench your fist.

As part of the Initiative, Snyder flew 12 disabled Americans to Damascus last month to meet their Syrian peers and come up with ideas and story lines for the new superhero.

The only limit was the imagination these kids had — the opportunity for a great story, said Snyder, a comic book collector who heads HBJ Investments LLC. They helped create something by their combined talents, and that becomes a gift to the world.

Devarajan said he found the young people’s imagination to be quite amazing.

“The opening question we asked the kids was if you could have any superpower what would it be? I’ve asked that question in many different groups before and the typical answers are always the ones you’d expect — flying, reading minds, or being super strong,” he said.

According to Devarajan, none of the youth gave the typical responses.

“Each of their ideas was so originally distinct, whether the Syrian kids or the U.S. kids,” he said.

Devaranjan said that perhaps because of their disabilities, the young people think as individuals rather than being influenced by others.

“One girl wanted to have the power to combine the energy of the moon and the sun, for example.”

Devarajan said it was noteworthy that no one in the group wanted the hero’s power to be something that cured their disability.

“They were empowered by their own disabilities, and they should not be seen as a source of weakness,” he said.

An initial 50,000 Arabic-language comics will be distributed throughout Syria, with subsequent distribution throughout the Middle East, Snyder said. Digital copies of the comic will also be available worldwide for free through the Open Hands and Liquid Comics websites.

“The comic will be the first in a series of international superheroes, and while one will have disabilities others will not,” Devarajan said.

“Almost all the characters being planned are based on the seeds that were created by these kids together in this trip,” he added.

The dozen Americans were selected by The Victor Penada Foundation, a non-profit educational organization that promotes the rights of young people with disabilities. The group included youths who were blind, deaf, using wheelchairs, or suffering from Down syndrome, autism, and cognitive disabilities.

The Syrians were invited by the Al-Amal school for the disabled – chaired by Asma Assad, the wife of Syrian president Bashar Assad, who spent an afternoon meeting with the group.

“It must be every child’s dream to create a superhero,” the Syrian first lady told the Associated Press. “But I really do hope that we can bring our powers together — our human powers together — to be able to make a difference.”

Hamza Jaka, co-chair of Kids as Self-Advocates — a group that promotes the rights of young disabled people — said “the visit to Syria was great because it was people-to-people, not politicians flying in and blustering.”

A freshman linguistics major at the University of California at Berkeley, Jaka said the trip has inspired him to study Arabic.

“There’s a lot of hatred, and it really can be dispelled by just sitting down and talking to people and realizing you share experiences in common,” said the 18 year old of Fontana, Wisconsin. “That’s what happened when I started talking to one of the disabled Syrians. We both discovered that we had a love of basketball and … loved the same players, Kobe Bryant and Shaquille O’Neal.”

“I am a disabled Muslim and I love comic books, so this is like the highlight of my life,” said Jaka, who has cerebral palsy and uses a wheelchair.”

“As somebody who owns a lot of comics and has studied how they affect social change, it was fun to be part of an exchange that hopefully can do the same,” he said.

Jaka said he hopes the exchange can change attitudes towards the disabled, towards Muslims, and towards Syria.

Abdulrahman Hussein, 20-year old Syrian student who was born handicapped and uses a wheelchair, said “meeting the young Americans made me feel that I have to improve my life.”

Hussein is studying library administration at a university and wants to learn English so he can have contact with more people, he said.

“I like the American people as I found them friendly,” Hussein said. “I’d like to visit America because I want to get acquainted with the achievements (of) the Americans.”

One program in the initiative already underway will bring Syrian music to the U.S. and plans to bring leading American artists to Damascus for workshops with young Syrian artists.

Snyder said Open Hands hopes to expand in Pakistan with programs bringing Americans and Pakistanis together in the fields of public health, literature and culture. Later in the year it intends to launch projects in Afghanistan.