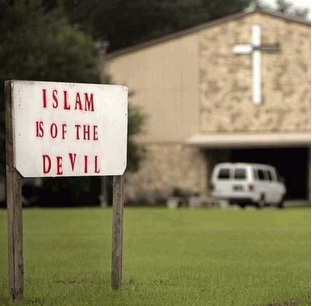 The Quran-burning controversy in the United States has prompted the Islamic bloc at the United Nations to revive its call for the U.N. to set up an “international monitoring mechanism” to track incidents of “Islamophobia.”

Five years after establishing an “Islamophobia Observatory” of its own, the Organization of the Islamic Conference (OIC) is now calling on the U.N.’s top human rights official to set up a comparable body at her Geneva office. According to the OIC, human rights commissioner Navanethem Pillay has agreed to consider the proposal.

At the U.N. Human Rights Council this week, OIC members are also seeking support for a resolution condemning Florida pastor Terry Jones’ abortive call to burn copies of the Quran on September 11.

Introduced by Pakistan on behalf of the OIC, the text condemns “the recent call by an extremist group to organize a ‘Burn a Koran Day’” and says it was among “instances of intolerance, discrimination, profiling and acts of violence against Muslims occurring in many parts of the world.”

When it comes to a vote — before the Council’s session in Geneva ends next Friday — the measure almost certainly will pass. The OIC controls more than one-third of the Council’s seats, and its resolutions are routinely backed by non-Muslim allies such as China, Russia, Cuba and South Africa.

Moreover, Western democracies which usually oppose OIC “Islamophobia” and “religious defamation” measures at the HRC – on freedom of expression grounds – will not likely do so in this case, having strongly condemned Jones’ threats earlier this month.

U.S. ambassador to the HRC Eileen Chamberlain Donahoe wrote to Pillay in late August, deploring Jones’ threatened action and telling her that the U.S. “supports the full use of your office and moral authority to speak out against intolerance and instances of hate speech where they occur.”

The new resolution was circulated in Geneva after OIC secretary-general Ekmeleddin Ihsanoglu, in an address to the Council, urged Pillay to set up an “observatory” in her office to monitor and document acts like threats to desecrate the Quran, and to report back to the HRC annually.

Ihsanoglu in his speech also said national government should take specific steps to combat religious intolerance and stereotyping, including “adopting measures to criminalize the incitement to imminent violence based on religion.”

Ihsanoglu met separately with Pillay and, according to an OIC statement, told her that incidents like Quran desecration “posed grave danger to global peace, security and stability.”

He pressed for her office to set up an “observatory” or “international monitoring mechanism” to monitor and document such acts.

The OIC said Pillay has given Ihsanoglu her assurance that she would “look into reviving the issue of the observatory” proposal.

Asked to confirm this account, a spokesman for Pillay said he would look into the matter, but did not respond by press time.

The call for the U.N. to set up an “Islamophobia monitoring mechanism” was made as early as 1997, when Iran’s ambassador raised the issue at a General Assembly committee meeting. It was repeated during the controversial Durban conference against racism in 2001 and on occasions since.

The OIC set up its “Islamophobia Observatory” at its headquarters in Jeddah, Saudi Arabia, as part of a 10-year plan of action adopted in 2005. The observatory issued its first report in March 2008, covering the period May-Dec. the previous year.

It has since issued two further reports, the most recent of which documented incidents in Western countries ranging from the Swiss ban on minaret building to complaints that pork was served in a supposedly vegetarian dish at a Christmas buffet for postal workers in Britain.

The same report cited President Obama’s June 2009 speech in Cairo, pledge to close the Guantanamo Bay detention facility and dropping of terminology seen as offensive to Muslims as optimistic indicators.

The OIC has become increasingly assertive at the four year-old HRC, where the absence of binding entry criteria and regional seat allocation have enabled it to control a significant proportion of seats – currently 18 out of 47.

With support from China, Russia and others it has used its clout to pass multiple resolutions condemning Israel and to get annual resolutions passed on the “defamation” of religion – both at the HRC and in the broader U.N. General Assembly.

The decade-old campaign has prompted mounting opposition in recent years from religious freedom, free speech and other advocacy groups. Critics accuse the OIC of trying to export to the West blasphemy laws in place in some Islamic states, and to restrict free expression to shield Islam and Islamic practices from legitimate scrutiny.

As awareness has grown, the OIC has seen annual support for its resolutions wane , with more countries – especially in Latin America in the Asia-Pacific – moving to the opposition column.

But the OIC’s activism in Geneva this week signals that it plans to use the Quran-burning controversy to breathe new life into the campaign and stem to declining support.

While visiting Geneva, Ihsanoglu met with Islamic ambassadors, praised them for “enhancing the visibility and credibility of OIC as the second largest international organization.”

“He emphasized the need for improved coordination and greater unity in the ranks with a view to presenting a unified stance on issues of importance to the OIC, including the defamation of religions,” the OIC said in a statement.

“We are at a critical juncture,” Agnes Callamard, executive director of the free expression campaign Article 19, told a panel on the subject in Geneva on Monday.

“There had been a decrease in support for prohibitions on religious defamation here at the U.N. But recent events – the Florida pastor’s plan to burn copies of the Quran, bans on wearing the veil in Europe, the ban on the construction of minarets in Switzerland – mean there is again pressure to entrench this concept in international law.”