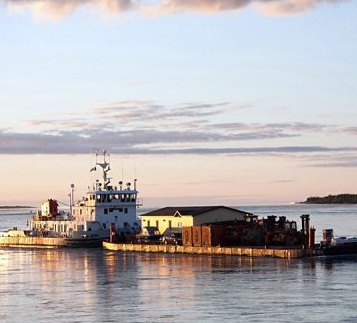 Canada — A small mosque has arrived in the Arctic to serve a growing Muslim population in Canada’s far north after travelling 4,000 kilometers (2,485 miles) over land and water, the project leader said Thursday.

“The entire Muslim community of Inuvik went to the dock to greet the mosque — men, women and children, about 80 people — when it arrived Wednesday afternoon,” Hussain Guisti told AFP by telephone.

“It was the first time there were no taxi drivers in all of Inuvik,” he quipped. The few cabs in town are apparently all driven my Muslim men.

The number of Muslims in Inuvik, a town of 4,000 inhabitants in Canada’s Northwest Territories, has grown steadily in recent years to about 80 and they no longer fit in an old three-by-seven-meter (10-by-23-feet) caravan used until now for prayers.

The congregation could not afford to build a new mosque in the town, where prices for labor and materials are substantially higher than in southern parts of Canada, local project coordinator Ahmad Alkhalaf said last month.

But they found a supplier of prefabricated buildings in Manitoba that said it could ship a structure to Inuvik for half the price of building a mosque from scratch on site.

A local Muslim charity — the Zubaidah Tallab Foundation of Thompson, Manitoba — also offered to pick up the costs for the 140 square meter (1,500-square-foot) facility, Alkhalaf said.

And so, at the end of August the tiny yellow mosque’s voyage began on the back of truck, winding through the vast prairies and woods of Western Canada toward Hay River on the shores of Great Slave Lake, Northwest Territories.

There it was transferred onto a barge and floated down the McKenzie River to Inuvik, about 200 kilometers (124 miles) north of the Arctic Circle.

It must still be unloaded and moved to a parcel of land purchased by the congregation in a residential part of the town, and topped with a minaret before it is ready on November 5 to welcome worshippers — largely Sunni Muslim immigrants from Sudan, Lebanon and Egypt who moved to Canada’s far north in search of jobs and economic opportunities.

The facility will also double as a Muslim community center.