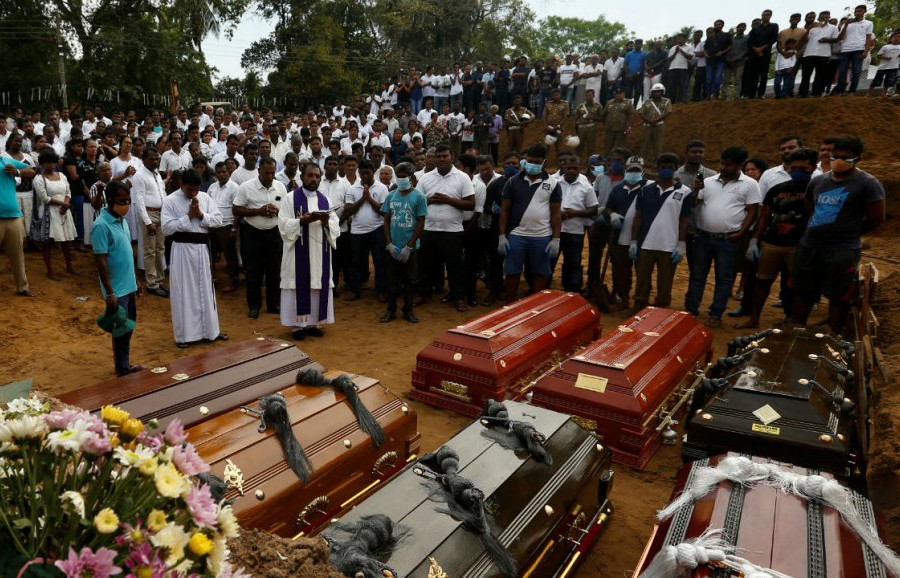 NEW DELHI —  Sri Lankan President Maithripala Sirisena has asked two top security officials to resign in the wake of the deadly Easter Sunday blasts, as officials revealed new details about the suicide bombers who carried out the attacks that killed more than 350 people.

The president’s call to the police chief, Pujith Jayasundara, and defense secretary, Hemasiri Fernando, to step down came a day after he promised in a televised address to take stern action against officials who did not share with him the intelligence alerts that came from India days prior to the bombing of churches and luxury hotels. The president also holds the defense portfolio.

As the government faces an outpouring of public anger over the failure to heed the warnings, senior officials admit it has been a “major lapse.”

Sri Lankan officials said Wednesday the nine suicide bombers included two brothers from an affluent business family involved in the spice trade and a woman married to one of them. She was killed in an explosion when police closed in on her in a house in Colombo hours after the attacks.

At least one of the bombers had studied in Britain and probably did his postgraduate studies in Australia, according to junior defense minister, Ruwan Wijewardene.

“They are financially quite independent. So that is the worrying factor in this,” he told reporters. “Some of them have I think studied in various other countries, they hold degrees, law degrees, they’re quite well-educated people,” he said.

They were breakaway members of two little-known extremist Muslim groups that have been blamed for the attacks, according to Wijewardene.

They were breakaway members of two little-known extremist Muslim groups that have been blamed for the attacks, according to Wijewardene.

The profile of the bombers “does not fit into a particular stereotype of a radical or an extremist, so it has gone much deeper in society and so it is going to be much more difficult to contain,” warned Paikiasothy Saravanamuttu, the head of the Center for Policy Alternatives in Colombo.

In the wake of claims of responsibility by the Islamic State for the serial blasts, the minister said the bombers could have been funded and ideologically inspired by the group. Islamic State has provided no substantive evidence for its claim, and Sri Lankan authorities are investigating whether the attackers had any links to international organizations.

A team of FBI agents is in Colombo to assist the investigation, according to U.S. ambassador to Sri Lanka, Alaina Teplitz.

“If you look at the scale of the attacks, the level of coordination, the sophistication of them, it’s not implausible to think there are foreign linkages,” she told reporters in Colombo. The threat of more attacks has not been ruled out — Teplitz said there are believed to be “ongoing terrorist plots.”

Sixty people have been arrested in connection with the attacks.

As the death toll rises, the attacks are now being counted as South Asia’s worst. Many of the 500 injured are battling for their lives in hospitals.

In a nation that is still on edge following the blasts, two explosions in Colombo on Wednesday triggered panic, but police described it as a controlled explosion of suspicious motorbikes.

Scenes of grieving and mourning continue to wrack the country as families hold funerals for their loved ones. Mass funerals were conducted for a second day outside St. Sebastian’s Church in Negombo town while the morgue at Colombo is still crowded with relatives lining up to identify their family members.

The latest blasts have put the spotlight on the religious extremism rearing its head in the island nation, where Christians and Muslims have lived relatively peacefully with the Buddhist majority, although anti-Muslim prejudice on the part of Buddhist nationalists has triggered some violence recently.

Christians, who were among the primary targets of Sunday’s attacks, also have faced some threats from hardline Buddhists, but this is the first time that radical Islam has posed a threat. While Sri Lanka is a Buddhist majority country, Hindus, Christians and Muslims make up about 30 percent of the population.

“It is worrying, these are entirely locals who had some sort of international connection,” said analyst Saravanamuttu. “We have to move fast to curb it, and get rid of the dissension within the government as well.”