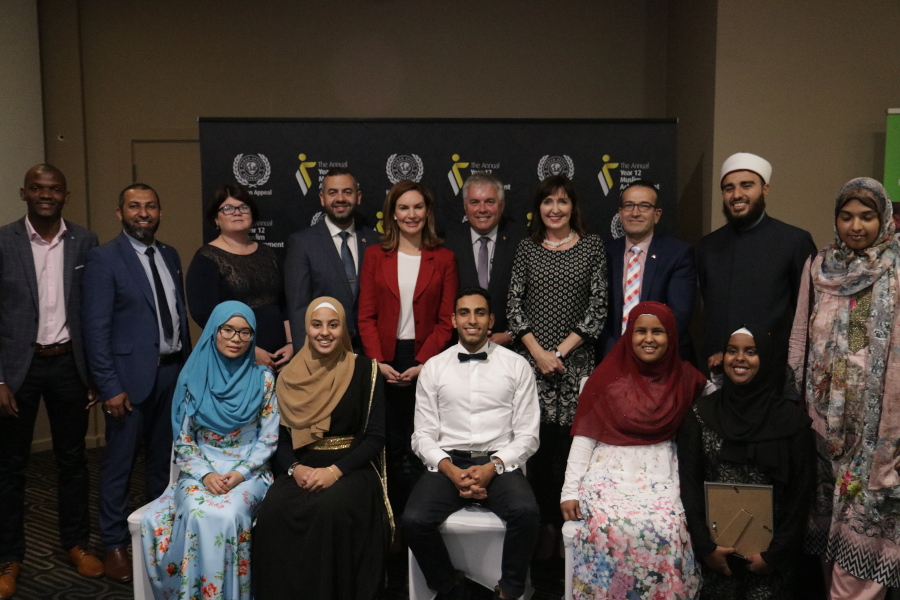 Human Appeal Australia hosted its 12th Annual Year 12 Muslim Achievement Awards in Perth, Brisbane, Sydney, Adelaide and Melbourne over the previous two weekends. Year 12 students who achieved an ATAR score or equivalent of 90% or more in 2018 were invited to register for the awards. Various respected members of the community, politicians, school principals, businesses and family members attended ceremonies in the five cities. An incredible two hundred and fifty-seven students were honoured for their hard work and awarded certificates of recognition and valuable gifts. (Article continues after gallery below.)

Brisbane was next on Saturday 9th March honouring nine students. Human Appeal’s Abdnaser Ali Orphan Sponsorship and Community Development Manager welcomed guests and spoke of the importance of recognising both outstanding effort as well as achievement. The keynote speakers were Farouk Adam, president of Muslim Business Council, Mohammed Ally, CEO of Australian International Islamic College, Dr Ray Barrett, the principle of Islamic College of Brisbane and Habib Jamal, newly elected president of Islamic Council of Queensland. Mr Habib Jamal addressed the Award Winners as the Future Muslim leader and delivered beautiful advice. Dr Ray Barrett amused the crowd with the TEN leadership qualities displayed by our prophet Muhammad SA. The MC of the night was Dr Mustafa Ally from Crescent Community News, who ensured that the program ran smoothly. He kept the crowd engaged and laughing with his vibrant and jolly comments. Lastly, Imam Akram Buksh, Manager of Human Appeal QLD office, thanked all for joining and making it a success.  The event recognised their hard work and dedication and acknowledged the great support of their parents.

On Sunday 10th of March, the ceremony in Sydney awarded the largest number of students with a total of one-hundred and twenty-two recognised. The ceremony was opened with the heart-warming recitation of the Quran by Sheikh Khaled Zraykah and co-MC’d by Omar Al-Jamal and Raghda Assoum. Students were invited with their parents to join various respected members of the community, school principals, politicians and businesses to attend the ceremony which was held in The Highline Venue in Bankstown. During the night they were honoured for their hard work and awarded certificates of recognition and several valuable gifts. Human Appeal Australia’s Director, Bashar Al-Jamal welcomed guests then various speeches were given by The Hon. Tony Burke, Federal Member for Watson; Dr Ibrahim Abu Mohammed, the Grand Mufti of Australia; City of Canterbury Bankstown Mayor Khal Asfour; Jihad Dib, MP; Hala Ramadan, Principal of Belmore Boys High School and Hajj Mohamed El-Mouelhy, Director of Halal Certification Authority. Overall the night was filled with a warm atmosphere of celebration and joy.

Overall, the five ceremonies held in Perth, Brisbane, Sydney, Adelaide and Melbourne, were a fantastic opportunity for parents and communities to celebrate with happiness the proud achievements of these amazing 257 individuals.

“Your future contributions to the wider society as professionals, humanitarians, and thought leaders will benefit the wider public and should encourage a cultural shift away from perceptions of mistrust and hate toward a greater level of respect, understanding and appreciation of Muslim Australian communities. A special vote of thanks goes to the generous businesses and organisations that sponsored the 12th Annual Year 12 Muslim Achievement Awards. Human Appeal Australia congratulates all the Year 12 students of 2018 for their success and wishing them all the best in future” said Bashar Al-Jamal, Human Appeal Australia director

Human Appeal Australia, Always with you on the road to goodness.