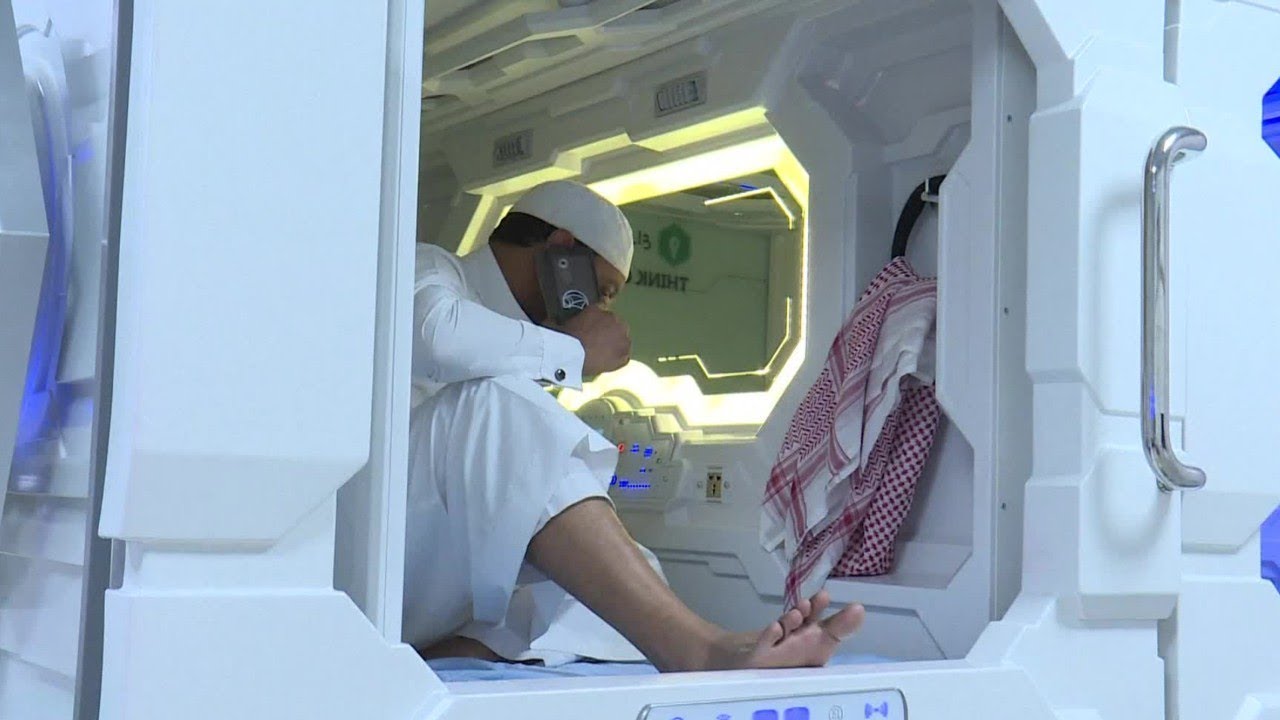 The hajj pilgrimage to Mecca, Saudi Arabia, that Muslims around the world make every year has just started.

Over two million followers of the Islamic faith will be gathering around the holy city, which has seen a 7% rise in visitor numbers this year compared to last year.

In past years, there have been devastating stampedes as a result of overcrowding and structures collapsing.

Now, Saudi’s cutting-edge logistics and expansion projects are working to help pilgrims have a smoother and safer experience.

However, with such large numbers of visitors, hotel overcrowding – and this year’s weather and flood warnings – it can still be difficult for pilgrims to find a place of rest.

Accommodation is also in high demand around the site and is not within financial means for many pilgrims.

So, to modernise old practices (which sees many people sleeping outside in tents) and utilise space, nap pods reminiscent of Japan’s famed capsule hotels are being tested.

The Kingdom is testing these capsule rooms in the western city of Mina as faithful pilgrims gather for the six-day hajj.

Those seeking rest from the strenuous journey and rituals can use any of the 18-24 pods available for free.

Each fibreglass pod is less than three metres long and includes a mattress, clean sheets, air conditioning and a lit mirror on the wall.

Mansour al-Amer, head of the charity offering the capsules, the Haji and Mutamer Gift Charitable Association said it’s all about traveller comfort.

‘We are always thinking about pilgrims and how to make them more comfortable during the rituals of hajj,’ he said.

‘The idea already exists globally, in Japan for example, and in several cities across the world.

‘We believe it’s extremely well-suited for crowded places in our holy sites and in Mecca.’

Organisers of the pods, which are imported from Japan, want those unable to afford hotels to be able to rest while travelling.

Each napper will be given access to the capsule for three hours and then asked to hand it over to the next person. Workers will sterilise each capsule before the next occupier settles in.

‘The capsules work through a share economy, like bicycles that you can rent for an hour and then leave for someone else,’ added Amer.

The capsules come in addition to the launch of Saudi Arabia’s ‘smart hajj’ initiative, which aims to help pilgrims with everything from travel plans to medical care and tens of thousands more security personnel across the pilgrimage site.

The gathering comes to an end coinciding with Eid al-Adha, a three-day celebration for those not on the pilgrimage.