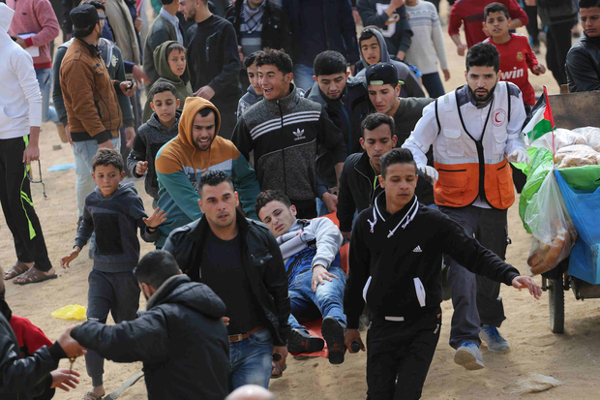 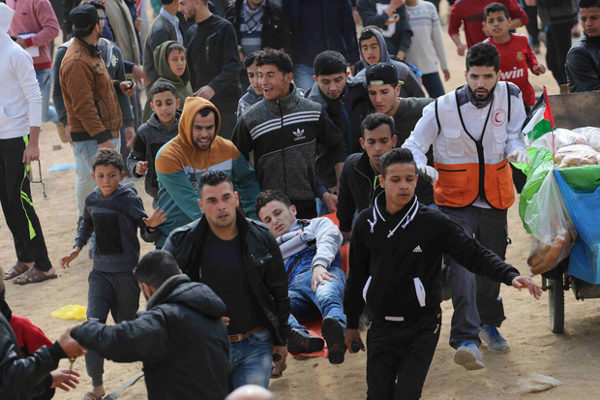 Amnesty International has called for a global arms embargo against Israel, accusing its forces of committing war crimes in the Gaza Strip.

The rights group has accused Israel of “carrying out a murderous assault” against Palestinians taking part on the “Great March of Return” in the Strip.

The Israeli military has killed 35 Palestinian and injured more than 5,5000 others during the weekly Friday protests that began on 30 March, Amnesty International said in a new report on Friday.

The call from the international rights group for a halt of weapons sales to Israel came as the UN High Commissioner for Human Rights Ra’ad al-Hussein put the death toll at 42 Palestinians, with no reports of Israeli casualties.

Zeid said Israel must hold to account those responsible for the deaths.

“The loss of life is deplorable, and the staggering number of injuries caused by live ammunition only confirms the sense that excessive force has been used against demonstrators – not once, not twice, but repeatedly,” Zeid said.

Wounds not seen since the Gaza war

Amnesty’s call for a global arms embargo following the country’s “disproportionate response to mass demonstrations” also comes after Middle East Eye revealed that the UK had approved the export of $445m, including sniper rifles, since the 2014 Gaza war.

Amnesty said that medical staff in Gaza City said that many of the wounds they have seen are serious injuries to the lower limbs, which are typical of war wounds observed during the 2014 Gaza conflict.

Amnesty, which also supports an arms embargo for Palestinian armed groups, said in most fatal shooting analysed, victims were shot in the upper body, including the head and chest, some from behind. Eyewitness testimonies and video evidence suggest many were deliberately killed or injured while posing no immediate threat to the Israeli soldiers.

Magdalena Mughrabi, deputy regional director at Amnesty International, said: “For four weeks the world has watched in horror as Israeli snipers and other soldiers, in full-protective gear and behind the fence, have attacked Palestinian protesters with live ammunition and tear gas. Despite wide international condemnation, the Israeli army has not reversed its illegal orders to shoot unarmed protesters.”

She added that the international community “must act concretely and stop the delivery of arms and military equipment to Israel”, and that inaction would “continue to fuel serious human rights abuses against thousands of men, women and children suffering the consequences of life under Israel’s cruel blockade of Gaza”.

Israel is one of Washington’s closest allies and a major buyer of US-made military equipment, but European Union nations, including, France, Germany, the UK and Italy, have licensed large volumes of military equipment for Israel.

Have UK-made sniper rifle parts been used in Gaza?

“Given the scale of the ongoing crisis, Amnesty re-iterates its calls for all governments to impose a comprehensive arms embargo on all sides to this conflict,” he said.

“Indeed, the UK Government’s own rules clearly state that it must stop selling any weapon which risk being used for these purposes and it is incumbent on them to explain in more detail what exactly the UK are selling, to whom and under what conditions.”

But, the call for an arms embargo is expected to be rejected in Westminster, where government ministers as senior Labour figures including the shadow foreign secretary, Emily Thornberry, have argued that Israel has a right to defend itself from military assault and “terrorist attacks”.

A review on arms sales?

Labour leader Jeremy Corbyn has also stopped short of calling for an embargo, and has instead called for a “review” of arms sales to Israel.

The US is unlikely to pay attention to the call from Amnesty, after the US ambassador to the UN, Nikki Haley, echoed the Israeli government’s stance on Thursday by blaming Hamas, the militant group and ruling party in Gaza, for “using children as cannon fodder“.

The organisers of the weekly march in Gaza have said the protests are intended to be peaceful, while Israel has claimed its forces have opened fire after rioting and fired towards “main instigators” to break to petrol bombs and stones being thrown at the border fence. It has also accused Hamas militants of being behind the protests.

Amnesty’s report says that some protesters have attempted to approach the fence, threw stones in the direction of Israeli soldiers or burnt tyres, but that social media videos and eyewitness testimonies show that at “Israeli soldiers shot unarmed protesters, bystanders, journalists and medical staff approximately 150-400m from the fence, where they did not pose any threat”.

Paramedics in Gaza have also told Amnesty staff of difficulties evacuating injured protesters due to the Israeli army firing tear gas canisters at them.