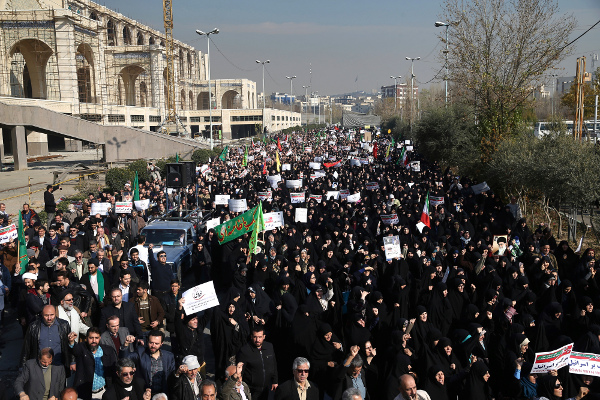 Thousands of government supporters held rallies across Iran on Saturday to mark the end of pro-reform protests that shook the country in 2009, as a third day of anti-government protests broke out across the country.

State television showed a rally in Tehran and marchers in the second-largest city of Mashhad carrying banners in support of Supreme Leader Ayatollah Ali Khamenei.

Saturday’s protesters vowed to defend the Iranian revolution against outside forces including the US, Britain and Israel but also called on Iranian officials to do more to tackle the country’s economic woes, according to the semi-official Fars news agency.

Following the announcement of the election results, supporters of defeated candidates Mir-Hossein Moussavi and Mehdi Karroubi took to the streets, mainly in Tehran, in daily rallies alleging election fraud.

As authorities suppressed the rallies, counter-protests in support of the revolution and against what was alleged as the foreign backing of the defeated candidates swept across the capital later that year and have been marked annually since.

The Iranian government warned people against further protests on Saturday as anti-government demonstrations sparked by anger over an array of economic problems reportedly entered a third day.

“We urge all those who receive these calls to protest not to participate in these illegal gatherings as they will create problems for themselves and other citizens,” said Interior Minister Abdolrahman Rahmani Fazli.

Social media postings indicated that a third day of protests broke out in cities including Tehran, Shahr-e Kord and Kermanshah, where a video showed dozens of protesters booing after police announced on a loudspeaker that any gathering would be illegal. The footage could not be authenticated.

The semi-official news agency Fars said up to 70 students gathered in front of Tehran University and hurled rocks at police. A social media video showed them chanting “death to the dictator” in an apparent reference to Khamenei.

Regime supporters, gathered at the university entrance responded with “death to the sedititionists” and appear to have outnumbered the anti-regime protestors, videos posted on social media show.

Mehr news agency said 300 to 400 protesters were still around the university, causing the closure of nearby streets and heavy traffic congestion.

The numbers appeared to be smaller than demonstrations seen across other major towns and cities on Thursday and Friday, which had been sparked by high living costs but quickly turned against the Islamic regime as a whole.

State news channel IRINN said it had been banned from covering the protests that spread from second city Mashhad on Thursday to hit several towns and cities.

Mashhad was the site of demonstrations against the government on Thursday, where hundreds of people protested against high prices and shouted anti-government slogans.

Police arrested 52 people in Thursday’s protests, according to a judicial official in Mashhad, one of the holiest places in Shia Islam.

On Friday, police dispersed anti-government demonstrators in the western city of Kermanshah as protests spread to Tehran and several other cities in the largest wave of demonstrations in nearly a decade.

The US State Department said in a statement that it condemned “the arrest of peaceful protesters”.

US President Donald Trump tweeted that Iranians were “fed up with regime’s corruption & its squandering of the nation’s wealth to fund terrorism abroad” and warned Iran that “The world is watching!”

The recent unrest reflects discontent over rising prices and alleged corruption, as well as concern over Iran’s costly involvement in wars in Syria and Iraq.

The Revolutionary Guards, which along with its Basij militia spearheaded a crackdown against protesters in 2009, said in a statement carried by state media that there were efforts to repeat that year’s unrest but added: “The Iranian nation … will not allow the country to be hurt.”

“If the security and law enforcement agencies leave the rioters to themselves, enemies will publish films and pictures in their media and say that the Islamic republic system has lost its revolutionary base in Mashhad,” the state news agency IRNA quoted Alamolhoda as saying.

Vice-President Eshaq Jahangiri, a close ally of President Hassan Rouhani, suggested that hardline conservative opponents of the pragmatist president might have triggered the protests but lost control of them.

“Those who are behind such events will burn their own fingers,” state media quoted him as saying.

The protests spread to at least half a dozen cities on Friday, with some attracting hundreds of protesters and others thousands, the BBC reported. In some cities police in riot gear and on motorbikes clashed with demonstrators.

Social media footage of the protests showed protesters chanting “death to Rouhani” and “death to the dictator”. Other videos showed chants of “leave Syria, think about us,” as protesters criticised Iran’s military and financial support for Syrian President Bashar al-Assad.