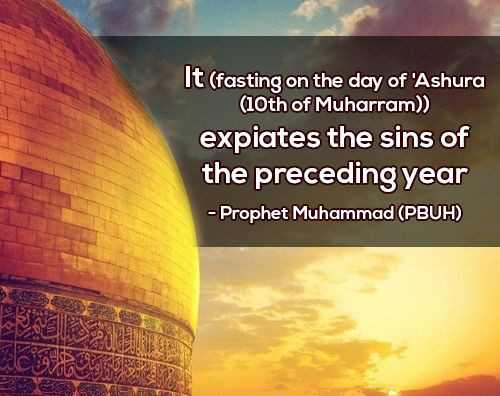 MV Editor’s Note: Depending on when the sighting was declared in your region, the Day of Ashura would be around the 20th of September 2017.

The tenth day of the first month of the Islamic lunar calendar marks a significant day in the Muslim calendar.

The tenth of Muharram is the day on which, Allah saved Prophet Moses/Musa (pbuh) from the tyrannical Pharaoh, that archetype of despotic authority. There are many pharaoh-like authorities who have appeared through history and there were those incorrigible standard-bearers of justice who opposed them. In the post-Prophetic period, one such person was Imam Husayn who, took on the corruption of despotic Yazid and laid down his life on tenth Muharram in 61 AH (680 CE); an event that serves as a milestone in the history of the faithful; the martyrdom of the beloved grandson of the Prophet Muhammad at Karbala in Iraq.

The valiant Prophet Moses did not fight Pharaoh to become king, neither did the righteous Imam Husayn take on the army of the corrupt Yazid merely to become caliph. Their effort was in fulfillment of moral obligation which serves as a universal message which has left a lasting legacy of struggle and resistance against corruption and injustice. The lesson is not only in that they were prepared to fight for what is right, but were also willing to die for it; selflessness not selfishness, humility not ego, principle not power.*

The Messenger of Allah (may Allah bless him and grant him peace) taught us to commemorate this day, primarily by fasting. He informed us that if we do so Allah wipes out the sins of the previous year.2 We may ask: if we have already fasted the Day of `Arafat then Allah has already erased our sins in the previous and coming year so what more can be gained from fasting `Ashura’? Some of the scholars mention that continuously fasting both days leads to a deeper erasure of one’s wrongdoings, protection from falling into sin in the future and also has the effect of wiping out the wrongdoings of one’s family and neighbours.

Why does fasting the Day of `Arafat wipe out the sins of two years whereas fasting the day of `Ashura’ only wipes out the sins of one year? One reason, the scholars say, is that the Day of `Arafat is a day attributed to Sayyiduna Muhammad (may Allah bless him and grant him peace) which is clearly superior to `Ashura’ which is attributed to Sayyiduna Musa (peace be upon him).

He recommended (may Allah bless him and grant him peace) that his Ummah also fast the day before or the day after so that our tradition be distinct from the tradition of the Jews.

We should also renew our repentance on `Ashura.’ The Messenger of Allah (may Allah bless him and grant him peace) said that it is a day on which Allah allowed a certain people to repent and He will continue to allow others to do the same.3

It has been narrated that if someone spends generously upon his family on the Day of `Ashura’ Allah will treat with him generosity for the rest of the year. Sufyan bin `Uyayna said, “We tried this for fifty years and all that we saw was good.” It has likewise been narrated that the one who gives charity on this day will have the reward of a whole year’s charity.

In Tarim people gather in Masjid Ba `Alawi on the eve of `Ashura’ to read the merits of the day and to make du`a. The day itself is a day of Eid. Children wear their best clothes, amusements are provided for them and gifts are given to them.

1 Narrated by al-Bukhari and Muslim

*Note the first two paragraphs of this article were taken from an article by Sadullah Khan on Islamicity.com – “Ashura – Lest we forget” and should not be attributed to Shaykh AbdulKarim Yaha’s blog or Ustadh Amin Buxton translation.