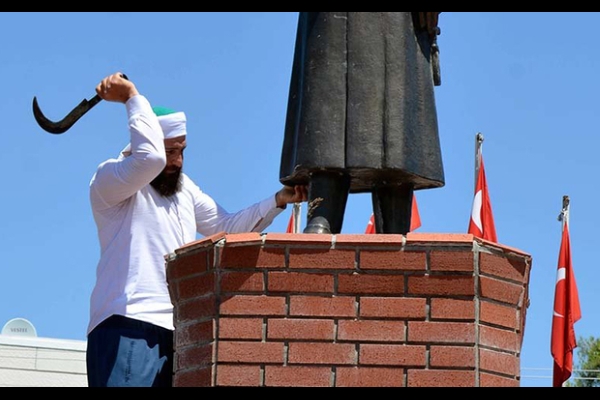 ISTANBUL, Turkey – It is an act that could lead to jail time, but such punishment has failed to deter a wave of vandalism against statues honouring modern secular Turkey’s founder Kemal Ataturk, which one of the attackers claimed represented “idolatry”.

At least seven attacks, most of them in August, have occurred since April, when the country narrowly agreed in a referendum to move to a presidential form of government at the expense of parliamentary power, in what many supporters likened to the dawn of a “new” Turkey.

However, the attacks on statues honouring Ataturk, a revered figure even for many pious Turks, have heightened concerns for Turkey’s secular nature under the new system, instigated by the Islamist-rooted AKP party and its leader, President Recep Tayyip Erdogan.

On 22 May, a man attacked a memorial to Ataturk with an axe in a central square in Adapazari. A crowd gathered and tried to lynch him before he was saved by police.

On 30 July, a street vendor named Mehmet Malbora shouted “there is no idolatry in our religion” as he hacked with a sickle at an Ataturk statue in Cumhuriyet square, Sanliurfa. He was arrested by police.

On 11 August, a man identified as Mehmet T dismantled a bust of Ataturk in a primary school courtyard. He was arrested by police and later sent to a mental health hospital.

A week later, attackers damaged a statue of a girl handing flowers to Ataturk in a park in the Black Sea town of Zonguldak.

On 24 August, a 48-year-old man decapitated a bust of Ataturk in a hospital forecourt in the southern province of Mersin. He was led away without restraints and photos showed him giving an Islamist salute.

Two days later, a 50-year-old man defaced a monument outside the Fine Arts faculty at the Anadolu University in Eskisehir, painting a large “X” over Ataturk’s words: “My only spiritual legacy is science and logic. I leave you no verse, dogma or calcified rules”.

The statue had been unveiled the previous day.

And the vandalism is not contained to representations of the founder. On 29 August, a bust of Zubeyde Hanim, Ataturk’s mother, disappeared from a park near the Golden Horn Metro Bridge.

The bust had been placed in the park in 1999 by the Turkish Mothers’ Association. The Istanbul municipality said it would “look into the matter”.

The boldness and public nature of the attacks have shocked commentators. Just as insulting Turkish officials constitutes a crime and carries possible jail time, so too does insulting Ataturk and his memory.

Ataturk is everywhere. Airports, schools, bridges and streets are named after him. His portrait is near omnipresent in offices and businesses, and statues honouring him adorn public squares. Shops sell cigarette lighters bearing his image.

However, his image is also divisive. Disciples of Turkey’s various Islamic orders, completely cast aside during Ataturk’s reforms almost a century ago, have seen their influence reduced under his secular state.

And the attacks come against a backdrop of what secularists say are moves to minimise references to the founder and republican values in schools, while promoting Islam – including teaching children the “true meaning of jihad”.

Uluc Gurkan, the deputy president of the Ataturk Thought Association, an NGO established in 1989 to revive and disseminate Ataturk’s message and values, told Middle East Eye he believed the attacks were being encouraged by some members of the AKP.

“It is with deep sadness that I say the ruling party encourages these attacks on Ataturk. The perpetrators feel reassured that they will be let off the hook,” Gurkan said.

“You then get some ambiguous condemnation of such acts by top officials to maintain appearances.”

Gurkan said the AKP was now trying to see how far it could push the boundaries, adding that any attempt to delete or degrade Ataturk in the nation’s eyes would end in failure.

He said Ataturk was still an inspiration for Turks many generations after his death.

“Ataturk and his principles continue to be revered and are just as valid today.

“They are experimenting to see how far they can push this degradation of Ataturk. But even they will realise that discarding Ataturk will only harm Turkey and they, too, will lose as a result.”

On the flip side, some pro-government media commentators have suggested these incidents of vandalism against Ataturk statues might be “provocations” by the AKP’s enemies to tarnish the party’s image.

Gurkan’s accusation against the AKP are in part based on previous statements made by the leaders of the party themselves. In a parliamentary speech in 2013, Erdogan, then the prime minister, referred to “two drunks” passing laws, which was widely believed to be a slur against Ataturk and his successor Ismet Inonu.

In 2016, parliament speaker Ismail Kahraman publicly called for secularism to be removed from any new Turkish constitution.

However, the AKP is not monolithic and has various different factions, including those from a range of Islamic orders, competing for dominance and influence in the party. This also results in different views voiced of Ataturk.

Erdogan is known for very rarely saying Ataturk when referring to the country’s founder. Ataturk (“father of Turks” in Turkish) was the surname Ataturk gave himself, after making it compulsory for all Turkish citizens to adopt a last name.

Binali Yildirim, the prime minister, has never taken that approach in public.

During the campaign for the April referendum, he often argued that the aim was not regime change and that the AKP was committed to the values of the republic.

The gulf in views on Ataturk and the republic’s values grows even larger among the party’s rank and file.

In 2015, an AKP MP likened the Turkish republic to a “commercial break” during a movie. She was not put on the party’s MP list to stand in the next election.

The most vicious criticism of Ataturk, however, is served on television by pro-government commentators, such as Kadir Misiroglu and Mustafa Armagan.

Playing into the hands of enemies

Mahir Aydin, a professor and head of the history department at Istanbul University, told MEE that such measures to portray a hatred of Ataturk were not likely to gain traction in society.

“This is not the first time this is happening,” he said. “These types of attacks on Ataturk and his principles were tried before in the 1950s as well.

“It will never achieve anything because what is being offered in its stead are outdated and discarded concepts.”

Aydin said the people of Anatolia and the eastern Mediterranean – cradles of civilisation – would not discard Ataturk’s republican values for some sort of semi-religious concept that was attempted centuries ago in Europe and then later by Ottoman sultans.

According to Aydin, Turkey needs to return to its republican “factory settings” if it wants to stay strong.

“Straying from Ataturk’s and the republic’s principles weakens Turkey. This is what the country’s external enemies also want,” he said.

“Any encouraging of attacks on Ataturk and the scrapping of republican principles from school textbooks plays into the hands of Turkey’s enemies.”