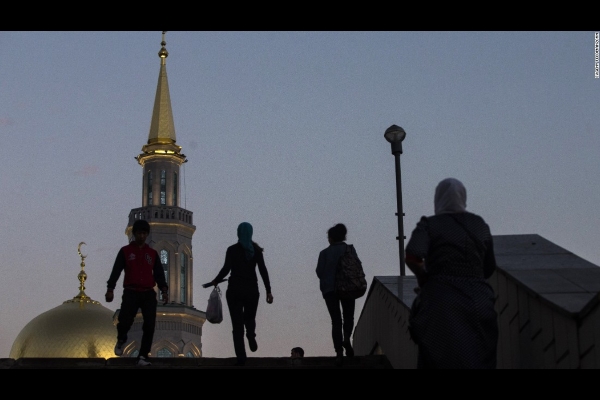 People pass by the Grand Mosque in Moscow.

MAKHACHKALA, July 14. /TASS/. Russia’s Federal Agency for Tourism (Rostourism) has been working on a program to attract tourists from Muslim countries, which particularly highlights visits to numerous Islamic heritage sites across the country, the agency’s chief Oleg Safonov.

“We are currently putting together a special program to attract tourists from Muslim countries to Russia, and we invite all interested parties to join the effort,” he said at a meeting dedicated to the 15th anniversary of the Russian Hajj Mission, held in Makhachkala, the capital of Russia’s North Caucasian Republic of Dagestan. “As for luring foreign tourists, we see a significant potential. Apart from visiting Islamic heritage sites located all across Russia, they could also attend large-scale international events,” Safonov added.

In this connection, the Rostourism chief mentioned the Nineteenth World Festival of Youth and Students, scheduled to be held in Russia in October. “Next year, we will host the FIFA World Cup and we would surely like to see more football fans coming from Muslim countries,” he said.

In many Russian regions with a high percentage of the population that professes the Islamic faith, conditions have already been created for Muslim tourists, Safonov pointed out.

“Rostourism has been cooperating with market participants to carry out a federal project dubbed Halal Friendly, which is part of the Russian Hospitality comprehensive program,” he noted.

“This project is aimed at making travel around Russia comfortable for Muslim people. The task is planned to be achieved by taking into account their demands concerning accommodation and food, as well as by providing them with all the necessary information,” Safonov added.

According to him, there are more than 2,500 religious landmarks in Russia. “While implementing the Russia’s Sacred Places plan, written information and photos related to religious sites located across the country are collected in order to put it all on the national tourism website and publish guidebooks for religious people and pilgrims,” the head of the Russian tourism agency said.