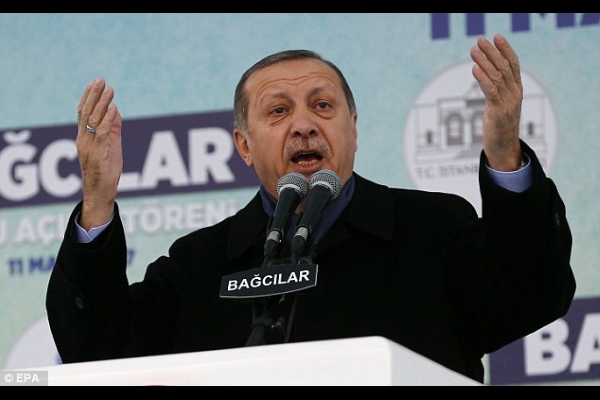 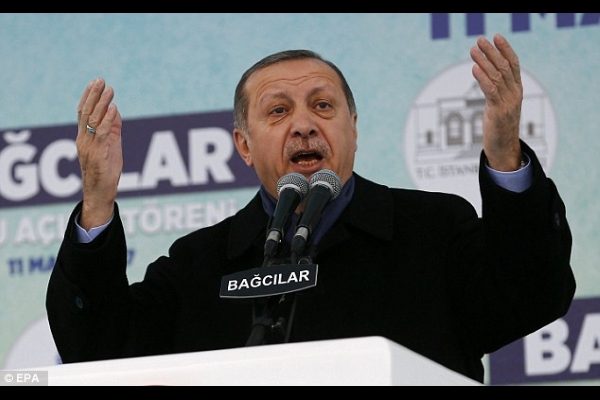 A diplomatic spat between NATO allies Turkey and the Netherlands over Turkish campaigning abroad for a referendum escalated on March 11 when Dutch authorities denied the Turkish foreign minister’s plane permission to land.

President Recep Tayyip Erdogan reacted angrily, threatening to respond in kind against diplomats from the Netherlands and describing the Dutch as “Nazi remnants” and “fascists.”

It is the second time in a week that Erdogan has used the word “Nazi” in criticizing one of Turkey’s NATO allies, having accused Germany on March 5 of “Nazi practices” for withdrawing authorizations for Turkish campaign rallies.

Dutch Prime Minister Mark Rutte told reporters on March 11 that Erdogan had made “a crazy remark” that was “way out of line.”

Rutte said he understood that Turkish officials are angry, and that the Dutch government “will do everything to keep the relations with Turkey as good as possible, as strong as possible.”

“But, of course, today was not a good day in the Turkish-Dutch relations,” Rutte said.

The Dutch government on March 11 barred the aircraft of Turkish Foreign Minister Mevlut Cavusoglu from landing, saying it had withdrawn the permission because of “risks to public order and security” caused by Cavusoglu’s proposed visit to Rotterdam.

Cavusoglu wanted to hold a rally to promote a Turkish referendum to give enhanced powers to Erdogan, which is scheduled for next month.

Rotterdam authorities had already barred him from addressing the Turkish rally there, with mayor Ahmed Aboutaleb saying that it would pose a threat to “public order.”

However, Aboutaleb had earlier said there was no question of him being excluded from the Netherlands.

Cavusoglu responded that Turkey would respond with harsh economic and political sanctions if he were banned.

The Dutch government explained the refusal in its statement by saying that the Turkish threat of sanctions made the search for a “reasonable solution” impossible.

Later on March 11, Erdogan threatened to retaliate by barring Dutch diplomats from flying to Turkey, as he said Netherlands’ behavior was reminiscent of Nazism.

“They are Nazi remnants, they are fascists,” Erdogan told an Istanbul rally. “Ban our foreign minister from flying however much you like, but from now on let’s see how your flights will land in Turkey.”

Officials in several major European cities have banned rallies by senior Turkish politicians to promote a a constitutional referendum among members of Turkey’s European diaspora.

Four planned Turkish political rallies in Austria and one in Switzerland were also canceled, amid growing signs of unease across Europe over Turkey’s drive to gain support for President Erdogan ahead of a referendum on April 16 to enhance his powers.

Turkish politicians want to attract the votes of the Turkish community in Europe ahead of the April 16 referendum on whether to boost Erdogan’s powers.

Similar cancellations in Germany led Erdogan to accuse Berlin of “Nazi practices,” a jibe which drew a sharp rebuke from Germany’s leaders, including Chancellor Angela Merkel, who labeled the comparison as “unacceptable.”

Relations between Turkey and the European Union have deteriorated in recent months, with Erdogan angry at criticism from EU members for waging a mass crackdown on opponents since he saw off a coup attempt last July.

Swiss police cited “significant security risks” for their decision to cancel a speech by a Turkish politician on March 10 in the evening.

Foreign Minister Cavusoglu is still looking for a new venue for an event on March 12 after one hotel near Zurich pulled out on security grounds and an alternative, in the city of Winterthur, was rejected as inappropriate.

The town of Hoerbranz, in Austria, cancelled a meeting with a former Turkish minister because it had falsely been labelled as a book presentation. Other events were scrapped in Linz, Herzogenburg, and Wiener Neustadt.

With reporting by AFP and BBC.