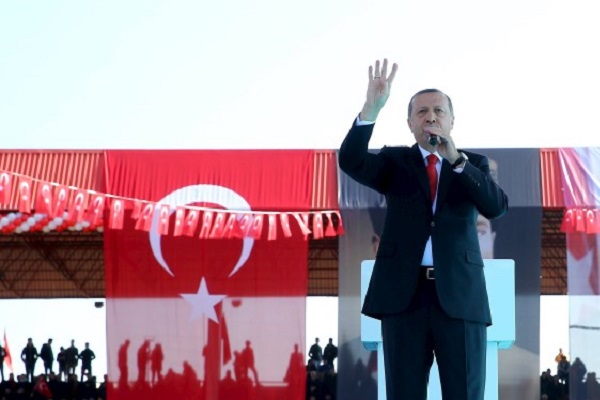 Turkish President Tayyip Erdogan makes his speech during a ceremony to mark the 101st anniversary of Battle of Canakkale, as part of the WWI Gallipoli campaign, in Canakkale, Turkey March 18, 2016, in this handout photo provided by the Presidential Palace. REUTERS/Kayhan Ozer/Presidential Palace/Handout via Reuters

President Recep Tayyip Erdogan could govern Turkey until 2029 with expanded executive powers under proposals the ruling AK Party hopes will go to a referendum next spring, officials who have seen the latest draft told Reuters on Wednesday, November 16, Reuters reports.

Erdogan and his supporters argue Turkey needs the strong leadership of an executive presidency, akin to the system in the United States or France, to avoid the fragile coalition governments that hampered its development in the past.

Opponents see the proposed change as a vehicle for Erdogan’s ambition, and fear it will bring increasing authoritarianism to a country already under fire from Western allies over its deteriorating record on rights and freedoms, especially after widespread purges in the wake of a failed military coup in July.

The AKP, founded by Erdogan a decade and a half ago, is aiming to hold a referendum on the issue next spring and is seeking support from the nationalist MHP opposition order to win parliamentary approval for such a vote.

Under the latest draft, presented to the MHP on Tuesday, Erdogan could assume the position of “acting” executive president immediately after the referendum if the changes are approved. A presidential election would then be held, as scheduled, when his term expires in 2019.

Under the constitution’s current two-term limit and provided he wins the 2019 election, Erdogan would be able to rule until 2024 only. But under the proposed executive presidency, the clock would reset, allowing him another two terms.

“We have come to a conclusion in our work on constitutional changes and will bring it to the parliament in the coming days,” Prime Minister Binali Yildirim told a conference of AKP provincial heads in Ankara on Wednesday, without giving details.

“We will continue to seek a base for consensus with the other parties. After that, the decision lies with the people.”

According to two senior officials who have seen the draft, the president would be eligible to serve a maximum of two five-year terms and would be able to issue presidential decrees on most executive matters without the need to consult parliament.

The president would have up to two deputies and would directly appoint the heads of the military and intelligence agencies, university rectors, senior bureaucrats, and some top judicial bodies, expanding the powers of the role, the officials said.