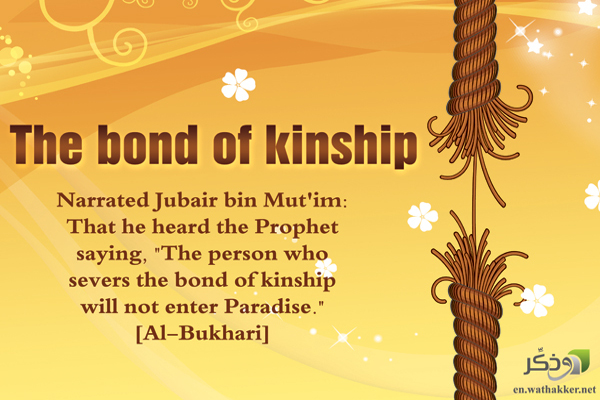 Just imagine: if a close relative hurls insults at us in a very nasty manner, what would be our reaction?  Obviously the first reaction from us would be a bout of anger. A very hot tempered individual from us would at once throw a punch at that person who has insulted us. If we can restrain from punching him then we would react by insulting him back. Yet, someone from us who is cool-tempered would try to swallow that insult and would let him go. Of course the feeling of resentment would remain and as a result we might cut off our connections with him to such an extent we would not even talk to him.

On the contrary, instead of acting on the principle of ‘tit for tat’, how many of us would reciprocate that insult with not only forgiveness but also kindness? The answer obviously is: hardly any of us! But then, that is exactly what we are required to do as we can see from the Hadeeth quoted below:

Abdullāh ibne-‘Amr Radiallāhu ‘anhuma narrates that Nabi Sallallāhu ‘alaihi wasallam said: He is not strengthening bonds of kinship who just reciprocates the conduct of his relatives; but the one, who joins his ties of relationship when they are severed, is strengthening the bond. Bukhāri.

In Islām the bonds of kinship and the rights of other Muslim brothers and sisters play a pivotal role in our lives. All Muslims are to show kindness, generosity, and respect toward both their nearest and most distant relatives.

We not only have to forgive them for the wrong that they might have done to us but to reciprocate it by being good to them. That is the most difficult thing to do, but then this is the real test of our Imān.

The high ranking and wealthy ones among you should not take an oath not to spend on their relatives, the poor and those who migrate in Allāh’s path. They should forgive and pardon. Do you not like Allāh to forgive you? Allāh is Most Forgiving, Most Merciful. (Qurān 24:22)

No sooner did Abu Bakr, Radiallāhu ‘anhu hear this than he resumed his cousin’s financial assistance, and, indeed, increased it over what he used to regularly provide.

We should always remember that some of the greatest attributes of Allāh Subhānāhu wa Ta’ālā are: Al-Ghafoor— the One Who Forgives extensively, exceedingly and Perfectly,  Al Gaffār – The Forgiving and Al-‘Afūw – The Pardoner, The Effacer, The Forgiver. He also sent to this world the Fountain Head of the most superior Akhlāq, His Beloved Nabi Sallallāhu ‘alaihi wasallam, as ‘Rahmatul-Lil-‘Ālamīn’, who was always ready to forgive even his arch enemies or the ones who had inflicted upon him the maximum harm.

This is how we are also expected to conduct ourselves. Instead of getting even with the one who has done us wrong in an offensive manner, we should try to act in a very sublime way and honour him with a gift or invite him for a meal.

At times we tend to drift apart from some of our close relatives or friends for any wrong they might have done to us. We hear of siblings not on talking terms with one-another for years, a son breaking ties with his parents, cousins at loggerheads with each other, one-time best friends not ready to even look at each other – the list is endless.

The main obstacle that comes in our way that does not let us reconcile with our relatives and friends is our arrogance. How can we allow such a quality that belongs to Shaytān, to dictate us in such a mater? A Hadeeth states: ‘Abdullāh ibne Mas’ud Radiyallāhu ‘anhu narrates that Nabi Sallallāhu ‘alaihi wasallam said: He will not enter into Paradise who has the smallest particle of arrogance in his heart. (Muslim).

At times, to forgive we are ready but our nafs (inner self) and Shaytān do not let us resume the old ties. The traces of bitterness or sometimes even malice remain there. A real Muslim should not hang on to this malice or even its traces. One of the branches of Imān states: Not to have malice or hatred towards anybody. In fact, we should be gracious enough to take the first step towards formal reconciliation and gain rewards from Allāh.

There is no need to go over the past once our estranged family member is in our presence. Forgiveness is the key to reestablishing our bond. So let bygones be bygones, even if in the innermost recesses of our heart we still feel that our kinsman wronged us. Our aim should be to resume our old ties with him or her with even more cordiality than before.

Regardless of how much time has passed since we have seen a family member or whatever transgression has made us keep our distance, let us grab the first opportunity to reach out to a relative that we have been alienated from.

It’s as easy as picking up the phone and inviting him or her to our home for a meal. The worst that can happen is that they turn us down or hang up the phone on us. Allāh Almighty is All-Knowing and it will not be out of His Knowledge that we tried to fulfill our obligation of maintaining family ties and He will InshaAllāh reward us abundantly for our desire to reconcile with our relatives for His pleasure.

In fact before we go to bed at night we should forgive all those who might have done any wrong to us. Thus we retire with a heart that is very clean and free from malice or even the slightest ill-feelings against anyone.

Quoted below is a very inspiring Hadeeth illustrating how a Sahābi gained entry to Jannāh simply by keeping his heart clean and free from malice:

When Nabi Sallallāhu ‘alaihi wasallam stood up, ‘Abdullāh Ibn ‘Amr RadiyAllāhu ‘anhuma followed the Ansāri to his house and said to him, “I had  a quarrel with my father and I have vowed that I will not go to him for three  days. If you allow, let me stay at your house till my oath is fulfilled.” He said, “Very well.” Anas Radiyallāhu ‘anhu narrates: ‘Abdullāh mentioned that he spent three nights with the Ansāri but did not see him worshipping at night, except that when he awoke and changed his side on the bed, he praised Allāh ‘Azza wa Jall and said: Allāhuakbar (Allāh is the Greatest), until he got up for Salāt-ul-Fajr from his bed.

‘Abdullāh said: I did not hear him say anything except good. When three nights had passed and I considered his deeds to be quite ordinary, I said to the Ansāri: O slave of Allāh! There was no quarrel and separation between me and my father but I heard Rasūlullāh Sallallāhu ‘alaihi wasallam saying that the dweller of Paradise is coming to us and you came out on all three occasions. So I decided to stay with you and see what (special) deed you perform. However, I did not see you doing anything extraordinary. What is that deed which raised you to the rank mentioned by Rasūlullāh Sallallāhu ‘alaihi wasallam?

The Ansāri replied: I have no deeds except which you saw. Abdullāh RadiyAllāhu ‘anhu said: When I turned to go away, the Ansāri called me back and said:  I do not have any (special) deeds except for the ones you have seen. However, I have no ill-feelings in my heart about any Muslim and I am not jealous of anyone to whom Allāh has granted a bounty. ‘Abdullāh RadiyAllāhu ‘anhu said: This is that which has raised you to that rank, and this is that which is beyond our ability. (Musnad Ahmad, Bazzār, Majma-’uz-Zawāid).

Even if we are not at odds with one of our kin but we might know of family members who are not preserving their ties of kinship then we can do our part as a Muslim by acting as a mediator to reunite them under the common flag of Islām.

A time for strengthening the family bond – Islamweb.net