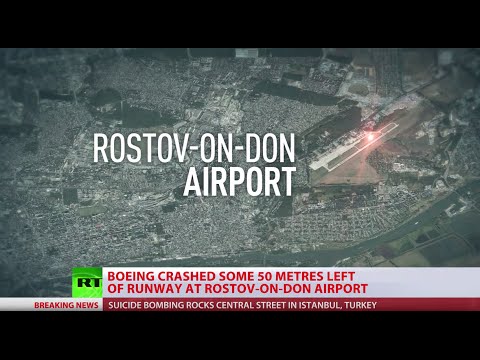 A passenger airliner from Dubai has crashed and burned while trying to land at the airport in the southern Russian city of Rostov-on-Don, killing more than 60 people.

The crash occurred early on March 19, and officials identified the plane as a Boeing 737-800 arriving from Dubai. The 62 people aboard — 55 passengers and seven crew members — were all dead, the local Emergency Situations Ministry said.

Officials were quoted as saying the likely causes of the crash were technical problems, crew error, bad weather, or a combination of the three. A local official said terrorism “is unlikely or even should be ruled out.”

The plane’s flight recorders have been recovered. Officials said there was no indication from the crew of a problem prior to the crash.

FlyDubai airline said on its Facebook page: “We are aware of an incident involving our flight FZ981 from Dubai to Rostov On Don. We are investigating.”

Russian President Vladimir Putin spoke by telephone with Rostov Oblast Governor Vasily Golubyov and ordered him to provide aid to relatives of the victims.

Presidential press secretary Dmitry Peskov told journalists Putin expressed his “deepest condolences to all those who lost friends and relatives in the plane crash.”

State news agency TASS reported that the Russian Investigative Committee, the country’s top investigative agency, said preliminary information indicated the plane was landing when it hit the ground and broke into pieces at the airport about 950 kilometers south of Moscow.

News reports suggested weather was a factor, with rain, poor visibility, and winds gusting at 80 kilometers per hour at the time of the crash.

According to the Flightradar24 website, the plane attempted once to land and then circled the airport for two hours before making the second, fatal attempt. The website also reported that an Aeroflot plane made three attempts to land in Rostov-on-Don around the same time before diverting elsewhere.

The Russian news channel LifeNews reported that the plane hit the ground a few hundred meters short of the runaway as it was making its second attempt at landing in conditions of poor visibility.

The channel reported that fragments of the plane were scattered over a length of about 1.5 kilometers.

Other flights, LifeNews claimed, had been diverted to Krasnodar because of the poor weather conditions.

The Emergency Situations Ministry said more than 500 rescuers and 60 emergency vehicles had been sent to the scene of the disaster.

Most of the passengers were Russians. A Russian Emergency Situations official told TASS there were 16 foreigners on board: seven from Ukraine, two from Spain, two from India, one each from Cyprus, Uzbekistan, Kyrgyzstan, Colombia, and the Seychelles Islands.

The same official added that 42 of the 46 Russians were from Rostov Oblast.

The Interstate Aviation Committee said a team of international experts has been dispatched to investigate the disaster.

FlyDubai, a budget carrier, was founded in 2008 and has a good safety record and relatively new aircraft. It has been flying to Rostov-on-Don since 2013.

The plane was reportedly last inspected in January.

With reporting by Reuters, AP, AFP, and TASS