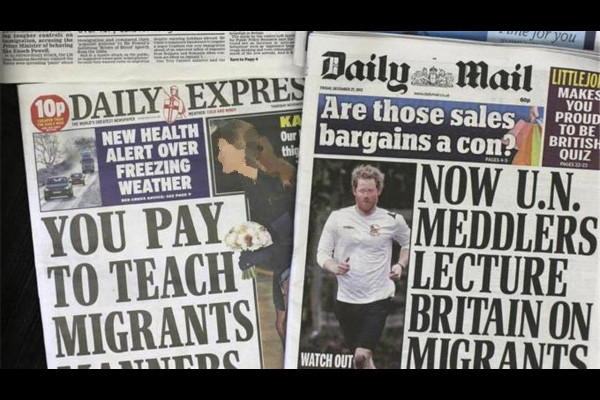 Anti migrant sentiment in Europe is reaching an all time high, as right wing groups from 14 different countries are coming together to protest what they call, “Islam conquering Europe.” At the forefront of the movement is PEGIDA, a German anti-immigration group that says this large coordinated protest will take place in early February.

Blatant racism toward refugees and migrants is on the rise throughout Europe. In the Netherlands, politician Geert Wilders passed out fake pepper spray to women saying they needed to guard themselves against, “Islamic testosterone bombs.” In France, a popular YouTube clip shows a video of a trucker trying to run over refugees attempting to cross the border. In the video annotations complain that the trucker briefly (and in their mind unfairly) lost his job for attempting to kill human beings. Oh except they refer to those human beings as ‘insurgents.’

Meanwhile the Danish government has passed a law that would seize any property from refugees that total over $1,450 dollars. Many experts have argued that such a law violates “fundamental property rights.”

But the examples hardly stop there. In Wales refugees were told they had to wear bring red identification wristbands or they would not be given food. That plan was later scrapped due to the obvious implications of ‘branding’ human beings.

Such branding echoes another scandal in the English town of Middlesbrough where asylum seekers had the doors to their homes painted red to identify their residences. According to a local MP, these homes were often singled out with feces smeared across the doors and stones being thrown at the residences.

Elsewhere in the U.K., Jayda Fransen of Britain First – an anti-Muslim group which has called Islam the “cancer of the world” – has promised to increase Christian patrols and mosque invasions within the nation. She has been quoted as saying that “the only way to save us is to head for the streets.”

And back in Germany the head of PAGIDA Tatijana Festerling told crowds that women needed protection from the “sex jihad” against them. She said Muslims had, “Started their wholesale terror attack against German women, against blonde, white women.”

This was a reference to the New Years attacks in Cologne Germany in which hundreds of women of all ethnicities were sexually assaulted and robbed by unknown assailants. Many described the attackers as Arab or North African, setting off anger over the possible danger posed by refugees inside the country. More than one Algerian asylum seeker has since been arrested for the attacks.

The worry, that refugees will organize terror plots (despite most terror plots being carried out by residents), or unfairly burden the European economy has become incredibly common. In fact, just looking at the news you might think that Europeans are the only souls in the world helping out with the refugee crisis.

In reality this couldn’t be further from the truth. Not a single country in Europe makes the top 10 for hosting the most refugees. Rather those spots are taken by countries with far fewer resources like Turkey, Pakistan, Iran, Ethiopia, Chad, Uganda, Kenya, Lebanon and Jordan.

According to Amnesty International, “Most rich countries are still treating refugees as somebody else’s problem. Hiding behind closed borders and fears of being ‘flooded’, they have conveniently allowed poorer, mainly Middle Eastern, African and South Asian countries, to host an incredible 86% of all refugees.” They go on to point out that the world’s wealthiest countries offer to resettle less than 10 percent of refugees every year.

However, it seems regardless of this small percentage, it is more than enough to tip anti-Islam sentiment over the edge.

But we should take a moment to remember that it wasn’t long ago that Jewish citizens in Europe were treated in much the same way. Their religion was branded as deadly and dangerous. Their “Zionist” agenda was hailed as a militant plot to take over the world, and they were absolutely viewed as deceitful economic migrants that hurt the European and world economy:

“So they wander complaining through the world, pretending suicide to awaken pity, and let children and women scream to arouse sympathy. They fall on their knees begging Dutch soldiers to shoot them, expecting a guilder for their cowardly comedy. They kiss the pavement of New York to be able to travel around as a chewing gum salesman. They do things that anyone else would find humiliating, but they see it as heroism instead…As far as we are concerned, they can wring their hands in their lifeboats until they look like old washer women. We do not care if ships sail the oceans and find no harbor.” – The Panic Party, 1939 anti-Semitic propaganda

In the 1930s, citizens throughout Europe were afraid that Jewish “foreigners” would corrupt European culture, killing children to sate their “dangerous religion.” As PAGIDA and various right wing groups march in February, to stop Muslims from “conquering Europe” and attacking “white women,” it might be a good time to remember what happened the last time such rhetoric was tossed around.