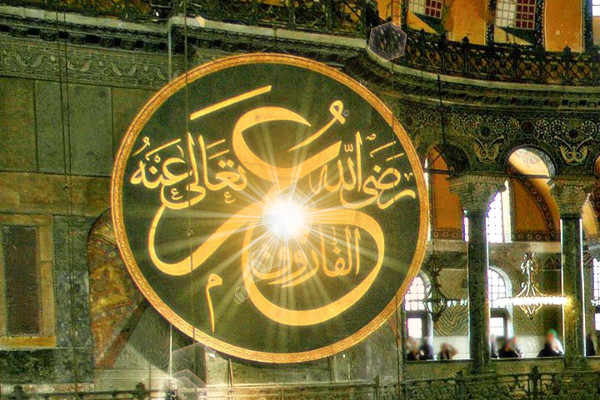 Michael H. Hart wrote a book entitled “The 100: A Ranking of the Most Influential Persons in History” in 1978. Several other authors have written similar books but this still remains a distinguished book in its category. The book is thought provoking and encourages the reader to see history from different perspectives.

Another surprise to many people was Michael Hart’s choice of Umar Ibn Al-Khattab (ra) among the 100 influential persons, whom he not only included among these 100 persons but also put him as number two on the second half (51 to 100) of his choice. Umar Ibn Al-Khattab (ra) is 52nd on the list. He ranked him higher than such famous men as Charlemagne and Julius Caesar. He further says that Umar’s brilliant leadership was responsible for the expansion of the Islamic territory and the enormous extent that it did occur under him. He further says that Umar Ibn Al-Khattab (ra) ordered the Muslim armies to leave the natives of the conquered land in peace and ordered the military personnel not to force the natives to convert to Islam.

In the parenthesis Michael put his note, “From the above, it is clear that the Arab conquest was more a nationalist war of conquest rather than a holy war, although the religious aspect was not lacking”. Michael Hart further says that Umar ibn Al-Khattab’s (ra) achievements are impressive and it would be a grave mistake to ignore his contributions to humanity. It should be noted that Umar Ibn Al-Khattab’s (ra) brilliant leadership was responsible for permanence of the territories that came under the Islamic role at that time and are still part of the Islamic world today.

Umar Ibn Al-Khattab (ra) is a pioneering figure in the Islamic world. He was a leader, a statesman, a pious and God conscious Muslim who showed respect for all individuals including non-Muslims and he ordered the Muslims to treat non-Muslims with respect. He showed us how to apply the Quranic injunction “there is no compulsion in religion.”

Under the leadership of Umar ibn Al-Khattab (ra) Islam spread widely not by the sword but by virtue of its beauty, simplicity, transparency, openness and the leadership provided by him. Another reason for the rapid growth of Muslim community was the conversion of some high-placed religious personalities from among the Jewish and the Christian communities. These religious personalities saw Islam as a continuation and affirmation of the Abrahamic faith. Ardkun, the Bishop of Damascus, accepted Islam after the Islamic armies entered the city under Khalid bin Walid. The followers of Ardkun became attracted towards the new faith and became Muslim. The chief administrator of the city of Shata in Egypt, famous for its textiles manufacturing, left his town with two thousand men and went to city of Damietta where the Muslim army was camped and embraced Islam with his followers.

The people of many cultures who accepted Islam faced new challenges. More complex questions regarding the Islamic way of life cropped up at the same time. Many of the questions could not be answered because clear rulings of the Holy Prophet or the Holy Qur’an were not available. The Qadis and Muftis appointed in towns and cities were Companions of the Prophet, yet they referred complicated questions to the Khalifah. The famous Sahabis who referred the question to Umar Ibn Al-Khattab (ra) are Abdullah bin Ma’sud, Ammar bin Yasar, Abu Musa Ash’ari, Abu Ubaidah bin Jarrah, Mughira bin Shuba and others. Umar ibn Al-Khattab (ra) gave his judgment after discussing these questions in the assembly of the companions. The discussions were conducted with the greatest freedom and acumen. Shah Wali-Ullah writes in Hujjatullah al-Baligha, “It was Umar’s practice to consult the companions and hold discussions with them, until the veils were lifted and conviction was attained. For this reason Umar’s dicta were accepted throughout the East and the West.”

It is said that his writings, his letters and official instructions were as powerful as his speeches. In a letter to Abu Musa Ash’ari he wrote, “People generally hate their ruler, and I seek protection of Allah, if my people should entertain similar feelings about me. Avoid vain suspicions and keep away from malice, and don not encourage people of cherish vain hopes, and be careful of Allah’s property, and guard yourself against evil men. If you find any people who are vindictively inclined towards the Muslim state, it is devilish inclination and must be put down by the sword, until they bow to Allah’s decision and turn to better ways”

In another letter to Abu Musa Ash’ari he said, “The thing that strengthens one in execution of work and that one should not procrastinate; for if you do so, your affairs will heap up and overwhelm you and you will not then be able to decide what to do and what not to do, and you will fail in your work.”

Umar Ibn Al-Khattab (ra) appointed Amr bin Al-As as the Governor of Egypt. Amr bin Al-As delayed remitting the revenue to the treasury. Umar ibn Al-Khattab (ra) wrote to him and reminded about the delay. Amr bin Al-As procrastinated. Umar ibn Al-Khattab (ra) sent him a strong letter, he wrote, “I understand that the thing that has kept you from replying is the fact that your subordinates are not good. They have made you a shield, and it is a disease for which I possess an effective remedy. I am surprised that I have written to you often and at length, but you neglected sending the revenue and have avoided giving straight answers. So Abu, Abdullah, don’t worry. Due shall be taken from you and you shall pay them, for as the river yields pearls, so will you have to render the dues.”

Umar ibn Al-Khattab (ra) used to end his speeches with following statement: “O God, let me not fall into an error, nor let me be called to account on unawares, nor let me fall into neglect.”

Umar ibn Al-Khattab’s (ra) actions speak louder about his character, his integrity and his love for the people in the Muslim state. He made rounds at night to gauge and evaluate the condition of the people. His achievements are reflection of his life.

Some of the Achievements of Umar ibn Al-Khattab:

Established a procedure to giving salaries from the public treasury to Imams and Muezzins.