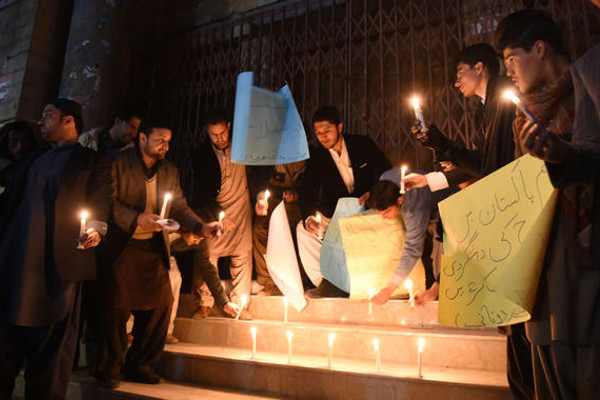 By: Ayaz Gul and Ayesha Tanzeem

ISLAMABAD – Pakistan observed a day of mourning Thursday following a gun and bomb attack on a university that killed 21 people and wounded dozens more.

Prime Minister Nawaz Sharif declared the mourning period to show solidarity with those who died when a group of four terrorists stormed the Bacha Khan University in the town of Charsadda on Wednesday.

The death toll rose to 21 overnight with the death of a student, one of 19 who were killed along with two university staff.

Military spokesman Asim Bajwa told reporters that troops, including army commandos gunned down the four attackers and conducted a “block by block” clearing operation before securing the entire campus.

The spokesman for the Pakistani Taliban, Mohammad Khorasani, says the group has nothing to do with the university attack, adding that non-military institutions are not on its list of targets. In a statement sent to VOA, Khorasani declared Wednesday’s attack against “Islamic Sharia.”

Earlier, a local Taliban commander had said he sent the four attackers to the university. There was no explanation for the conflicting claims.

Students and staff at the university told the VOA correspondent at the scene that some of the victims suffered both bullet and stab wounds.

Military spokesman Bajwa said telephone intercepts and other evidence collected from the scene have helped investigators to “swiftly achieve a breakthrough” in identifying the planners, where and how the attack was carried out.

But he refused to discuss further details saying it would undermine the investigation process.

He said the attack against a “soft target” like Bacha Khan University shows that terrorists have been “frustrated” by successes army operations have achieved against their strongholds in the tribal areas near the Afghan border.

He added that telephone calls received by the attackers on their cellphones showed they were in contact with people in Afghanistan.

Pakistani Senator Shibli Faraz of Pakistan Tehreek-e-Insaf told VOA that it was alarming that militants were active after a lull in terrorist attacks in the country.

Student, Tasbeeh Ullah, saw a gunman coming up the stairs. As he watched, the gunman took aim at him and started shooting. Tasbeeh Ullah ran up to the rooftop and jumped. He became unconscious and woke up in a hospital, with broken bones. Bacha Khan Unive

An official statement quoted Sharif as reiterating Pakistan’s resolve “to wipe out the menace of terrorism from our homeland.”

Amnesty International said the assault “violated the central principle of international humanitarian law by deliberately targeting civilians in what appears to be a war crime.”

“Whoever is responsible for this attack showed absolute contempt for life and civilian immunity. Armed groups in Pakistan must end all such affronts to humanity and commit publicly not to attack civilians,” said Champa Patel, Interim South Asia Director at the British-based group.

The university in the Khyber Pakhtunkhwa province has an enrollment of more than 3,000 students.

Charsadda is located at around 50 kilometers from the province capital of Peshawar, where militants linked to the Pakistani Taliban attacked a school in December of 2014 and massacred nearly 150 people, mostly children.

On Tuesday, a suicide bomber blew himself up near a security checkpoint separating Peshawar from the Khyber tribal district, killing at least 12 people. The Taliban claimed responsibility for that attack.

Chris Hannas contributed to this report.