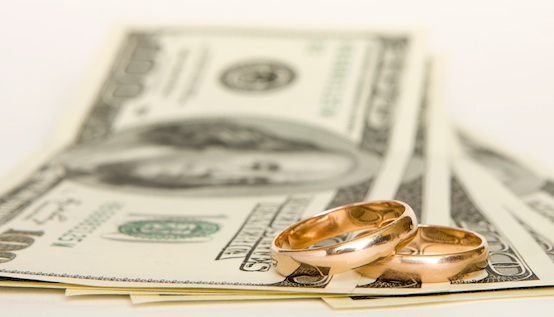 Wedding rings and money on a white background

According to Shariah, the husband has to maintain the wife whether she has wealth or not. We will be discussing the following points:

In legal issues there are rules and regulations that govern the issues. In love, rules are broken.

Money can become a bone of contention in a marriage. A husband and wife should not live like adversaries in a boxing ring. All the time fighting on financial issues.

In marriage, often laws are bent to maintain love and harmony.

We have the example of Hazrat Sara the wife of Ebrahim(a.s). She owned Hazrat Hajra, but she gave Hajra as a gift to Ebrahim (a.s).

“And He found you poor and made [you] financially rich.”

This was through the wealth of Hazrat Khadija (r.a).

It is because of this flexibility between the spouses, it is not permissible for the husband to give zakat to his wife and vice versa. Indeed it is very possible that if she gives her zakat to her husband that she will end up using or benefiting from the same money she gave. The same applies the other way round.