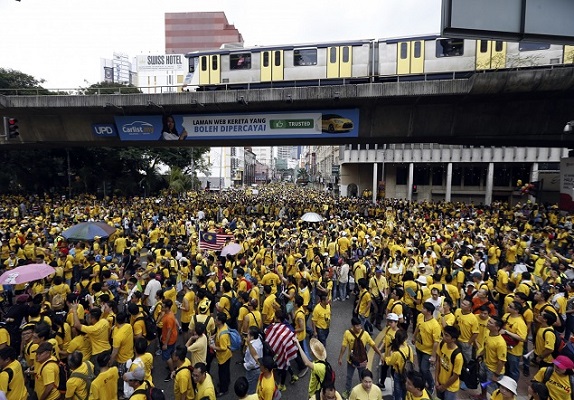 Lumpur (dpa) – Thousands of anti-government demonstrators on Sunday pressed on with their peaceful protests in the Malaysian capital demanding the resignation of Prime Minister Najib Razak, who faces accusations of corruption.

“And to remove him, the people must show people’s power”. Police estimated Saturday’s crowd at 25,000 while Bersih says 200,000 participated at its peak.

Najib, who has denied wrongdoing and says he did not take any money for personal gain, has not only ridden out the storm – he has tightened his grip on power through a series of deft steps to sideline would-be dissenters.

Najib retains significant support from the long-ruling Barisan Nasional coalition and from within his party, United Malays National Organisation.

Thousands of bleary-eyed protesters who slept on streets near the city’s Independence Square woke Sunday to mass exercises and a resumption of the previous day’s carnival-like mix of speeches, sing-a-longs, prayer and the ubiquitous snapping of selfies.

“This shows the solidarity of Malaysians, that Najib still has the majority support”, Jamal Yunos said.

He slammed the protests for tarnishing Malaysia’s image.

Najib initially rejected the revelation, but his cabinet ministers have since admitted the transfers, calling them “political donations” from unidentified Middle Eastern sources. Earlier two Bersih rallies, in 2011 and 2012, have been dispersed by police utilizing tear fuel and water cannons.

The government tightened security ahead of the rally.

The Bernama national news agency quoted Mr Najib as describing the patriotism of the protest organisers and participants as “shallow and poor”.

UMNO Vice-President Hishammuddin Husein said that Mahathir’s appearance at the protests had “crossed over the line”.

Official investigations into the scandal appear to have been stalled after Najib sacked his attorney general and reassigned other officials who were looking into the affair.

Authorities have also banned the wearing of Bersih’s traditional yellow attire and the group’s logo, a measure the protesters have roundly ignored.

Support for Najib’s National Front has eroded in the last two general elections.

For his part, Prime Minister Najib insisted on his blog he did not want this “provocation” to start in the first place, according to the BBC.

With Prime Minister Najib Razak presiding, the government held a parade attended by large crowds of flag-waving spectators in scenes broadcast live, symbolizing what reform advocates and analysts admit will be an uphill task effecting change in the government. It gained in 2013, however misplaced the favored vote for the primary time to an opposition alliance.